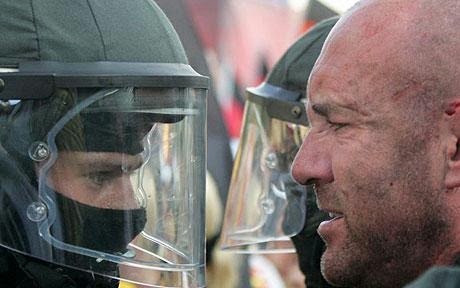 OK, so the image above is quite a huge exaggeration of what you are about to read, and believe me when I tell you that I look nothing like the guy who looks like he's about to chew the police officer's face off. But nonetheless, my match-day experience yesterday took a bit of a an unexpected turn, and here's my story.

During the World Cup, public servants such as firemen, emergency medical staff and police officers always have a bit of extra work to do. Whether it be in the host nation or other countries around the world, when fans flock to their local pubs to watch their country take on another, these (mostly) young men and women are on higher than usual alert because of the sometime dangerous consequences that follow a passionate outing filled with high emotions and booze. Yesterday, as I put on my red England shirt and headed to my local pub, it was no different.

It was devastating for me and my England supporting friends to see Luis Suarez take the life out of the Three Lions, scoring twice and leaving England on the verge of yet another World Cup elimination, but it was nothing us England supporters around the world have not experienced before. So three goals and three pints later I was saying goodbye to my fellow fans and heading out with a sickening feeling in my stomach after the sub-par performance from the team I have so dearly idolized since I was a little boy.

Although I tend to watch most matches, I was not in the mood to watch the following affair between the Greeks and the Japanese, instead, I went to see an old friend whom I have not seen in almost a year. It just so happens that he lives close by to where I was watching the match earlier, and it also just so happens that it’s in a particular neighborhood called “GreekTown”. The match involving the Greeks was all around us. Fans wearing blue and white were inside the bars, out on the street and driving by, waving their flags and chanting their favorite songs. The atmosphere was electric and the police officers on the street were paying extra attention to this neighborhood on this particular day. 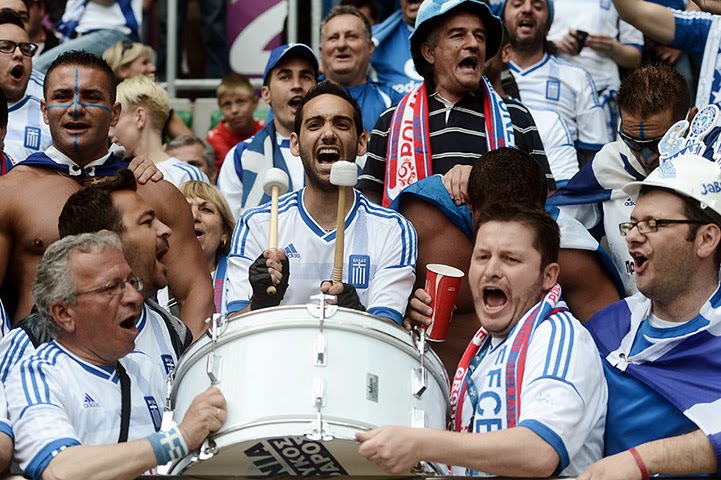 After a 30 minute chat with my old friend I headed home (or so I thought). As I was passing the bars on my way, I saw three Greek fellas I know, standing just outside one of the local bars surrounded by other Greek supporters, watching the match on the big screen, singing. I joined them for a bit as my football mentality just wouldn't let me pass a TV set with a match on, without at least catching a glimpse of the action. As I was standing there, listening and recording on my mobile this incredible atmosphere which the Greeks seem to provide the city with any time their team is involved in a match, a flare went off. One of the guys lit a flare just on the side of the street, a common way for football supporters to celebrate their passion in many countries. But this is Canada, and the officers were very quick to apprehend the “criminal” with the dangerous “pyrotechnic” device. I, a curious bystander, wanted a story for this very site, and approached one of the officers who was not involved in the arrest to ask a question.

Originally, my idea was to try and understand the rules against lighting such a flare in the middle of the street, and while I’m by no means oblivious to the risks involved, I was hoping for some detailed information. The cop, a female officer who seemed like a nice person from a distance, smiling as her colleagues were patting the Greek young man, taking away all of the other “celebratory” devices in his jeans, had but four words for me; “get out of here” she said. In hind side, that should have been enough for me to turn around and say “antío” (goodbye in Greek) to the supporters and the dull match, but her dismissing approach and rude manner in which she said it did not sit well with me. I’m not sure whether it was because in the back of my mind I asked myself “does she think I’m a trouble maker as well?”, or maybe it was because I don’t it like when figures with authority use their status to bully around the “common folk”, but in any case I tried to reiterate what I was after. I said to her again, “why are you guys arresting him? I just would like to know what the rules are against this.” She was obviously not amused and told me that if I don’t leave the “scene of investigation” I would be placed under arrest as well. I asked her where I can stand, at which point she replied “the curb” and that’s where I went. Now that I was not standing in the parameters of this “official scene of investigation”, another officer approached and proceeded to ask what I was after. I politely asked the same thing I did of his colleagues just seconds earlier, but his reply was so much better; “have you been drinking?” he asked me. I had nothing to hide, because by now the few pints I've had, had been long out of my system. "I had some beers" was my response, at which point he kindly asked me to get the f--k out of there. I was surprised with his response and replied with a "why are you being so f--king rude?". I think this was the point I should have avoided, but what was done was done. The officer told me that if I swore in public one more time I would be arrested, and just from the sheer shock of the threat and the fact that he himself swore "in public" right into my face about three seconds earlier my reply was "are you f---ing kidding me?". 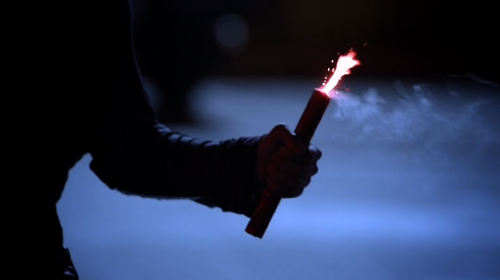 The next minute or so were quite a blur, but by the time I had come to my senses of what just happened I was handcuffed, sitting on the curb and had four officers "containing" me. Needles to say some of the Greek fans were not watching their beloved team on the telly anymore; I now had greater entertainment value than two squads trying to win the biggest football title in the world. Still in fairly positive spirit, sitting there on the curb, I decided to make the best of the situation and do what I do best, talk about the beautiful game. The four officers around me were all from different ethnic backgrounds, so looking at their name tags I proceeded to play a "let me guess your favorite World Cup team based on your last name" game. Officer Sullivan was not a fan of my newly invented game and I probably shouldn't have started with "sorry Ireland didn't make the World Cup", but the second policeman (who's last name I cannot recall) was more cooperating. I noticed he was of a Portuguese background and offered him my condolences for Portugal's heavy loss to Germany. He appreciated it, I could tell. The cop of Asian heritage told me he doesn't watch "soccer", so I stopped chatting with him because we obviously had nothing in common. 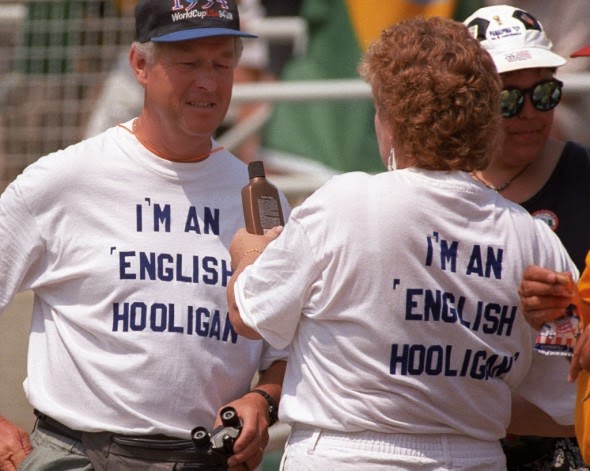 At last, my ride had arrived and I was taken into the station. I was "processed" and made fun of by some of the policemen in the station because of England's loss. At this point it was getting late, and I was just looking forward to having my call to let my wife know I was fine. Unfortunately, that call that was promised to me was never given. I knocked on the metal door of my holding cell for what seemed like (and in fact proved to be) hours, but my appeals came up empty as the officers just didn't pay attention. I was in a stone box without my phone and watch, and the only thing I had to take my mind off of the England match that I was now starting to replay in my head, were the scratched words engraved into those same metal doors by the wonderful people that were held in cell 19 before me. While "I am Leo" and my favorite "I'm innocent put in jel" (that's right "jel") are great reading material, I kept finding myself closing my eyes and the sickening images of Suarez were quickly popping back in my head.

I was released some hours later, after the officers deemed me sober by asking me "are you sober?" and me replying with a smile and two thumbs up. I tried to tell them that I wasn't even slightly intoxicated even when I first arrived, but although I was never even given a breathalyzer test, they could care less.

If I had to do it all over again I would do one of two things. I would either leave without demanding answers to my silly questions from the officers on the street, or perhaps I would in fact get drunk if I had known how slowly time runs when you are sober and stuck in a cell.

(Below is a the face of the "hooligan", enjoying my "freedom" watching Costa Rica slowly taking England out of this year's tournament. There are no police officers around me to ask questions of!) 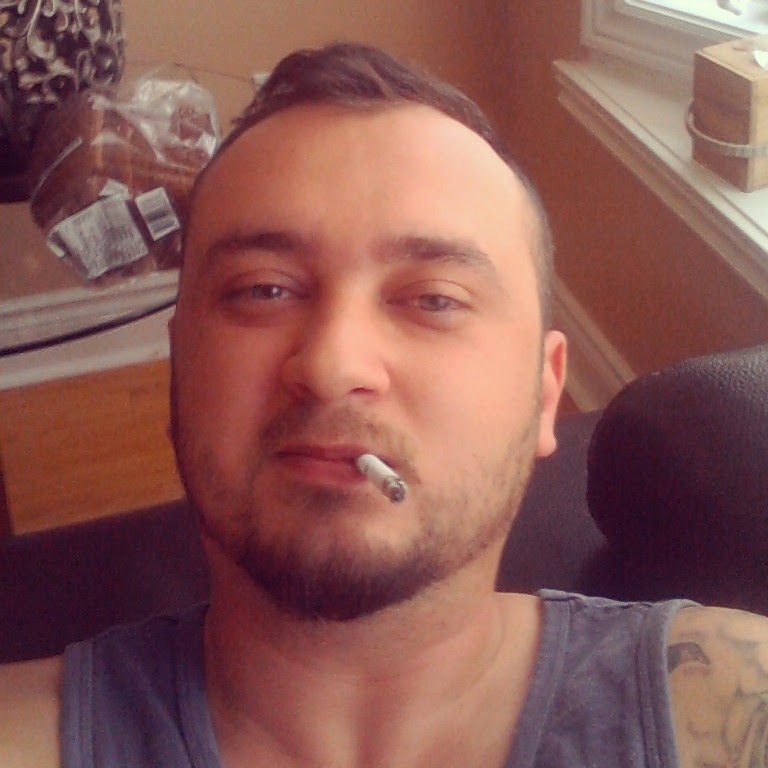 Have your own interesting story that's somewhat related to football? submit your stories HERE and get featured on our site.