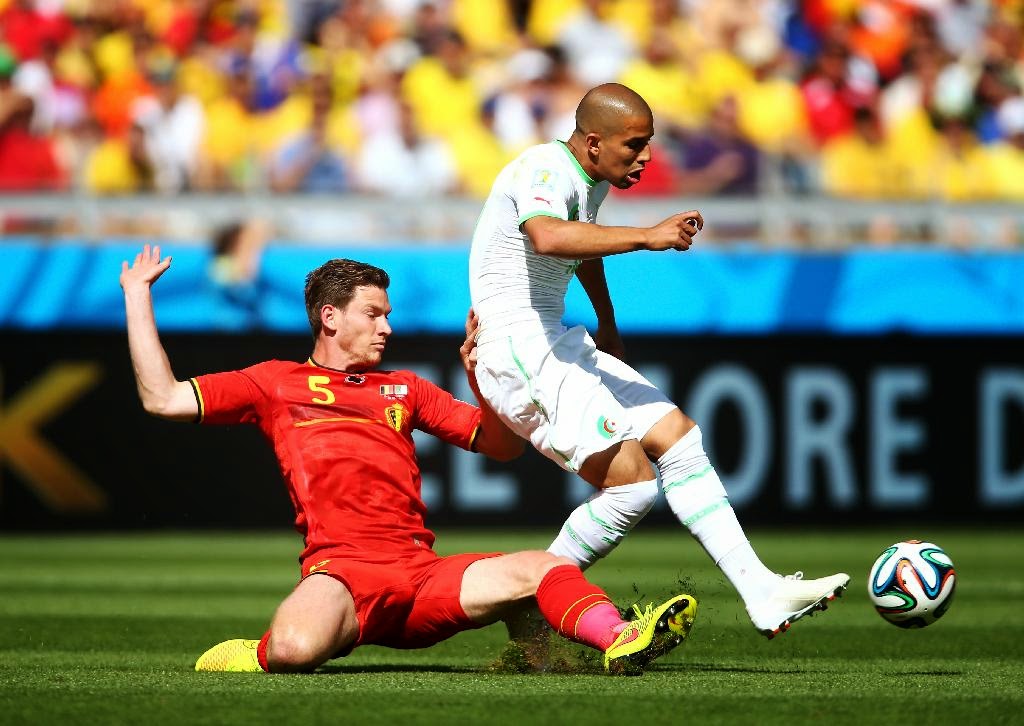 This so far terrific World Cup rumbled on into Day 6, as everyone's favourite Dark Horse in Belgium recovered from a goal down to come back and beat the determined Algerians. Having not scored a goal at the World Cup Finals since 1986, Algeria took the lead in the 25th minute when Jan Vertonghen clumsily pushed down an Algerian attacker. Valencia's Sofiane Feghouli calmly slotted home to give the North Africans the lead.

After going ahead, Algeria defended deep and didn't allow Belgium many clear shots at goal.

However, Manchester United misfit Marouane Fellaini, tied the game with an impressive header in the 70th minute. Another substitute, Dries Mertens, won it for Belgium with a powerful strike finishing off a quick counter-attack in the 80th.

Belgium have overcome their first test and will take a lot of confidence from battling back from adversity in this one. 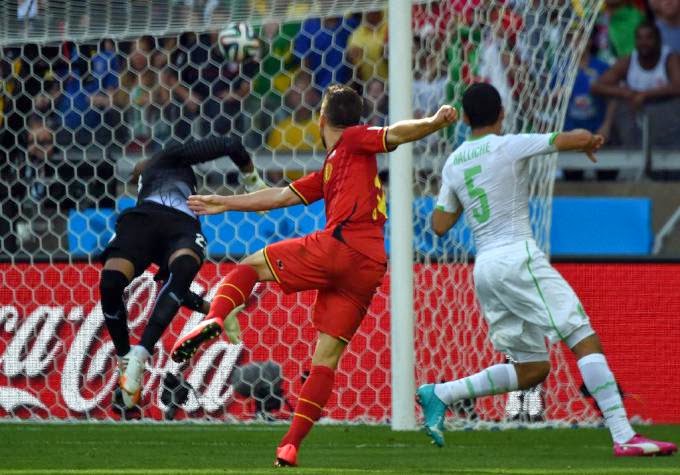 Although Brazil still looked a bit sloppy, and are ridiculously short on quality upfront with the likes of the constantly offside Fred and then the cumbersome Jo leading the line, it's hard to recall a more engaging match that ended 0-0 at a World Cup Finals. This encounter certainly bared no relationship to the dreadful Iran and Nigeria snore draw that took place 24 hours earlier.

This back and forth encounter featured good chances at both ends, some good midfield play at times, decent defending and at one end at least, stellar goalkeeping.

Despite the busy and inventive play of Neymar, Rafa Marquez rolled back the years to keep his side organized and resolute at the back. The star of the show though was Guillermo Ochoa. The Mexican keeper made several fine stops, but none better than keeping out a bullet header from Neymar that is already being compared to Gordon Banks immortal save against Pele in the 1970 World Cup.

Brazil's Julio Cesar, currently of Toronto FC, also made a fine late save to preserve the draw. The two sides are now firmly in the drivers seat to advance from the group with four points apiece after two matches. 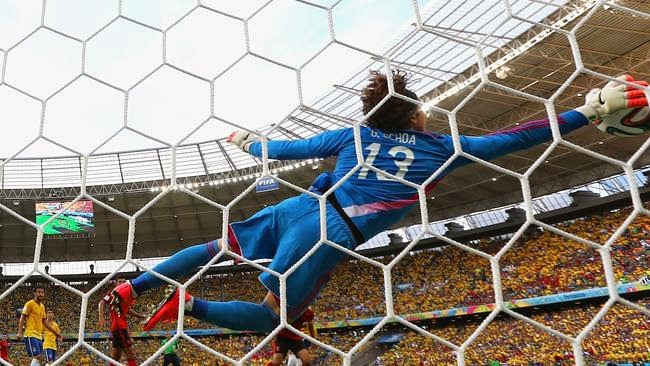 The final match of the day saw Fabio Capello's Russia do a fine interpretation of his England side of 2010, as they offered little in the way of excitement or invention. The Koreans themselves, who have had a rocky lead up to the tournament, did not contribute much to a dreadful first half.

Fortunately both sides showed a little more attacking intent in the second half, as they looked to test the rather inept looking keepers both teams had fielded. Looking uncomfortable all match long, it didn't come as that much of a surprise when Russia's Igor Akinfeev let a speculative 35 yard shot from Lee Keun Ho spill out of his hands and over his shoulder into the net in the 68th minute.

Russia fought back and in the 74th minute following a messy goalmouth scramble, substitute Aleksandr Kerzhakov fired in an equalizer.

Despite a vocal crowd the match played out to a rather dull conclusion as the teams settled for a point. 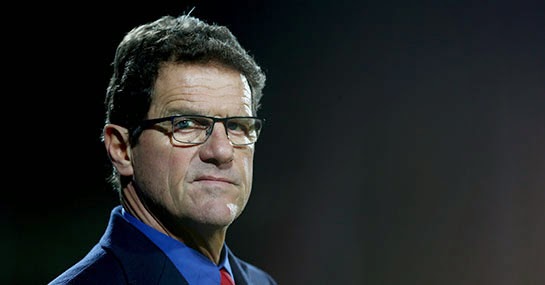 All three of our staff correctly predicted that Belgium would beat Algeria in the opener, but only Kon correctly guessed the score. No one on our staff expected the heroics of Guillerme Ochoa as he helped lead Mexico to a draw over Brazil. Iain was the only one who predicted a draw between Russia and Korea Republic, along with the correct score in that one. So we'll call today a draw between Kon and Iain as we look forward to Day 7 of the 2014 World Cup.
SHARE SHARE SHARE