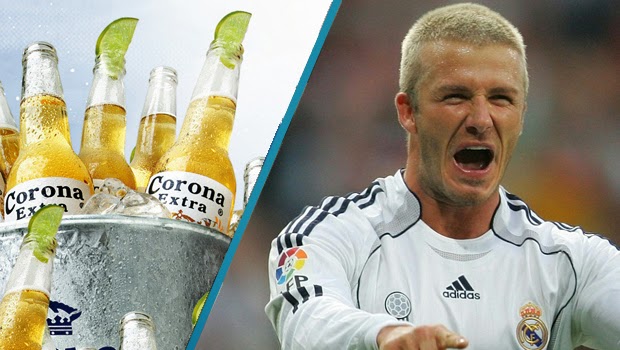 It may seem odd for me to pick the Mexican brew to compare to one of the most popular players in world football, but the similarities between the two are plenty.


If you ask most people around the world, everyone (and especially beer enthusiasts) will tell you that Corona is not a good beer. I tend to agree with that idea as it seems that the popular Mexican brew has very few of the characteristics of a “real” beer. Similarly, there are plenty of people around the world who will knock on David Beckham’s skills at any opportunity. And yet if you walk past a bar or a restaurant on a hot summer day, you will likely notice many people who are drinking this beer, the same way you will witness 35 year old “tough-guys” turn into something that resembles a 14 year old girl when the English midfielder takes to the pitch, or comes out of the back of the stadium post game.

Just like with Beckham, Corona may not be the best in the field of many choices, but its ability to market the product seems to keep people wanting more. David Beckham has been marketed as the pretty boy of football since his early career and that fact alone kept his fans around for a very long time. When I was 16, I thought that a bottle of Corona Extra was the best thing that ever happened to the world of beer, the exact same way many young football fans are attracted to the idea of David Beckham. When it comes to marketing, these two blondes have similar strategies; Hot imagery and a younger demographic were always in the plans of both. Corona with their beach scenes and Beckham with his underwear ads that made women around the world so sweaty, that only a whole bucket of the Mexican brew could take care of. The (super) light beer is traditionally served with a lime in its neck. Let’s call this lime “posh”, because just like Beckham’s wife Victoria, this piece of tasty treat does not make the beer necessarily better, as she did not make Beckham’s skill on the pitch better than it already was. But just like the lime to Corona, Victoria Beckham added to her hubby’s image and made him a strong brand, to the point where we will rarely see one without the other.

Overall both the footballer and the beer have their supporters, and similarly the people who will tell you that both are the worst things they ever drank in the bar or saw on the football pitch.  Beckham surely has had great times in his footballing career, just as Corona has its “great” times with underage drinkers who are trying to get hammered on something that tastes like grass-flavored water.