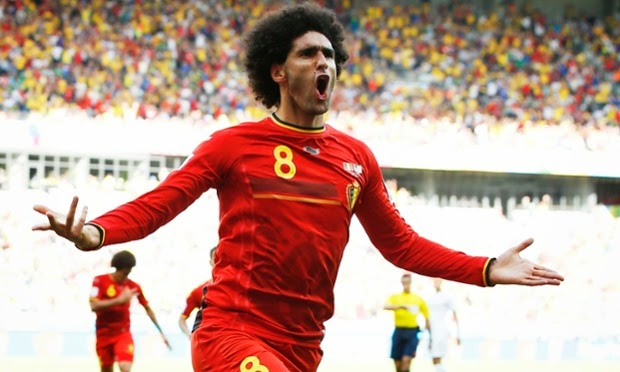 Belgium was looked at by many as the possible Cinderella story of this tournament and when all signs pointed towards them turning into a pumpkin, Wilmots pulled two rabbits from his hat in his best magic trick of the day.


There were so many expectations on this Belgian side that somehow it felt like they had too much weight on their shoulders. Going into their opening game against Algeria today, it was obvious that the pressure was there. So much pressure on such a young and unproven side is bound to show its ugly head somewhere, and this is where an experienced coach like Wilmots needs to come in and throw some water on the fire.

The fire was burning and it went into a full 5 alarm blaze at the 25th minute mark when Vertonghen fouled Feghouli in the penalty box. Feghouli would put it away and give Algeria a surprising lead in the game. At this point the ghost, goblins and all of the worst nightmares possible and imaginable were starting to creep into the minds of the Belgium players. So much hype, so much talent and down one goal at the halfway point of the first half, was too much for some, or so it looked.

Wilmots was the last man to have scored for Belgium at a World Cup, it happened many moons ago in the 2002 World Cup against Russia. So if there is a Belgian on that field that won’t fold like a cheap $2 waffle is Wilmots.

He makes three bold substitutions, perhaps bold is a strong word, since his teams is down a goal and are considered by many as one of the most talented teams in the tournament. Let’s call it astute. I am not a big fan of forwards turning coaches, but that is an argument for another day and another write up, but on this day Wilmots acted like a chocolatier, looked at his bench and opened up a box of the best Belgian chocolates his country had to offer. From that box he pulls out Mertens, Origi and Fellaini, and those my friends are three of the best chocolates Belgium had to offer on that bench.

I was surprised that he didn't start Fellaini and Dembele together, but that was not important at this time, because we were about to whiteness a quick turn of events, when doom and gloom was all but predicted by those pundits on TV and radio.

Fellaini scores an incredible header at 70th minute mark, 5 minutes after he had been subbed on. If that is not the Midas touch by Wilmots I am not sure what it is. The goal is incredible, the hang time would make Michael Jordan proud, and the hair on Fellaini would make him jealous.
Ten minutes later and Mertens scored the go ahead goal. Another one of Wilmots bench chocolates had scored and for the first time in the game Belgium was up 2-1 on Algeria. 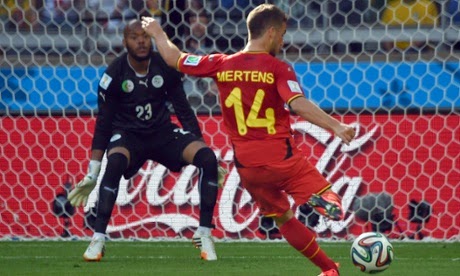 Belgium hadn’t played well, but for how little Algeria did, the lead was deserved. At this point it was almost like you could hear Wilmots say “Serenity Now”. The most important thing was done, now let’s not blow it. Belgium would hold on to the 2-1 result and win this game. They have given hope to those that want to see them become the Cinderella story of this tournament, and not the ugly pumpkin.

Everybody loves an underdog, and while Belgium is too good to be an underdog, they are a young and unexperienced team, but in their coach they have the wisdom and leadership that they need.
Today’s game was their first step on the big stage, and while they showed some stage fright and jitters, they did not crumble or gave up.