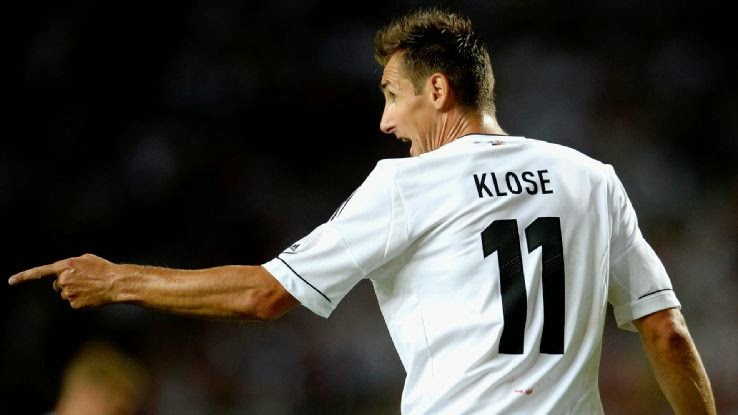 Miroslav Klose is the only active player in the World Cup Top 15 goal scorers and with his presence guaranteed at this years tournament he has an amazing chance of becoming the all time leading goal scorer at a World Cup.
He has been chasing this dream, after all he is German, and what more would a German striker want than to surpass the great Gerd Muller in the all time goal scoring list and put his own name in the history books.

Klose is currently tied with Muller for second with 14 goals. Muller was able to reach 14 goals in two World Cups and it has taken Klose three World Cups in order to reach the same number of goals. In comparison Ronaldo from Brazil is in first place with 15 goals and it took him four World Cups to reach that number.

Klose will be playing in his fourth and last, so this will be his last chance and putting his name number 1 on that list.

When Low announced the list of players going to Brazil this summer, two things surprised me. The exclusion of Mario Gomez and the inclusion of Klose. At the age of 35 Klose is no longer a spring chicken, and considering the depth Germany has i wasn't expecting to see him make the team, but when Mario Gomez was left out due to the injuries he had all season, it was obvious that Klose needed to be on this team.

I then decided to look at his numbers and i realized that since joining Lazio from Serie A in 2011 he has 35 goals in 80 appearances. If we compare those numbers to what he did in Munich from 2007 to 2011, where he scored 24 goals in 98 games, his numbers are only beaten by the incredible years he had Werder Bremen. At Bremen he scored 53 goals in 89 games. 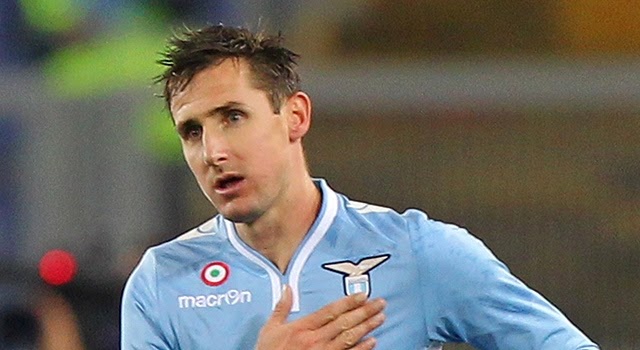 Having said that his numbers this season with Lazio were not great, actually they were pretty bad by his standards. He played 25 games and scored only 7 goals. In comparison to Mario Gomez who played 9 games and scored 3 goals, he was still coming out on top and now you could start to understand why Low picked one over the other.

I believe that regardless of his numbers, if he was fit he would be called up by Low. He has been a player that has given a lot to the German national program, and he has always been one of Low's men.


Everyone knew that he had in this last World Cup a chance at footballing history and if he is fit, even at the age of 35 he can still score important goals, so why not take him to the show and give him a chance at the record. If this was the mindset of Low for making this call, then i applaud him, because i think in football too many times we are quick to discard players based on their age without even considering what they have done for their country or club. 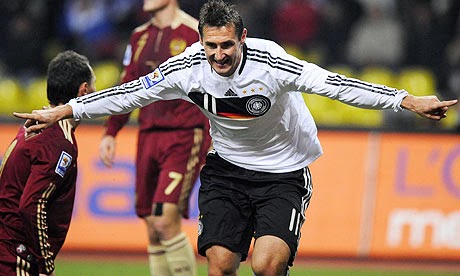 I am not sure what role he will play on the squad. A possible starter or a super sub coming off the bench in the second half, looking at scoring decisive goals. What i am sure is that he will take every chance, every minute that he is given to score two goals that he needs and break the record, and that is the kind of motivation you want in a player going into this tournament.