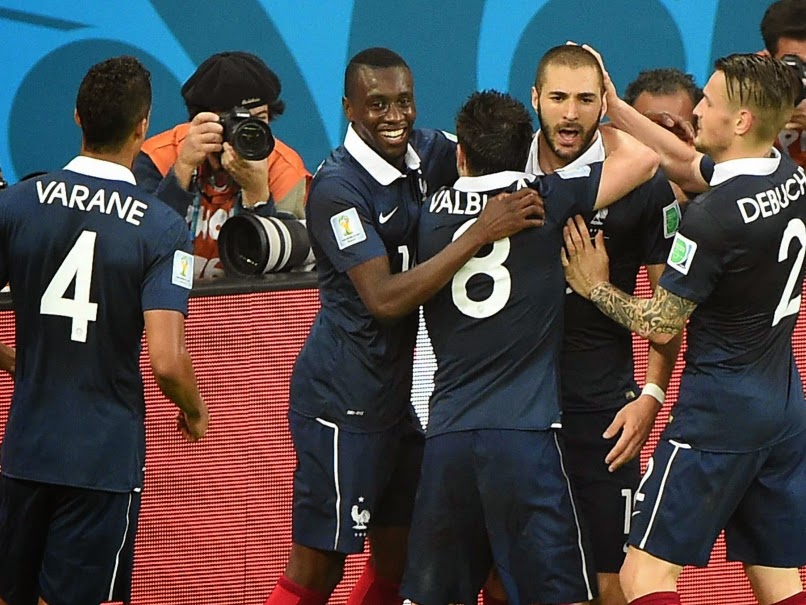 Ecuador came into the game with a very strong approach, wanting to control the midfield and ball possession. They were the strongest team in the first 25 minutes and that dominance resulted in a goal. Enner Velencia put Ecuador ahead at the 22nd minute mark with an unmarked header in the box. A free-kick from near the corner flag and a well-placed header and Ecuador was ahead in the game.

Ecuador was well deserving of the lead, they had been the better side up until that point and the Swiss team just looked uninterested. Ecuador continued to push for a second goal and always looked like they were closer to taking a 2-0 lead other than letting a 1-1 goal in. At halftime Ecuador had a 1-0 lead of Switzerland.

The second half brought us a different Switzerland side, and three minutes into the game, off a corner kick, Mehmedi scored with a great well placed header. It looked like the game dynamics were about to change, but an uninspired Shaqiri was not helping his Swiss side as most expected going in. He was distant from the game and unable to really control the flow of the game and be an offensive weapon.

The Swiss side looked disorganized, but Ecuador as time progressed seemed tired and unable to create any offense either. Almost like both teams were happy with the 1-1 score and able to go the rest of the game without taking any risks looking for a second goal.

When the game seemed heading to a closure and both teams taking 1 point from it, there comes Seferovic. The 2nd half sub would be the Swiss hero. Assisted by Rodriguez, Seferovic inside the box put his shot away giving the Ecuadorian keeper no chances of stopping it. It was a dagger in the hearts of the Ecuador players that were 1 minute away from taking 1 point from this game. The ref would blow the whistle a few moments later and the Swiss had the three points. This was the first time a Swiss sub has scored a goal in World Cup history. 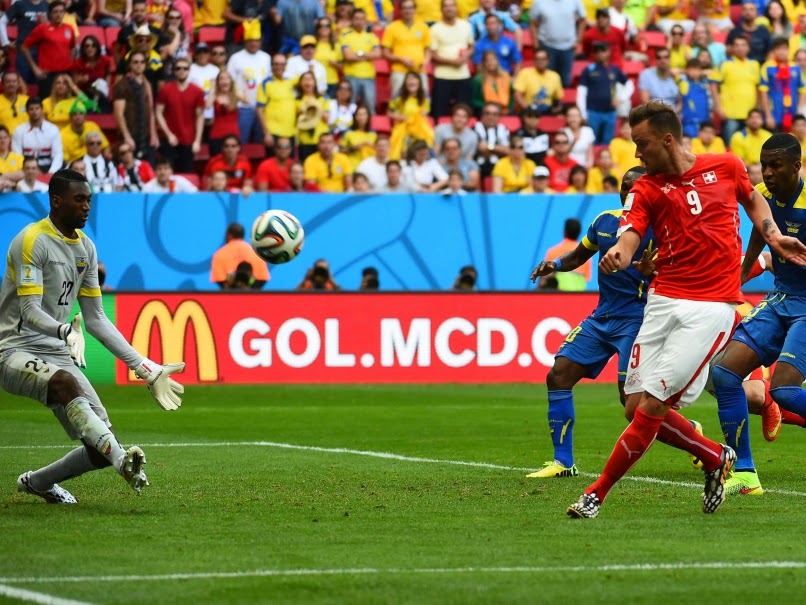 France started the game well and it looked like a very organized side that knew exactly what they wanted on the field. Honduras looked more concerned with the defending than attacking, both teams matched up perfectly on the field.

The game was being played in the midfield with both sides trying to block each other from moving forward with any danger, but in the individual battles France was winning. The individual quality of their players was obvious and they were making the difference. France had two shots hitting the iron and was the only team that looked capable of scoring in the first half.

The game was heating up and a harsh tackle from Palacios on Pogba, so the Frenchman retaliates with a kick. The ref decided to give both a yellow and keep both teams with 11 men. This yellow would prove to be a key element in the outcome of the first half. In the final minutes of the half, Palacios once again pushes Pogba from the back in the box and sees his second yellow and consequent red card. France is awarded the penalty and Benzema puts France up 1-0 at halftime. The lead was well deserved for what the French had done so far in the game.

Going into the second half with a 1-0 lead and with Honduras down a man, it was obvious that it would take an epic catastrophe for France to find a way to lose this game.

It didn’t take long for any thoughts of a collapse to be put to rest. At the 48th minute Benzema with a shot that hits the post but on the bounce back it hits the goalkeeper and it appears to have crossed the line. It wasn’t clear from the images, but the new goal line technology indicated that the ball had crossed the line. The goal was validated as an own goal from goalkeeper Valladares. France was now sure to take the win and the 3 points on top of the group.

Honduras just dragged themselves on the field for the remaining of the second half, just hoping to hear the final whistle. Before their wish was heard, Benzema jumped on a quick rebound and took a powerful shot that Valladares couldn’t have stopped. This was the final nail in the Honduran coffin, even if the clock said that there were 20 minutes left in the game, the match was over for Honduras.

The game ended with a 3-0 win for France and Benzema is the first French player to score two goals in a World Cup game since Zidane did it in 1998 World Cup. 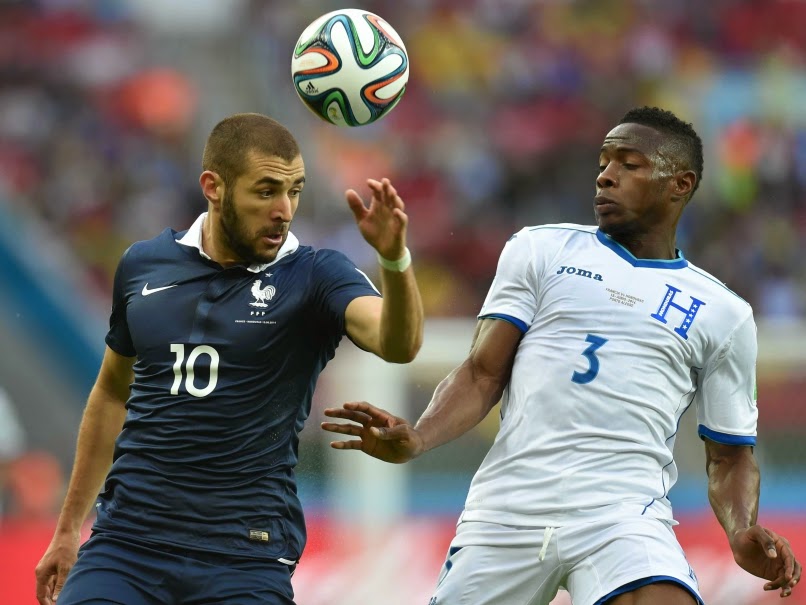 Argentina started the game in the best way possible and on the other hand Bosnia started in the worst way possible. At the 3rd minute of the first half Kolasinac had the ball hit his legs when it was crossed into the box, from an Argentinian free kick, and introduced the ball into his own net. He was very unlucky in that play and right from the start Bosnia was in a difficult position. Starting your first game of the World Cup against Argentina down 1-0 is the worst possible start.
Bosnia reacted well and was able to push forward and created danger near Romero’s net. In the first half I would have to say that Romero was Argentina’s best player. Bosnia wasn’t an offensive juggernaut but they created more chances to score than Argentina and always looked closer to an equalizer than Argentina to extending their lead. At halftime Argentina was holding on to a 1-0 on the own goal and looking very shaky.

The second half brought two changes for Argentina with the addition of Higuain & Gago, but neither of them would make Argentina any more dangerous than what they had been up to that point. Messi had been silent for the first 45 minutes and when most were starting to wonder what had happened to him, Messi decides to open the book and show why he is one of the best players in the world. What a fantastic goal by Messi and finally he shows his talent in this game.

Argentina had a two goal lead but besides the play by Messi they hadn’t done much to deserve this two goal lead. Bosnia never gave up and continued to look for a goal and they would get it in the 85th minute. Ibisevic would score Bosnia’s first World Cup goal ever and ignite this game once again.

Argentina moved the lines back, Aguero came out and that was the signal that they were going to play for this result and hold on to this lead. Messi had one more good chance to increase the score line, but it wasn’t meant to be. The game was over and Argentina wins 2-1. Argentina and Messi were not as impressive as most would hope. Messi had one moment of brilliance and it was enough to give Argentina the lead and win, against a better team in the round of 16 Messi and Argentina will have to play a lot better if they want to advance. 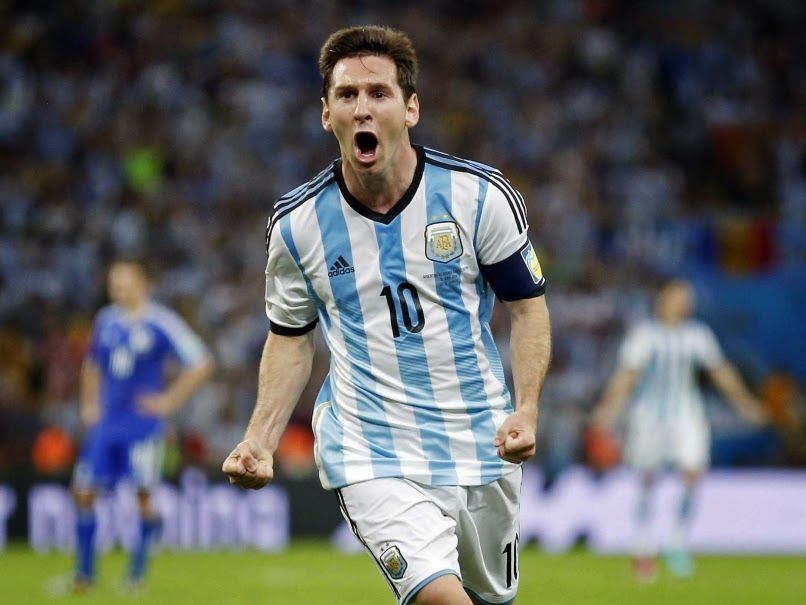