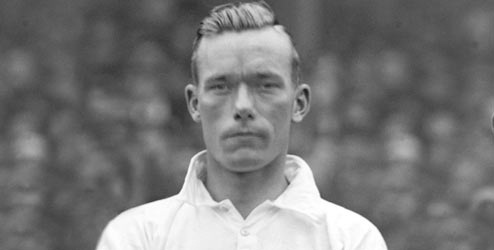 Three seasons ago James Vardy was plying his trade in non-league football for Fleetwood Town. This weekend the Leicester striker, who has found the net in nine straight matches, has a chance to go one step closer to the all time record for scoring in consecutive matches.


Although the record for scoring in Premier League matches is ten, a record set by Manchester United's former ace Ruud Van Nistelrooy in 2003, which Vardy would of course match if he can get on the score-sheet this weekend, the all-time record for scoring in consecutive matches in the top division is 12, which was set decades ago by an Irishman named Jimmy Dunne.

Dunne, a high scoring forward for Sheffield United, was born in Dublin in 1905 and like many of his countrymen started off playing Gaelic football before switching over to the Association game with Shamrock Rovers.

Before his career had started in earnest he spent time in prison in 1923, as he was accused of Republican sympathies by the Irish Free State authorities during the Irish Civil War. The principled Dunne went through a hunger strike while locked up to protest his incarceration.

Returning to Rovers upon his release, he spent two seasons playing for the Hoops before being snapped up by the then English Third Division side New Brighton, where his start of six goals in eight matches quickly caught the attention of bigger fish.

Signing for Sheffield United in 1926, Dunne took a few seasons to settle before hitting stride in the 1929-1930 season as he topped the Division One scoring charts with 36 goals. He followed that up a season later with 41 goals in the league and a staggering 50 goals in all competitions. This mark still stands as the record number of goals a player from Ireland has scored in a season. 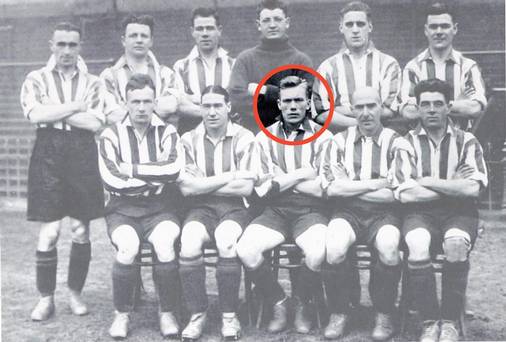 In all he scored an astounding 18 goals over those 12 matches on his way to ending the season with 33 goals in the league.

His record of scoring 30 or more goals in three straight seasons stood until it was matched by Alan Shearer with Blackburn Rovers from 1993-1994 to 1995-1996.

At international level, Dunne represented both the Northern Ireland based IFA side and the Irish Free State FAI side over his career. As prolific internationally as he was at club level, Dunne scored four goals in seven matches for the IFA and 13 goals in 15 appearances for the FAI.

A committed socialist, Dunne marked his last appearance for Ireland in 1939 with a bit of controversy when he refused the FAI's request to salute opponent Germany's leader Adolf Hitler. Dunne kept his arms crossed in defiance as his teammates followed the associations request with the notorious salute.

Back at club level, Dunne was transferred to Arsenal in September 1933, the last major signing of the legendary Herbert Chapman, but despite helping the Gunners to a league title in his first season he never really got going in North London.

After a season with Southampton, Dunne finished up his career with a return to Shamrock Rovers before sadly passing away suddenly at age 44 in 1949.

So this coming weekend, if Vardy scores and is lauded for equaling Van Nistelrooy's consecutive matches scoring mark, remember that he still has two matches to go before he gets to the real record.
SHARE SHARE SHARE