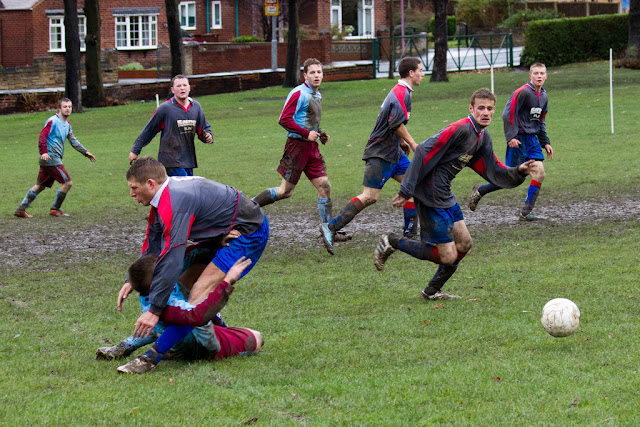 We rarely pull information from Reddit, but some posts are just too hard to ignore. Today we feature our favorite user responses to a simple question...What is your funniest sunday league memory?

"The best thing I have ever seen is someone trying to do a scissor kick, missed the ball completely, landed on his side and broke 3 ribs."

"Had a guy in my team who had the worst stamina and it didn't help that he always was ridiculously hung over. Anyway, he arrives like an hour late. Gets subbed on, runs art full speed towards the guy with the ball, slips and accidentally makes the worst slide tackle ever. It's really bad so he is lucky to only get a yellow. He then runs back to the bench and throws up. All in the span of one minute."

"We had a player who was suspended and played under his brother's name. He got booked, and the ref asked him if his name was Stuart with a U or an E. He didn't know."
"This season a few of our players had been competing for the top scorer award, and it was early days but a couple of them had 4 or 5 goals already. We were about 5-0 up in the cup against a team from the division below and our centre mid (on two goals for the day) got the ball on the half way line, turned and pulled his leg back to shoot. Our centre back (who was leading by virtue of taking our penalties) realised and screamed 'FUCK OFF PAUL'. I'm not sure if he was hoping he'd decide not to shoot or if it'd put him off, but the centre mid let fly anyway, and the shot dipped and hit the bar with the keeper stranded. Only time I've seen a player on my team celebrate a teammate not score. Paul turned to our manager and said 'if that'd gone in I'd have gone straight to the pub' then shouted to their goalie 'and I'd have taken you with me!'"

"I was in goal. The ball came bouncing towards me and there weren't really anyone there close enough to get a foot on the ball. Nonetheless I decided to kick it out and up the pitch, but instead the ball bounced badly off my foot, went backwards towards the goal, hit the crossbar and down on the line. In a stressed rush I tried to kick it out and as far as I could... once again my luck strikes as at the end of my kick my shoe flies off up the pitch, the ball thunders back into the crossbar and back on the line. Standing there with one shoe on I try one last time to kick the ball away and as I try the ball hits my foot wrong and goes straight into my own goal."

"We turned up for a game one Sunday and the other team only had 6 players. So we lent them one of our slower, fatter guys to make a stab at the game. At half time we were 2-0 up and playing silly football. We then proceeded to get 2 red cards, concede a poor goal and then, to top it off, our fat slow loanee managed to lob our keeper from the half way line to tie the game. Fortunately we got an automatic 3-0 win anyway, but the capitulation was still impressive."

"We were playing against an average team but their manager was absolutely mental. All throughout the game he was shouting at his players non stop. Later on in the game at 2-0 to us their team got a penalty and it was probably the worst penalty I had ever seen it was a weak effort straight down the middle and I saved it easily anyway their manager reacted to this by diving onto the pitch, later on into the game and lots of managerial antics later they had a goal disallowed for offside. Their manager was black and at this point he shouted at the ref saying 'WHAT DO I HAVE TO DO TO GET A DECISION REF? PUT FLOUR ON MY FACE?'"
"Playing against the worst team in the league and at half time we were winning 13-0 and they had one player clearly better than the others, anyway the manager was giving the team talk and said that the keeper had done really well to try to make him feel better and their best player turned around and said "FUCK OFF! He's conceded 13 I could do better than that useless bastard." The manager then shouted at him and forced him to go in net the next half. The game finished 22-0."
SHARE SHARE SHARE