Hammer for a Day: The Unlikely Story of Steve Davies 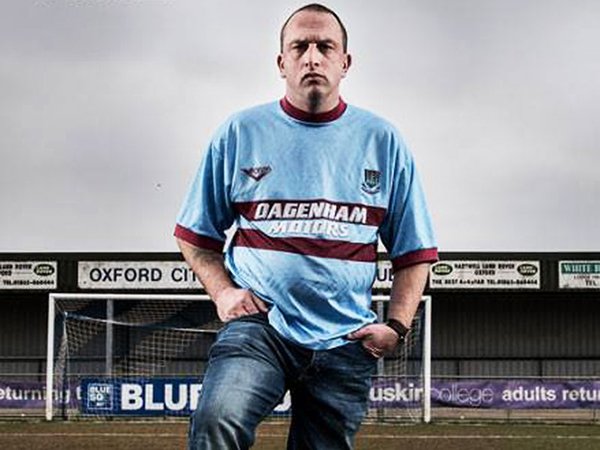 From the first time we entered a football ground, cast a gaze across the lush green pitch and watched our heroes knock a ball around, all of us wanted to be out there with them.

But as we grew up and the reality that we aren't good enough to play the sport we loved, for money at least, we gave up on that dream and moved on to other outlandish very adult dreams like inheriting a vast fortune from a rich aunt we never knew we had.

In 1994, for 45 minutes, lifelong West Ham United fan Steve Davies got to live out the dream of stepping on the field with his beloved club though, but only he did it as an adult plucked from the crowd and one that had downed four beers, a pie and a few cigarettes before the match.

Davies, who had played a bit of Sunday league football in Milton Keynes but not to any great standard, fell in love with West Ham as a kid, idolized Trevor Brooking and had spent the often fraught 1980's of Margaret Thatcher's Britain going up and down the country following the Hammers. It would be at an away fixture that his urban legend would be born.

In 1992/1993 West Ham were promoted to the Premier League after finishing as runners up in Division One. It was a brave new era for English football, as the Taylor Report had come into effect causing clubs to move into all-seater stadia and the money from Sky Sports had started to come into the game allowing for clubs to bring in players from Europe and beyond.

After West Ham's first season back in the top flight on 27 July 1994 they played away at non-league Oxford City, and Davies with his mate "Chunk" in tow drove out to see them in action in this pre-season friendly.

In the tiny Court Place Farm Stadium, the two fans positioned themselves fairly close to then Hammers manager Harry Redknapp on the touch line and even exchanged pleasantries with 'Arry before kickoff.

Once the match got under way however, Davies found himself screaming at West Ham's struggling forward Lee Chapman, who continued to lose aerial duels with a player much smaller than himself.

"Come on, you donkey, Chapman, you're useless!" he shouted at the striker. "Get up!"

Chapman would continue to feel Davies wrath for the rest of the half.

Fate would then step in and actually allow Davies to show whether or not he could do better than the former Leeds striker.

Years later, on an television variety show, Redknapp would reminisce about what happened next:

"At half-time I made five substitutions, and we only had the bare 11 out – I was running out of players. Then we got another injury, so I said to this guy in the crowd, 'Oi, can you play as good as you talk?'"

The 'guy in the crowd' was Davies and he was coming out of the stands to replace Chapman. 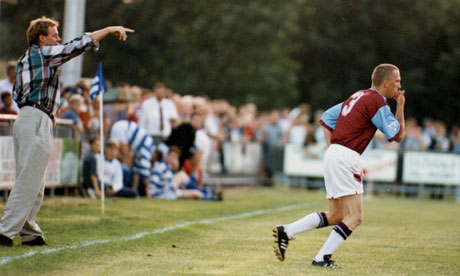 Redknapp had his assistant sort Davies out with boots and a kit, then sent him out with the side for the second half.

As the teams came out for the second half the Stadium Announcer sent an assistant down to get the name of this new signing so he could announce it to the crowd. Redknapp later remarked, "I asked the guy, you been watching the World Cup? It's the great Bulgarian: Tittyshev."

As for Davies, who led the line upfront, he struggled to get to grips with the power and pace of the play and would later quip, "It was fucking quick football. This was a step up from Sunday league, to say the least."
But as much as the man who was living the dream struggled, he continued to make runs and in the 71st minute a cross from Matt Holmes on the wing found Davies running between two defenders and into the box. 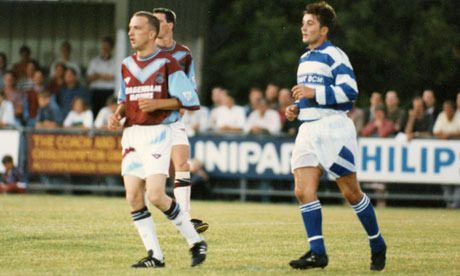 Davies later recalled hitting the ball as hard as he could, past the Oxford keeper and into the bottom corner of the goal. With that he had lived the dream of millions of fans around the world of scoring for their club.

After the match Davies was told he had to give back his boots and the kit, but he managed to sneak away with his jersey at least and a memory that will last him a lifetime.
SHARE SHARE SHARE