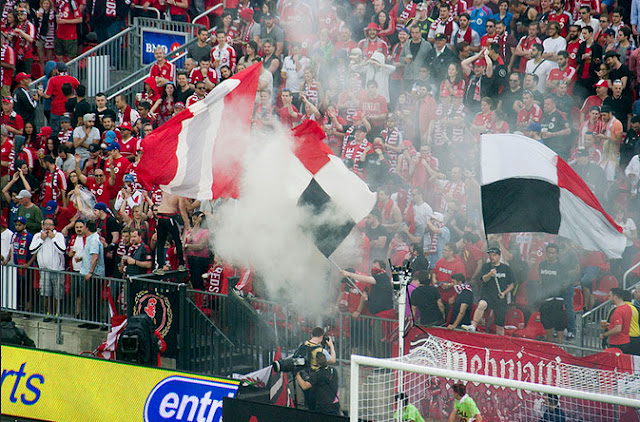 This past Saturday I took up a spot, for the first time this season, in section 114 at BMO Field with my brother, father and a large group of friends with Toronto FC supporters group Inebriatti.


The support in the stands as our local side took down the Philadelphia Union was terrific, reminiscent of some of the great nights we had in the first three or four years of supporting the club before things went sour for a variety of reasons.

As I made my way home on the GO Train later that night, still buzzing from the fun we'd had in the stands and from seeing TFC turn in a great display, I jumped on Twitter to read a recap of the match.

Before I got as far as a match report to my surprise I found that not everyone in the South End had shared my views on the way the day unfolded though.

Duane Rollins, Managing Editor of the Canadian Soccer News and a fairly well known TFC supporter, reported that there had been several complaints from fans at the top of section 114 and 115 who were annoyed at the flags being waved by supporters during the match.

It's important to note that it wasn't Rollins making the complaints himself, but rather noting that other "people were angry" and the club should address it because "punches will get thrown."

This threw me for a loop as I assumed that, by what is in fact the ninth season of the club's existence, someone taking up a spot in the South End at BMO Field would understand that they're in a supporters section and what that means.

In my apparent ignorance I believed that BMO Field's South End denizens would know that besides fans standing for the duration of the match, flags and other displays may obscure some of their view.

In fact, the club itself has helpfully posted on their website the following description of the sections in question:

"For all Toronto FC matches, sections 111 through 119, as well as the top half of section 110 and part of section 127 are considered Supporters Sections. Fans in these sections will be permitted to stand during play and are encouraged to cheer and use pre-approved banners, flags and drums. Please note that the view from these seats may be obstructed and that all banners, flags and drums must be approved in advance of gameday by the Toronto FC front office." 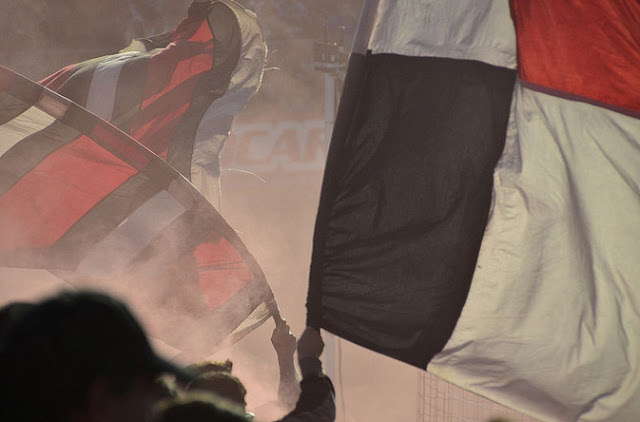 There are also signs in these particular sections that state something to the same effect.

So what is the problem?

Do those complaining not want to be in a supporters section where the reality of drums, flags and displays are very much a reality, or do they want a supporters section on their terms where a group like Inebriatti can entertain them with their passion, but not do anything to block a second of the action?

Or are they in the section because of the cheaper price point these seats are sold at?

I'm not trying to belittle those with complaints, because I respect the fact that we all like to watch and experience football in our own ways, but if having supporter's groups waving flags and hoisting up displays angers you, perhaps you don't appreciate what it is they're trying to do and should look to move into a different section.

Some might argue that they have been in the section since day one and Inebriatti is somewhat of a newcomer to 114 having been established for just a few years, which I can certainly understand. But again the South End has been designated a supporters section since day one and this group isn't breaking any of the rules the club laid out for areas in the ground like this.

Hopefully a compromise can be reached, because from my humble opinion it's great to see what they and the other supporters groups have been doing this season.

For the record I'm not a member of Inebriatti, but I do have friends that are. I think they and the other supporters groups put a lot of time, effort, and money into supporting the club. The passion they help stir up in the crowd is part of the match day experience and I actually believe this does help the team.

Toronto, as a city, has gotten a lot of flack in recent weeks for our capacity to complain about everything. Complaining about how people are supporting in a supporters section seems to be another example of that.

It would be interesting to know what is happening in other grounds around the league in regards to flags and what some of the folks affected at BMO feel about this issue. Comments below are welcomed and appreciated.
SHARE SHARE SHARE