The Round Table: The Ups and Downs of Supporting Toronto FC 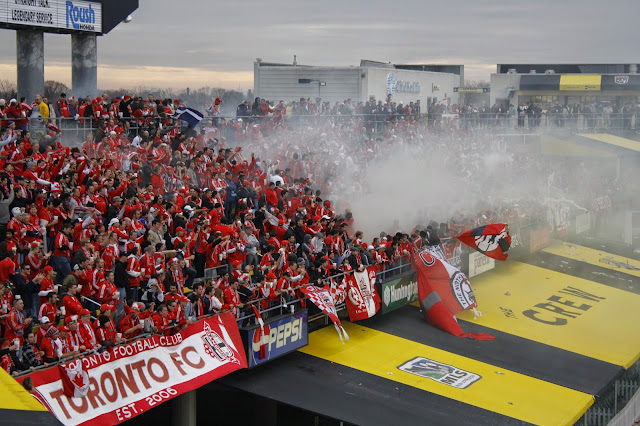 Today the group discussed their own highlights and lowlights of following Toronto FC for nine years.

With Toronto FC's home opener finally taking place this weekend, what are your personal highlights and lowlights of following our local club?

Highlights: The first Toronto FC match ever at BMO Field against Kansas City in 2007. Although we lost 1-0, the atmosphere that day was brilliant and I really got a sense that football was going to "work" in Toronto. Danny Dichio's goal in the next match against Chicago, the club's first ever in a 3-1 win was also a brilliant moment. Other highlights include getting past LA Galaxy in the 2012 Champions League and of course the "Miracle in Montreal" in the same competition a few years before. My first roadtrip, Columbus away in 2009 when we took around 2,500 fans down there is probably my favourite day following the club. The tailgate was amazing, the last gasp equalizer was great, the banners were top notch, and I made friends that weekend that may last a lifetime. It was wonderful.

Lowlights: All of the losing. The club raising prices for the first five years despite the horrific play on the pitch and the cynical way management treated fans. Mo Johnston getting four years, when he shouldn't have been hired in the first place. The management merry go round, the rotating squads of players and all of the other instability.

Parmar:
Highlights:
The so called massacre in Montreal when we won the Voyageurs Cup. It was a fun night in the rain then afterwards getting Carl Robinson's jersey was sweet.

Road trips were cool, got to see some cool cities in 'Merica that I probably wouldn't have without TFC being around.

Making new friends. As a result of TFC I have made some really cool friendships.

The rest are all lowlights. Everything from the losing to the mismanagement of the club is just outright embarrassing.

Personal highlights for me were any "Black and White Express" trips I did. Including DC and Chicago, driving straight there and back basically, with Deniz and his dad (Laughs his ass off). Seriously some of the best times were had on the road.

The best for me was probably going to New England with a bunch of USector and Red Patch Boys, realizing this thing was for real.

My girlfriend Alyson would like to mention that her favourite highlight, was the first road trip for her at New England. Tailgate busting. Some dude Jumping and singing... His keys go up over his head.... And then right down a sewer drain.

Iain:
One of our crew lost his passport coming back from Chicago and had a real hassle at the border. We've never let him forget that. (Laughs)

Bramble:
Highlights:
The Champions League run in 2012 vs LAG at Skydome was probably the "closest" to a European feel I've experienced in MLS. It was just missing flares smoke and such, and the follow up win away was amazing as i didn't' think they'd pull it off. Shame the rest of the tourney was rigged.


I could've gone on more roadtrips, but I didn't wanna get on the buses with weirdos.

Luka:
That's my banner beside the Pepsi logo in the picture above, think that's me with the long hair over it as well. Some asshole stole it at Skydome when we had that home opener there.

Highlights: I have many. First home match vs. KC. Atmosphere was great, and I had a smile from ear to ear the entire match. Everyone in my section was stomping the stands like crazy because they were reverberating and making so much noise. They had to tighten all the bolts before the next home match which was fantastic in its own right. First win, first goals and the first of lengthy stoppages caused by fans raining seat cushions (who thought this was a good idea?) onto the field by the hundreds. Don't think I've ever had more fun throwing anything in my life.

Hawk:
My highlights. In my opinion TFC's most memorable victory. 2-1 over Cruz Azul. I remember everything about that game. Just an amazing evening.

Also the final game vs Vancouver in the NCC. Where it was the bleeding splish splash show.

I would say those two games were the most fun I had.

Oh also being told by Rogers Center security to tell my section not to throw stuff at Beckham.

Also meeting you guys and stuff.

Juan:
You've mentioned most of them already but here's my short list:

Parmar:
Yup "whose got the bigger dink" contest among all the supporters groups has ruined the experience for me in the Southend for sure. I can't stand being there to be honest.

Oh and Iain, thanks for making me fucking angry first thing in morning because of having to dig up bad losing memories (Laughs).
SHARE SHARE SHARE