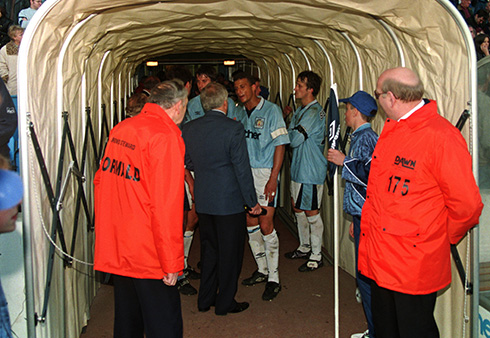 This Sunday the English Premier League will enter its last day of competition for the 2014-15 season, but while the title has already been captured by Chelsea with three matches to spare there are still a few scenarios that need to be played out and as is the case on many a last day, they may unravel in incredible, odd or unlikely fashion.


Liverpool, Tottenham and Southampton are all competing for the various stages of Europa League and one of the three will miss European action altogether. And at the bottom end of the table there is still the matter of relegation being battled out between Hull City and Newcastle United. Hull for instance would need to defeat Manchester United and have Newcastle lose to West Ham if they were to remain in the top tier, but as you will see in the list of historic events below, in football nothing is impossible.

Final day of the 1995-96 season saw 5 clubs hoping they would not be the one to fall into the last relegation spot. With Bolton and QPR having already secured their drop to the second tier, Manchester City, Southampton, Wimbledon, Sheffield Wednesday and Coventry City were all in danger of relegation if their rivals were to get results. City went 2-0 down in their match against Liverpool and their fans were already preparing for the drop. After an impressive comeback however, and with the score tied at 2-2, manager Alan Ball advised his squad to hold on to the draw at any cause as Southampton were losing in their respective match. But as City achieved the desired tie result it was discovered that Ball was misinformed as Southampton were actually drawing their match 1-1 and Manchester City got relegated as a result.

Sitting 1 point behind Manchester United on the last day of competition Arsenal's title faith was in the hands of a very unlikely ally. As the Gunners prepared to take on Aston Villa it was their bitter London rivals Tottenham that would play United. Scenes never seen before were unveiling in front of football fans' eyes as Arsenal supporters around Highbury stadium were watching their club play and at the same time listening in on the results of the other match, desperately hoping for their derby rivals to get a result against The Red Devils. Tottenham would take a 1-0 lead against United and Arsenal would go on to win their own match 1-0. But it wasn't to be for the Gunners as the Spurs gave up two goals with United securing the title.

Sitting dead last, West Bromwich Albion were having a nightmare of a season and what seemed as an extremely unlikely bid for survival heading into the last day of competition. With 31 points, West Brom needed favorable results from three clubs directly above them. Southampton and Crystal Palace were both a point ahead of the Baggies and were facing Manchester United and Charlton Athletic respectively, while Norwich were away at Craven Cottage facing Fulham. Fulham provided West Brom with a one sided 6-0 thrashing of the Canaries while Manchester United won 2-1 against The Saints. Palace however, were looking to remain in the top division and after going 1-0 down in their match against Charlton, they managed to equalize and then take a 2-1 lead in the 70th minute. Although West Brom enjoyed a 2-0 lead of their own in their match against Portsmouth it would not have been enough if it wasn't for the 82nd minute goal of Charlton defender Jonathan Fortune against Crystal Palace. The 2-2 draw at The Valley propelled WBA from 20th to 17th, jumping over three clubs to safety and avoiding relegation at the expense of Southampton, Norwich and unlucky Crystal Palace. 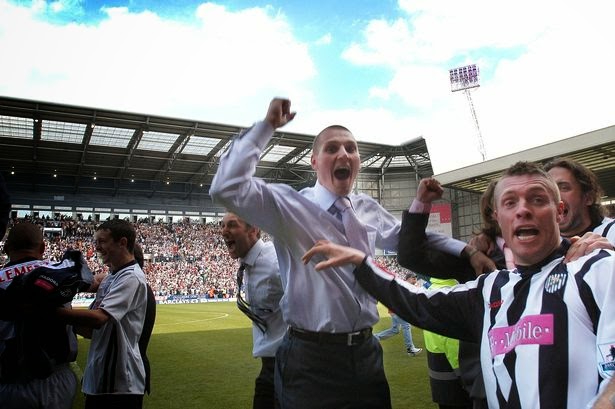 Enjoying a 1 point table lead ahead of bitter rivals Arsenal, fourth place Tottenham were not only looking to claim the last UEFA Champions League spot away from the Gunners, but were also looking forward to finishing ahead of their hated rivals for the first time in 11 years. A meeting with middle of the table West Ham United seemed as a fairly easy task to overcome for the Spurs, but the night before the big match against West Ham 10 star players for Tottenham got violently ill after eating a Lasagna at the Marriott Hotel at Canary Wharf. Unable to postpone the last day match Tottenham fell 2-1 to West Ham, while Arsenal's win against Wigan put them into 4th place and secured the last UEFA Champions League spot for The Gunners.

Even the youngest football fans will remember this miraculous last day in the Premier League at the conclusion of the 2011-12 season. Having won their last league title in 1968 Manchester City headed into last day even on points with rivals Manchester United at the top of the table. An 8 goal superior goal differential however, meant that City would basically need to duplicate or better the result of United and they would lift the English top tier trophy for the first time in 44 years. With United playing away at Sunderland, City were at home, facing relegation battle side QPR who had only managed 11 points on the road all year.
With the two matches going almost at identical times it started well for both Manchester sides. United took the lead in the North East thanks to a Rooney goal in the 20th minute, while City went ahead thanks to defender Pablo Zabaleta. At Sunderland the match went on fairly uneventfully, with United controlling the pace and Sunderland not threatening enough to take The Red Devils out of contention. But at the Etihad last day drama would be at its finest on the day. Visitors QPR first leveled the score early in the second half via Djibril Cissé and then astonishingly took a 2-1 lead thanks to a goal by Jamie Mackie despite the earlier sending off of midfielder Joey Barton for an elbow on City's Argentine striker Carlos Tevez.
As the match went on, City were looking to be running out of ideas and surely running out of time as they were unable to even the score as the stadium clock showed 90 minutes. Due mostly to time wasted during the episode with Joey Barton, 5 minutes were added to the injury time; five minutes that would change Manchester City's history for ever. In the second minute of added-time Edin Dzeko tied the game up and just two minutes later the faith of Manchester was sealed as Sergio Aguero put the ball in the back of the net for the 3-2 win and City's first title in nearly half a century.
As if this was not incredible enough, Queens Park Rangers footballers would also celebrate after having found out that Stoke City managed a late equalizer which would send Bolton down instead. 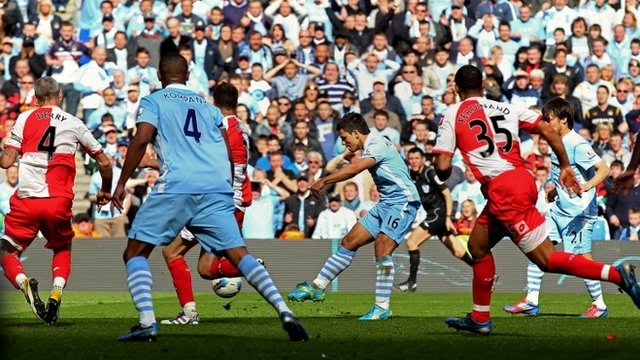