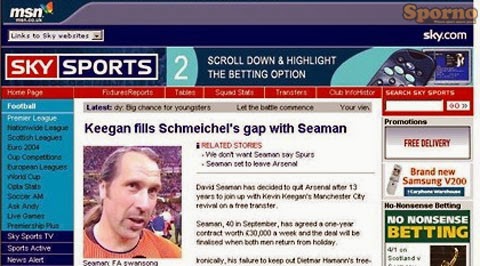 Headline writing is sometimes like an art, you can engage readers by creatively putting together a few short words. On other occasions a headline can unintentionally become funny, sometimes in an appropriate way and other times in a manner that gets the writers fired from their job. Here are the 5 funniest headlines from the world of football.

This was an online football magazine's headline which covered the story of Czech Chelsea goalkeeper Peter Cech signing a new contract.

Geez, I remember when I saw this one for the first time I just couldn't stop laughing. Surely this one was done on purpose and if not, then the coincidence is incredible. In 2008 Champions League play Italian club Juventus who are nicknamed the "Old Lady" were unable to beat Belarussian minnows FC BATE Borisov. Goal.com came up with this neat headline.


"Fucks off to Benfica"

Although this one may seem pretty inappropriate, before you wonder why we didn't censor the word "Fucks" let us explain. See, Argel Fucks was a Brazilian footballer playing for Palmeiras. When he was sold to Portuguese side Benfica, "Fucks off to Benfica" seemed like a pretty appropriate headline.

This was the way Sky Sports reported Kevin Keegan signing goalkeeper David Seaman after the departure of Peter Schmeichel. The headline didn't stay up for too long as it was removed by Sky Sports shortly after realizing how this particular combination of words and names really sounds.
SHARE SHARE SHARE