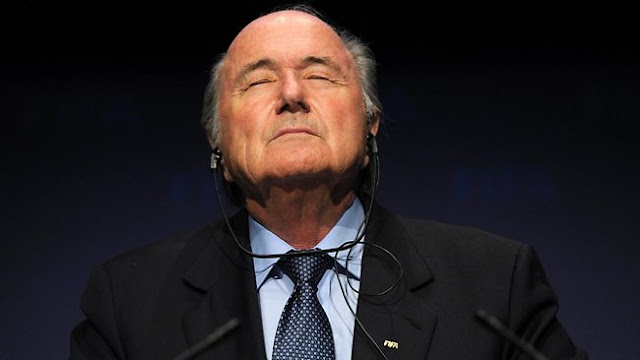 Despite Wednesday's stunning arrests of several FIFA Executives, Sepp Blatter predictably absolved himself of responsibility in the alleged rampant financial wrongdoings and pledged to clean up football's governing body.
As the majority of the world that's not getting, alleged, backhanders from FIFA rolled their eyes, Blatter continued on with ramblings about football only having only a few bad eggs and his eyes can't be everywhere.

Although his speech consisted of his typical of brand of farcical noble waxings, it didn't quite measure up to some of his more outlandish or offensive quotes of the past.

Here are a few beauties from Mr. Blatter:

Blatter on three women joining the board at FIFA's congress in Mauritius:
"We now have three ladies on the board. Say something, ladies. You are always speaking at home, say something now."

Blatter on women's football:
"Let the women play in more feminine clothes like they do in volleyball. They could, for example, have tighter shorts."

Blatter on gay fans hoping to attend the World Cup in Qatar:
"I'd say they [gay fans] should refrain from any sexual activities."

Blatter on racism:
"There is no racism, there is maybe one of the players towards the other, he has a word or a gesture which is not the correct one, but also the one who is affected by that, he should say it's a game, we are in a game. At the end of the game, we shake hands, this can happen, because we have worked so hard against racism and discrimination."

Blatter on Cristiano Ronaldo's desire to leave Manchester United for Real Madrid in 2009:
"I think in football there's too much modern slavery in transferring players or buying players here and there, and putting them somewhere."