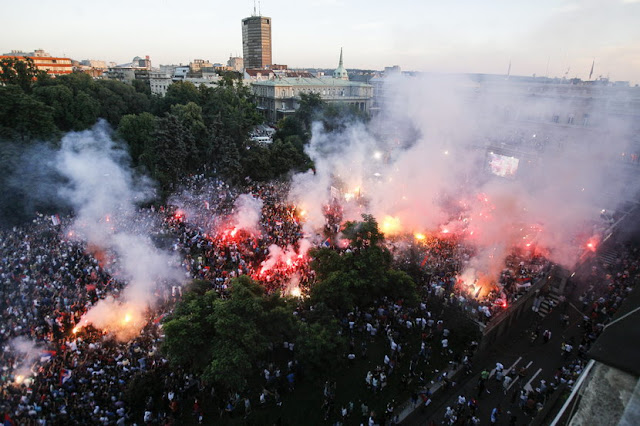 Serbian football fans welcomed back their U20 squad after the youngsters managed to win the country's first U20 World Cup title (as an independent country), a tournament which was hosted this year in New Zealand.

After losing to Uruguay in the first match of the tournament, the Serbian team would win the rest of their games on route to win the top prize. On Saturday they faced five time champions Brazil in the final match of the tournament at the North Harbour Stadium in Auckland. Although extra-time was needed the Serbs came out 2-1 victorious.

On their return home, they were greeted by approximately 50,000 fans who were crammed in front of Belgrade's city hall. The fans were singing, dancing, chanting and as is the case on most football occasions in the country pyro was present as well.

Some supporters showed banners such as "There is Hope", referring to Serbia's senior team's poor performance at the 2016 Euro qualifying matches.

As part of Yugoslavia, the country won the 6th edition of this very tournament hosted in Chile in 1987.