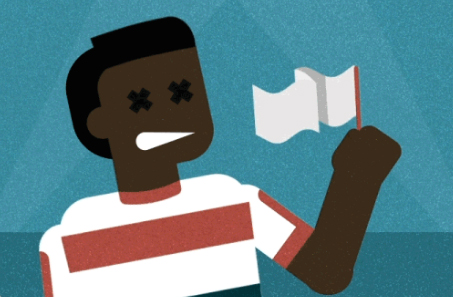 Italian motion designer Emanuele Colombo created a unique project for ESPN, animating illustrations to reflect the best moments of the 2014-15 UEFA Champions League tournament. The result was both artistically impressive and funny. You can follow Emanuele on Twitter @ema_colombo

Here is the project, including the animations and the description in Emanuele's own words:

"In March 2015 ESPN's creative director Neil Jamieson asked me to create a bunch of .gifs to illustrate some of the greatest moments of Champions League 2015.

Here they are, with their related articles.

You can see the complete project at this link: click here

It's rare these days for Lionel Messi to do something that takes our breath away. Not because he's losing his touch (far from it), but because everything he does is so stunning that it's hard to keep being amazed.


Then there was Barca's 3-0 win over Bayern Munich in their semifinal, first leg. With just 13 minutes left, it appeared that Pep Guardiola might escape his former Camp Nou home with a 0-0 draw. Then Messi scored a simple goal to break the tension -- 1-0 Barca -- but it was his second goal that truly dazzled.


It was pure playground football: advancing at poor Jerome Boateng near the edge of the box, a quick shimmy put the Argentine clean on goal. All Boateng could do was fall down and watch what happened next. Messi impudently chipped the world's best goalkeeper, Manuel Neuer, on his weaker right foot. 2-0 Barca. Neymar would add an even later third to put things beyond doubt.

Whether it's a new tattoo, an outrageous goal or an unprintable remark, Zlatan Ibrahimovic is the straw that stirs football's drink. So when PSG met Chelsea in the round of 16, a late Ibra tackle earned him a red card, but not before Chelsea surrounded poor ref Bjorn Kuipers and begged him to dismiss the dangerous Swede. (He later famously referred to the Blues as "babies.")

Though the Blues got their wish as Zlatan enjoyed an early shower, his PSG teammates got the last laugh with a dramatic extra-time win. It's not the first time John Terry has cried in the Champions League, either...

Pep Guardiola and Bayern Munich almost feels like an unfair partnership, like the Avengers writ large on the footballing world. Their progress through to the Champions League final seemed almost preordained until they ran aground at Porto in the quarterfinal first leg. Julen Lopetegui's team seized on a slew of uncharacteristic Bayern errors to take a 3-1 lead back to Munich for the decisive game. Could they hold on?

Of course not. It took Bayern just 27 minutes to erase the deficit with goals from Thiago, Jerome Boateng and Robert Lewandowski to prove that a Bavarian "crisis" was pure myth. Thomas Muller and Lewandowski added additional goals for a 5-0 half-time lead en route to a 6-1 final score and 7-4 aggregate win.

One of the most enjoyable things in football is the competition between Lionel Messi and Cristiano Ronaldo for all the game's individual scoring records. They played a game of Champions League chicken this season, with each man approaching and then accelerating beyond the great Raul, who notched 550 games for Real Madrid over a glittering 18-year career at the Bernabeu.

The pair are level on 77 goals apiece but Messi still has the final to play in Berlin.

Dimitar Berbatov is so laid-back you'd be forgiven for thinking he was asleep, such is the languid elegance with which he plays the game. When Monaco traveled to Arsenal for their round of 16 first leg, few gave the Ligue 1 side a chance of a positive result.

Tsk, tsk -- they all forgot about the smooth Bulgarian, whose casual finish helped Monaco to a 3-1 win and led to the Gunners' demise.

Executing a perfect nutmeg in football is the ultimate art of humiliation, a clear sign that says "I am better than you and here's why."

Cue Barcelona's trip to PSG for their quarterfinal first leg. You couldn't help but feel bad for Laurent Blanc's side, specifically David Luiz. Brought on unexpectedly after 21 minutes to replace the injured (again) Thiago Silva, he tried gallantly to contain Barca's three-pronged attack but had no answer to Luis Suarez.

With the tie delicately poised at 1-0 with just over 20 minutes to play, Suarez executed the first of two perfect nutmegs on the beleaguered Luiz, each of them resulting in goals that would end up a comprehensive 3-1 win for Luis Enrique and co. Game over, all thanks to Suarez.
SHARE SHARE SHARE