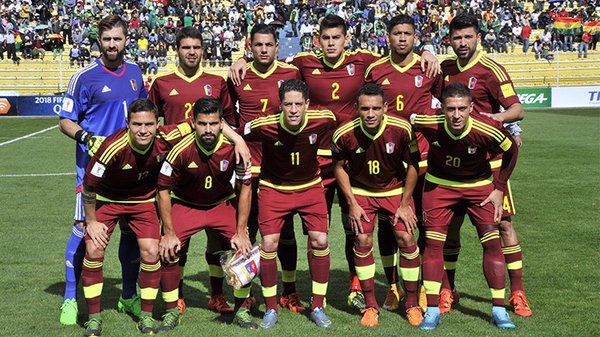 Still the only CONMEBOL region nation that has never managed to qualify for a FIFA World Cup, it seems that Venezuela's luck won't necessarily be turning around for the 2018 tournament in Russia. After a poor start to the current qualifying campaign which sees them dead last in the South American group with no points from four matches, the national team players have announced that they are not willing to play out the campaign unless the entire coaching staff and the Venezuelan Football Federation directors were replaced.


Having lost seven of their last eight matches in all competitions (with just one draw), VFF director Laureano Gonzalez accused the squad of conspiring to have national team coach Noel Sanvicente fired by performing poorly. But the players took exception to the comments made by Gonzalez, saying that  "[those] declarations are totally false and defamatory of our honor and reputation," in a joint statement.
Following the accusations however, the players became adamant that they can no longer play in an  "environment already damaged by our directors."
A baseball nation, Venezuela has seen vast improvements in their football program in recent years. With the emergence of such stars as Genoa's (formally with Hamburger SV) and current national team captain Tomás Rincon and West Bromwich Albion's Salomón Rondón, the future of Venezuelan football was looking better than ever. Recent retirements of key figures such as defender Fernando Amorebieta and the team's all-time top scorer Juan Arango however, have slowed the results down, at which point the director of the VFF decided to make his accusations.
This is bound to be yet another blow to the hopes of La Vinotinto's faithful fans of seeing their nation play on the biggest stage of world football for the very first time.
SHARE SHARE SHARE