Andres D'Alessandro Just Got His Own Face Tattooed on his Belly Tattoos, unless you go in for expensive laser removal surgery, are generally for life. So it's a good idea to make sure that the tattoo you end up with isn't a shit one.


This week Internacional midfielder Andres D'Alessandro may have opted for the crappiest and most self indulgent tattoo of all time when he paid to get an image of his own face tattooed on his stomach.

The player, who had shown such incredible form in the early part of his career that he drew comparisons with a young Diego Maradona, has had a nomadic career with stops at River Plate, Wolfsburg, Portsmouth, Zaragoza and San Lorenzo while never fulfilling his early promise.

Despite how his career has unfolded in the eyes of the world though, one person who must certainly hold the former Argentinian international in high regard is D'Alessandro himself if the ink is anything to go by. 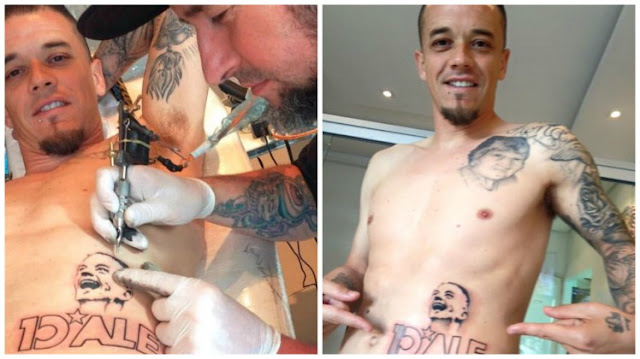 At least when he hits old age he can point to his gut and tell people at the nursing home that's what he used to look like, while the rest of the old timers around him shake their head and mutter something about him being a prick.
SHARE SHARE SHARE