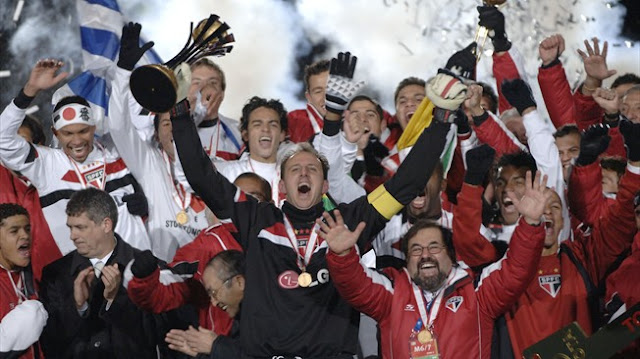 After a series of false starts, and despite a lot of cynicism in some quarters, the FIFA Club World Cup kicked off in it's current form ten years ago this week in Japan.

The tournament that year was made up of six teams, one from each of the FIFA confederations that hold champions cup tournaments. The participants included the champions of Africa (Egypt's Al-Ahly), Asia (Saudi Arabia's Al-Ittihad), North, Central America and the Caribbean (Costa Rica's Saprissa), Oceania (Sydney FC), Europe (Liverpool), and South America (Brazil's São Paulo).

With the previous incarnation of the tournament, that took place in Brazil in 2000, being a bit of a convoluted mess that was stretched out over a group stage and knockout rounds, the feeling was that FIFA simply had to get it right this time around.

The tournament in 2000, which featured two teams from Europe (Real Madrid and Manchester United) and two South American teams (Corinthians and Vasco da Gama) to go along with qualifiers from the other confederations, necessitated an excessive number of matches packed into an already busy football calendar and this had the European sides in particular balking at future events like this.

Manchester United, in particular, were unhappy with the conditions of the tournament as they felt railroaded into it by an English Football Association that was trying desperately to land the 2006 World Cup.

United, rather controversially, dropped out of the English FA Cup as a result of their participation in FIFA's event.
It was the first time in the history of the famous old event that a cup holder failed to enter into the tournament to defend their trophy.

To avoid these issues, FIFA organized the revamped Club World Cup so that the four "weaker" federations would enter the tournament in the Quarter-Final Stage with the winners moving on and the losers playing in a fifth place decider.

The Quarter-Final winners would then play the champions of Europe and South America in the Semi-Finals, with the winners moving on and the losers playing in a third place match.

So while club's from the smaller federations could potentially play three tournament matches, the giants of Europe and South America would only ever have to play twice.

Al-Ittihad won the first match of the tournament 1-0 over Egypt's Al-Ahly to earn themselves a Semi-Final match up with São Paulo, while Saprissa edged out Sydney FC by a score of 1-0 as well.

Sydney went home with a consolation 2-1 win over Al-Ahly in the fifth place match.

In the Semi-Finals, as expected, Liverpool romped past Saprissa 3-0, but São Paulo were taken to the wire by a determined Al-Ittihad side and only prevailed 3-2 to make it to the final.

The final, between Champions League holder's Liverpool FC and São Paulo finished 1-0 to the Brazilians, with the only goal scored by defensive midfielder Mineiro.