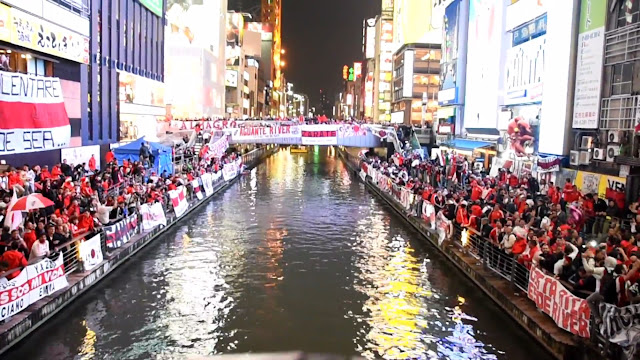 It has been clear for a long time now that the fans of Argentine football club River Plate are some of the most passionate in the world. The Estadio Monumental Antonio Vespucio Liberti (or simply El Monumental) in Buenos Aires is rocking with incredible atmosphere every time River takes to the pitch.


Last night however, River's faithful showed that their home stadium does not set the boundries of their support; not even remotly close in fact. Joining their beloved team at the 2015 FIFA Club World Cup, for some it was as far as a 27 hour flight across the Pacific Ocean, but once there, River Plate's fans took over Osaka's canal district in the lead-up to their semi-final match against Japan's own Sanfrecce Hiroshima.

This awesome footage shows hundreds of River Plate supporters singing in unison on the streets of Japan, making this far away destination into little Buenos Aires for the night.


River's fans would have more reason to celebrate as their club would secure a 1-0 victory in the match and a spot in the tournament's final, which will see them compete for the title of best football club in the world against the winner the other semi-final matchup between Spanish giants Barcelona and China's surprise semi-finalists Guangzhou Evergrande.

And just in case you missed River Plate's 1-0 victory over Sanfrecce Hiroshima, the highlights of the match are below: