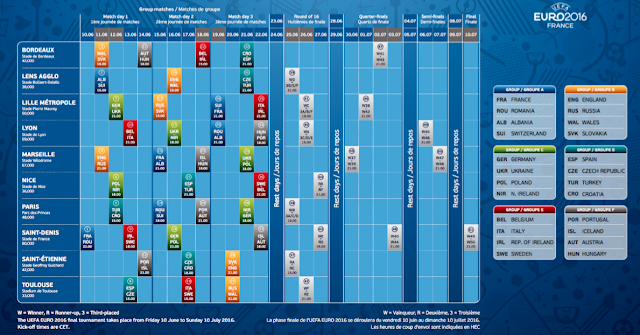 After a little time off, we put our simulator back to work. Having completed the entire group stage, now it's time for the round of 16. To take a more in-depth look at the group stages, click on the groups below:

Surprise runner-ups of Group A, Albania takes on runner-ups of Group C Ukraine. The Ukrainians came out strong and were creating most of the scoring chances throughout the match, utilizing the wings to put pressure on the Albanians, but were unable to score in the first half. In the second, Albania switched things around and seemed the more energized of the two, but against the run of play Ukraine capitalized on yet another scoring chance which started with a run from Sevilla man Yevhen Konoplyanka who was able to feed the ball to a trailing defensive midfielder Taras Stepanenko, whose strong shot from just outside the box found the back of the Albanian net. With the victory, Ukraine will wait for the winner between Spain and Sweden.

Winners of Group B, the Russians take on 3rd placed team from Group A Romania at the Parc des Princes where the Romanians have already played once when they defeated the Swiss. As was the case against Switzerland, Romania's solid defense was on point in the first half with the Russians unable to get through for a decent scoring chance. But on the other side, the Romanians themselves were unable to create anything that would threaten the goal of Russian keeper Igor Akinfeev. The Romanians would get on the board first in the second-half however when 35-year-old full-back Răzvan Raț got on the end of a cross to give his side the one goal lead just two minutes after the restart. Russia would answer in the 72nd, with Artyom Dzyuba scoring his 3rd of the competition. With the match all tied up at 1-1 and with extra 30 minutes of football not resolving a thing, the match went to penalty kicks. Romanian keeper Costel Pantilimon would prove to be the hero on the day, as he managed to save three consecutive shots to hand his side a place in the semi-finals where Romania will face the winner between Belgium and Austria.

With Ukraine confirmed as the next opponent for one of these two, Group D winners Spain take on 3rd place team from Group E, Sweden. With a 1-0 loss to Croatia still fresh in Spain's memory, the defending Euro champion's strike force were again unable to find a level of creativity to put pressure on their opponent's net, as the Swedes were able to stop most of Spain's attacks with ease. Sweden on the other hand, used the counter attack strategy to perfection, with both Kim Källström's goal in the 24th minute and Erik Johansson's first for his country in the 48th coming from such an instant. The defending champions were shut-out for the second consecutive time in the tournament, with Sweden moving on to face Ukraine, while Spain is flying back home.

As far as many were concerned, hosts and winners of Group A France were not only heavy favorites over 3rd place Group D squad Czech Republic, but were also one of the top picks to win the entire competition. So when Les Bleus weren't able to score until the Czechs were already 2-0 up, the football world was indeed stunned as the hosts were shocked for the second time in the tournament after their group stage loss to Albania. The Czechs move on to face the winners of England and Portugal with a goal in each half from Tomáš Necid and Tomáš Rosický, while Anthony Martial's goal in the 71st minute proved to be too late for the French.

Being the only team to win every match in the group stages, Group C winner Germany were held to a surprising scoreless draw until the 88th minute by Group F's 3rd place team Hungary. But the defending champions would move on and eliminate the Hungarians with Bastian Schweinsteiger's match-winning goal just two minutes before the end of regular time. Germany will wait on the winner between Italy and Turkey to find out their opposition in the quarter-finals.

Winners of Group F Austria was facing runner-ups of Group E Belgium in a match that would provide a very entertaining last 10 minutes. When the Belgians took a quick 1-0 lead in the 11th minute with a goal from Manchester United's Marouane Fellain, the Belgian Red Devils stuck in defensively with the Austrians unable to create any real scoring chances for the majority of the match. But in the 81st minute a goal from defender György Garics seemed to have pushed the match into extra-time. The additional 30 minutes would not be required however as Kevin De Bruyne put his side up for good in the 89th minute; eliminating Austria and setting up a quarter-final date with Romania.

Winners of Group E the Azzurri were looking to get back to the Euro finals after losing to Spain the last time around. Their opponents Turkey, who finished 2nd in Group D haven't competed in the Euros since 2008 when they made it all the way to the semi-finals. In a match that was perhaps more entertaining than either side's group stage performances, scoring chances were plenty and the play was quite open with both teams trying to produce more offensive pressure than they have managed in previous matches. The Italians got on the board first in the 20th minute when Stephan El Shaarawy scored his first of the tournament. But Turkey would tie it up in the 38th with a goal from Selçuk İnan. The second half was a bit more conservative from both sides as the two were trying to make sure no more goals were scored against them, but while the Italians managed to do just that, Turkey gave away a few scoring chances, one of which ended up in the back of their net when Ciro Immobile managed to snatch the winner for his side, which will now face defending champions Germany in the next stage.

Runners-up of Groups B and F, England and Portugal have met in knock-out competition before. Most recently the two locked horns in a pre-tournament friendly which England won 1-0. Unlike the friendly match however, the Three Lions could not fall back on a depleted Portuguese team due to Cristiano Ronaldo's absense and a red card to one of Portugal's players, that said, this match was also different in the sense that England actually looked better and more comfortable against their opposition this time around. While controlling the majority of posession early on, Jamie Vardy who had failed to score in the competition so far would prove to be the hero on the day scoring both of England's goals; once in the 20th minute and again in the 60th to give England the strong lead with just half an hour to play in the match. Portugal's Ronaldo did manage to snatch one back in the 76th minute, but his goal proved to be too late as England held on to the 2-1 victory and a meeting with the Czech Republic in the next stage.