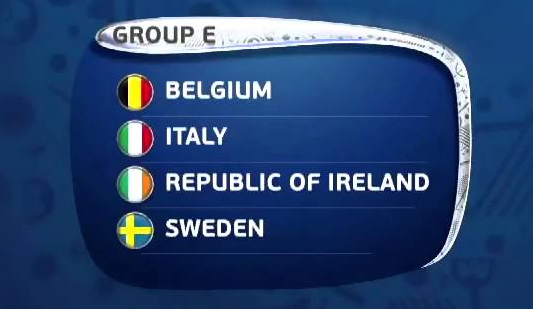 Group E has been given the infamous label of "Group of Death" in this summer's Euro tournament and it's not too hard to see why that is the case. Italy and Belgium are perhaps the two sides most will consider to finish in the top two spots, but Zlatan Ibrahimovic's Sweden is a side always capable of victory against the best of teams and a Republic of Ireland side that has been known to steal some big points in previous major tournaments, this group is not very easy to predict. Let's see how the simulator does...

Kicking-off Group E matches are the Irish and the Swedes in a hard-fought battle in which Erik Hamrén's side controlled the pace nearly the entire time, with the Irish unable to create any real scoring chances on their opponent's goal. The lone goal to separate the sides came in the 37th minute as Sunderland's Sebastian Larsson scored just his 7th goal for Sweden.

In what should have been an entertaining affair, both Belgium and Italy decided to show off their strengths as dominant defensive sides, which created a lot of action in the middle of the park, a few good shot blocks and saves from both Thibaut Courtois and Gianluigi Buffon and of course some strong tackles that resulted in a couple of cautions. Scoring unfortunately was not on the menu on the eve of these sides' first Euro match of 2016.

Looking to catch up to a Sweden side which was the only winning team in Group E's opening matches, the Italians yet again went scoreless in the first half, despite having the better of scoring chances. With Sweden doing little in front of the Italian goal, Zlatan Ibrahimovic's shot that rattled the crossbar of Gigi Buffon was the side's best chance to go ahead in the second half, before the Italians got on board at last when Graziano Pellè and Antonio Candreva scored in the 70th and 89th respectively to give the 1968 Euro champions their first win in the 2016 tournament.

With the Italy/Sweden match having been played the day before, both the Belgians and Irish were not under immense pressure to win their match as both the Swedes and Italians were now sitting with 3 points each. The Republic of Ireland however, found the Belgian defence too strong and mustered just a lone shot on the net in the entire match, as Barcelona's Thomas Vermaelen was the only scorer on the day despite being a defender, handing the Belgians their first win of the tournament.

A win against Italy and a Sweden loss along with favorable goal differential could see Ireland through to the next round and the belief that this could happen was apparent in both the Irish players and fans to start this match. After all, it was Italy who the Irish shocked with a 1-0 win at Giant Stadium during the 1994 FIFA World Cup, although a 2-0 loss at the 2012 Euros was how a much more recent encounter between the two in a major tournament conclude. Nonetheless, the Irish were out to prove something and were up by two goals within 20 minutes of kick-off, with a quick brace from MLS striker Robbie Keane. The Italians managed to pull one back just before the half as Graziano Pellè scored his 2nd of the tournament.

In the second half the pressure from the Italians intencified and the barrage of chances on the Irish net proved to be too difficult to handle as captain John O'Shea accidentaly put the ball in the back of his own net after a few messy clearance tries by the Irish defense. With 9 minutes remaining in the match the Italians would score a third and take their first lead of the match as Pellè was on the scoresheet once more. But the Irish had one last trick up their sleeves and would at least ensure that they would not leave the tournament without a point as Everton's Aiden McGeady would score his first ever goal in a major tournament to cap-off an exhilirating match.

Much to the surprise of many spectators, both sides in this encounter came out strong to start the match, despite the fact that a draw would guarantee both Belgium and Sweden a spot in the next stage of the competition. Nonetheless, with the pace at a much higher level than that seen in the sides' matches leading up to this one, chances on goal were plenty with the keepers doing their best to keep most out. But just minutes before the half-time whistle the Swedish fans got what they have waited for since the start of the tournament when none other than Zlatan Ibrahimovic slotted his first of the tournament to give his side the lead. With more pressure from the "De Rode Duivels" in the second half however, the draw would in fact be the final result as Kevin De Bruyne scored from outside the box to secure his side a point.

None of the sides displayed true domination in any form through the six matches of Group E, but the Italians and Belgians did show some dominanace and defensive quality that could prove crucial in the elimination rounds. Securing top spot with a superior goal differential the Italians will face Turkey in the next round, while Belgium await the winners of the final group (F). Sweden is guaranteed a spot in the quarter-final with their 4 points and will face either defending champions Spain or hosts France, depending on the final results of Group F.