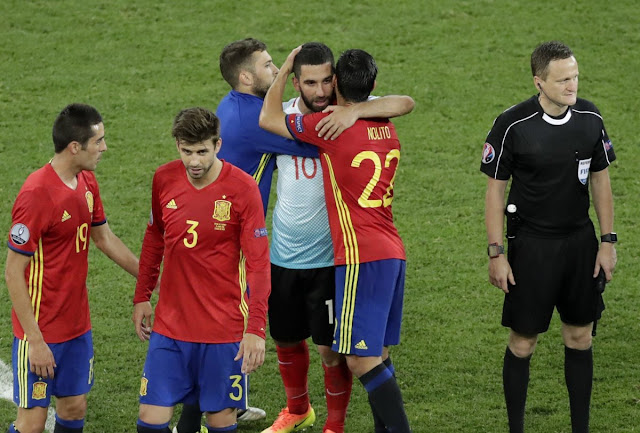 If you happened to watch the Turkey versus Spain match yesterday you likely noticed two things: the one is a dominant European defending champions side that basically took the Turkish squad "behind the shed" so to speak, and the other is Turkish fans booing and hounding their captain Arda Turan, one of the most popular Turkish footballers in decades.


But what followed the difficult 3-0 Turkey loss was signs of respect from teammates and opposition alike, as both sets of footballers took extra time after the conclusion of the match to show their support for the Barcelona and former Atlético Madrid attacking midfielder.

The fact that Turkey has underperformed in the eyes of the Turkish fans is clear, but let's be honest, in a country where national team football has slumped in recent years, it was a last qualifying match-day surprise that the Turkish team even qualified for the tournament and would have likely not even been in contention to qualify if it wasn't for their captain who started his career with Istanbul club Galatasaray.

Whatever the case, the footage at the end of the game is almost heartbreaking and beautiful all at the same time; poetry in football.