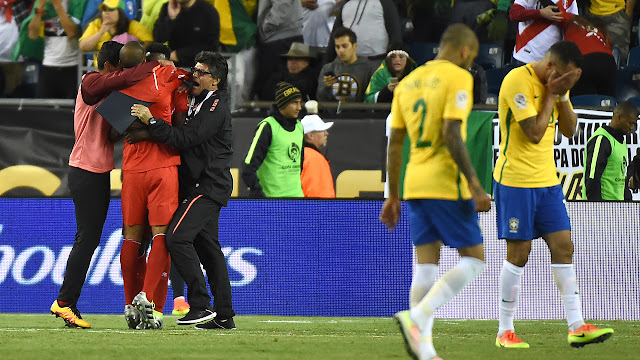 It is not one bit surprising that it would take a hand-ball kind of goal for Peru to eliminate Brazil from the 2016 Copa América Centenario tournament; after all, the record five-time World Cup champions have won the South American tournament on eight occasions, while claiming a top 4 spot 29 times.


As the final whistle sounded in Brazil's 1-0 loss to their group B opponents Peru, Raúl Ruidíaz's hand-assisted tally for the Peruvian side marked the first time Brazil would not compete past the group stages at the Copa América in 29 years.

In each of the past 11 tournaments which make up the 29-year gap, the Canarinho qualified out of the group stages, on many occasions with ease, and have won the South American football title five times. So what was it like exactly the last time they couldn't get past the first round?

Four years after Brazil lost out in the final match at the 1983 Copa América to rivals Uruguay, a tournament which back then was played on a home and away basis with no host nation, the runner-ups were travelling to Argentina in 1987 for a Copa América tournament that once again after 20 years had a single host. Having historically never won the competition while it is hosted within Argentine borders the odds were stacked against Brazil, with the host nation having just won the 1986 World Cup title, while Brazil was experiencing a bit of a lull in their footballing world dominance.

In a tournament without invitee nations and Uruguay being handed an automatic spot in the semi-finals, the remaining 9 CONMEBOL nations were divided into three groups of three teams where only the top team progresses to the next round (the semi-finals); Brazil were drawn with Venezuela and Chile in Group B.

With manager Carlos Alberto Silva's young squad selection for the tournament which only included two players over the age of 30, Brazil's 5-0 win over Venezuela was a promising start to the tournament, and with Chile's much less impressive 3-1 victory over the same opponents even a draw in their second match of the tournament would hand the Brazilians a spot in the semi-finals. 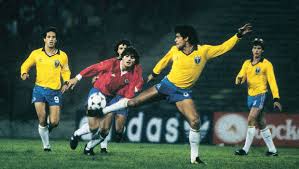 But unlike Peru in last night's match, the Chileans would humiliate Brazil, much to the delight of the local Argentine's. At the Estadio Olímpico Chateau Carrera (now the Estadio Mario Alberto Kempes) in front of 15,000 spectators, Chile would go 1-0 up in the first half and would never look back. With the one goal lead staying true at the end of the first 45, Brazil's chances were shattered completely after the restart when Chile found the net again in the 48th, 68th and once more in the 75th minute to send Brazil crashing out of the tournament. Scoring a brace each, Chilean strikers Ivo Basay and Juan Carlos Letelier wouldn't score in the tournament again even though their side managed a 2-1 win in the semi-finals, eventually being shut-out by champions Uruguay in the final match.

For Brazil, this tournament would mark the last time they were eliminated at the group stages of the Copa América; that of course until last night's match, a controversial 1-0 victory for opponents Peru that sees the five-time World Champions heading to the airport along with Group B fellow eliminated squad Haiti.
SHARE SHARE SHARE