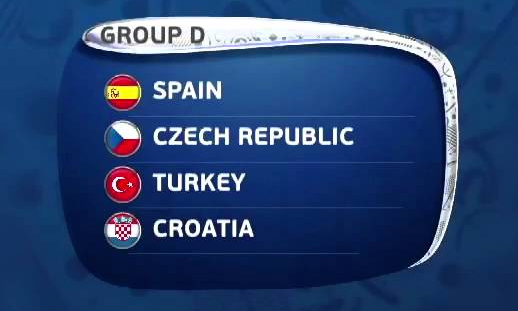 After a couple of big and small surprises in between groups A, B and C which we simulated this week, it would hardly be a surprise whichever way this group D plays out. Defending European champions Spain were on a high after leaving Ukraine in 2012 with the European trophy in-hand, but failed miserably at the 2014 FIFA World Cup in Brazil. The Czechs, Turks and Croats are all strong sides which makes this Group D a bit unpredictable. But what does the FootyFair simulator say?

Euro semi-finalists in 2008, Turkey was taking on Croatia in the first match of Group D and the action on the pitch did not disappoint. Action packed and with lots of chances on both goals Turkey struck first with none other than the captain himself Arda Turan slotting the ball in the back of Croatia's net in the 37th minute after a great passing lead-up play. Croatia would snatch one back just before the half as Inter's Ivan Perišić's shot from outside of the box was too strong for the Turkish keeper to handle. The second half saw the pace slow a bit, as both sides decided to play safer after a very open first 45. But the only goal and the eventual winner came just 7 minutes after the restart with Turkey's Burak Yılmaz handing his side the crucial 3 points.

Playing a day after the Turkey versus Croatia match, defending European champions Spain were hoping to get off to a better start than their title defense at the 2014 FIFA World Cup. But it was the Czechs who started with confidence as Tomáš Necid's 20th minute goal gave his side the 1-0 lead, a scoreline that would remain after the first 45. But Spain was strong out of the gate for the second half and would mesmerize fans with three goals in a span of 6 minutes with Atletico Madrid's Koke beginning the onslaught in the 64th before David Silva scored twice to give Spain the 3 points.

Anything but a win would be a huge blow for either side in this match after neither were able to steal a point in their first outings. As they did against Spain, the Czechs came out strong and confident and would take a 1-0 lead for the second straight match when 23 year old Sparta Prague winger Ladislav Krejčí put the ball in the back of Danijel Subašić's net. Unlike in their first match however, the Czech defence came through while Croatia struggled to penetrate and although creating a few good chances were held off the scoresheet and very likely out of the next stage of the tournament also.

With both sides picking up the full amount of points in their first matches, a win in this one would be crucial and would send the winner to the next stage of the competition. But unlike Spain's second half against the Czechs, the defending champions struggled to get any kind of flow going against a stubborn Turkish side, who in fact enjoyed the better chances during the scoreless first half. But, as the 64th minute proved to be the time of Spain's first goal against the Czechs, so was the case in their second match when Chelsea's Pedro scored the only goal of the match; a win for Spain that guarantees Vicente del Bosque's side a spot in the quarter-finals.

While a draw would guarantee both teams a spot in the next round, the Czech's would need a win against Turkey to secure a second spot in the group due to their opponent's superior goal differential. But it seemed that Pavel Vrba's side were content with settling for one of the four best 3rd place spot (which would be guaranteed with 4 points) as the match was slow in pace and short on scoring chances, as both teams celebrated after the final whistle not needing to know the result of the Croatia versus Spain outcome to know they were through to the next round.

While Spain were already guaranteed a spot in the next round, Croatia's chances were slim with only a win against their opponents on the day combined with a loss for either Czechs or Turkey and a better eventual goal differential to that of the losing side from the other match would send the Croats through. Led by midfielder Luka Modrić who plays in Spain's La Liga with Real Madrid the Croats looked confident in their play. With Spain unable to score in the first half for the third straight match, Croatia grew in confidence and were in fact able to score the match's only goal in the 72nd minute when Juventus' Mario Mandžukić put the ball in the back of the net. Their celebrations were short lived however, as they got word of Turkey's 0-0 draw with the Czechs at the end of the match; sending Croatia crashing out of the tournament despite a spectacular effort against the group leaders, which unfortunately proved too little too late.

Despite their loss to Croatia defending champions Spain move on to the next round as the winners of the group and await their opponents in the quarter finals which will be one of the best 3rd place finishers from one of group B, E or F. Turkey meanwhile came into group D as somewhat of an underdog but proved they can play with the big dogs, finishing in the runner-up spot and awaiting the winners of group E who will be their opponents in the next round. Czech Republic, while guaranteed a spot in the quarter-finals (as both Walse and Northern Ireland finished 3rd in their group but just on 2 points each), but their opponents will likely not be known until the final day of group stage play.
SHARE SHARE SHARE