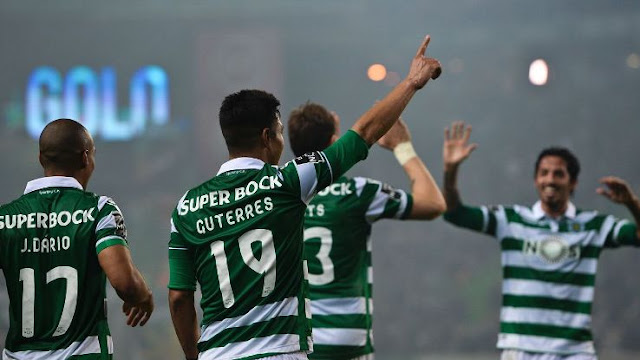 In 1997, David Beckham came on the pitch for Manchester United for the season opening Community Shield with his name spelled out on the back of his kit as Beckam.

It was rumoured at the time that manager Sir Alex Ferguson had arranged for his kit to be misspelled for the purpose of bringing his then emerging star down to earth.

Although that's never been confirmed, and could well have simply been a mistake by the kitman, it's now apparent that when Sporting Lisbon took to the pitch on Saturday against Arouca the misspelled kits each of their players were wearing was very much deliberate.

As Sporting romped to a 5-1 victory, fans sitting close enough to the pitch were shaking their heads at the names on their beloved side's kits.

With Colombian striker Teo Gutierrez's jersey displaying the name Guterres for example, fans must have assumed that their kitman was having a day from hell.

The stadium announcer finally shed some light on what was thought to be an epic kit debacle when he said that the poor spelling was a deliberate attempt to dissuade fans from buying knock-off gear.