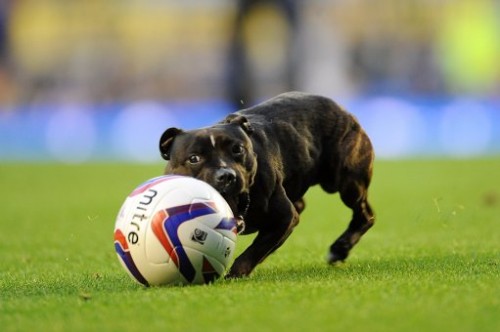 The majority of goals in football are of course scored by the players that get paid to do just that. Every once in a while however, the last touch of the ball doesn't go off a professional footballer, be it in an official match or a kickabout in the yard.

This Argentine K9 seems to know his role in the match pretty well. Positioning himself strategically at the far post, a good cross allows the dog to score an easy tap-in.

It'll be a long time before Liverpool fans forget about that famous beach ball that allowed Sunderland to snatch 3 points against LFC. Thrown by a fan onto the pitch, the red beach ball became quite famous as replicas were flying off the shelves after its one and only EPL appearance.

The goal didn't count but this manager's volley from the coach's technical area is quite impressive. The bench-boss even throws his arms up in celebration and applauds towards the fans as if he had just scored the match winning goal.

In a charity match in Russia, the retiring footballer who's name the match was held in the first place makes way to a 5 year old. After the substitution the kid scores a goal and his excitement is fantastic to see.

Perhaps one of the most famous streaking incidents in any sport, a Spanish football fan takes her clothes off and makes her way onto the pitch. A defensive clearance of the ball places it right in her patch, only for her to score a highlight worthy goal into the bottom corner.

In one of the most bizarre instances in football, a ball-boy puts the ball in the back of the net after the initial shot was deemed to be out and a goal-kick awarded. But when the referee saw the ball inside the goal, he changed his call and awarded a goal.