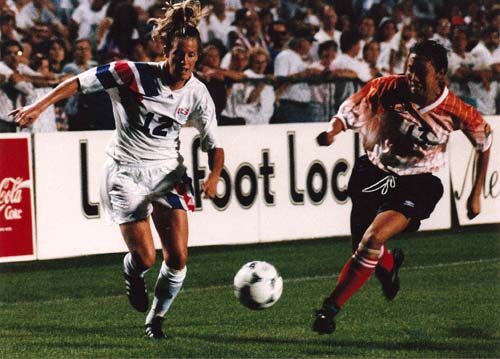 1991 marked the year of the first ever Women's Football World Cup tournament. Hosted across 6 venues in China, November of '91 belonged to the women's game.

As is the case with many inaugural seasons or tournaments the lead-up to the 1991 FIFA Women's World Cup was full of skepticism and uncertainty. Even simple football rules were questioned for the use in the women's tournament. Using a size five ball and playing 90 minutes same as the men were both debated by organizers.

But despite many obstacles the 1991 tournament not only took place, it was a success and an event that would change women's football forever.

12 participating nations qualified to the inaugural Women's tournament going through their continent's championships. Every one of the six confederations was represented and the twelve teams were divided into three groups of four, with the top two teams and two best 3rd place teams qualifying to the quarterfinal.

On November 16th, 1991 the Tianhe Stadium in Guangzhou hosted the opening match of the tournament, as 65,000 spectators came out to watch the host nation China take on one of the tournament favorites Norway. The crowd got exactly what they came for, a strong 4-0 victory for China in the first ever FIFA Women's World Cup match.

In the tournament's final match, that same Norwegian squad that lost to the hosts in the very first game was to face the United States in the first ever FIFA Women's World Cup Final. On November 30th, 1991 and in front of a crowd of 63,000 people, USA would lift the first ever tournament trophy after coming out with the 2-1 win. Sweden won the bronze medals after defeating Germany in the 3rd place match by a final score of 4-0.

The tournament was considered huge success, averaging 19,615 spectators per match. FIFA president João Havelange said "As president of FIFA it was a special pleasure for me to watch these young ladies playing with such flair and such elegance, and according to the reports of the many media representatives present, making the game truly into a celebration ... women's football is now well and truly established."