Stoke City Over Schalke? Come on! 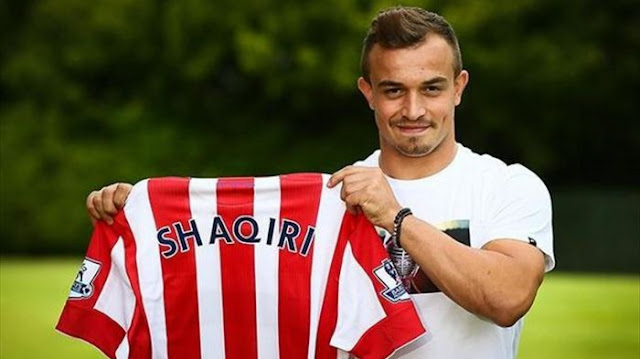 The question "Can he do it on a wet, windy Tuesday night in Stoke?" was posed by former Sky Sports analyst Andy Gray after watching a rampant Lionel Messi destroy someone in the Champions League a few years back.

It smacked of the age old British prejudice that those "fancy foreigners don't like it up 'em", but it's nonsense really as Messi has played in all conditions and come up against all manner of opposition who have tried to kick him across the pitch, but still done the business.

But the other aspect of that question is the aspersion it casts on Stoke, in that's it's a cold, wet and harsh place that will destroy most mortals.

Certainly Bayern Munich legend and notorious bad boy Stefan Effenberg was questioning why Xherdan Shaqiri would move their in favour of a transfer to Schalke this week and really tore into the winger. Following Shaqiri's £12 million move to the Britannia from Inter Milan on a 5 year deal, Effenberg let rip with the following:

"I do not understand Shaqiri’s move to Stoke at all. You have been badly advised if you go there.

You have to ask yourself where you can reach your sporting goals as a footballer.

That should be the challenge. Schalke would have been perfect for Shaqiri.

Earning €1million more or less should be irrelevant. When you can make €6million at Stoke or €3million at Schalke, you pick the latter.

You play Bundesliga football in a great stadium, get your desired return to Germany and play for a great club that you can help move forward.

But Stoke? Come on, I cannot understand the player, his agent, his parents or his brother.

This is a shame and a sad state of affairs. Only because they are throwing around cash? Is it really all about money for footballers these days?"

Hard to see Effenberg invited to watch a match in Stoke anytime soon, even on a wet, windy night.