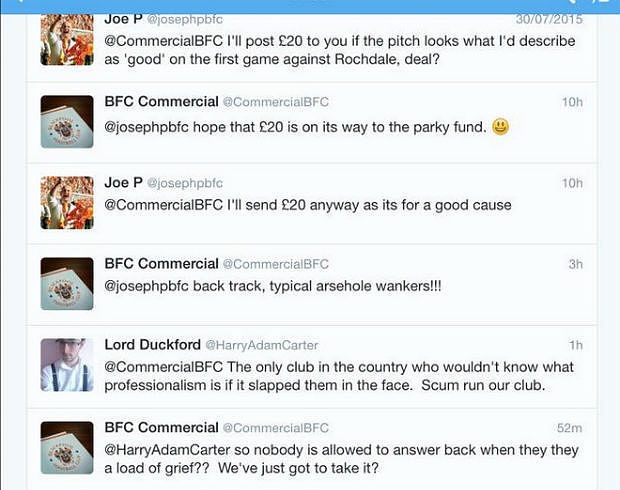 Blackpool FC supporters have had it rough over the past few years with the club going through five managers in two and a half seasons, while in the midst of being relegated to League One.

A fractious relationship between the club's ownership and the supporters got worst this week as Blackpool's commercial opportunities Twitter account bulldozed their way onto our list of 5 Football Social Media Disasters:

Trouble started this weekend when a Blackpool fan contacted @CommercialBFC and offered to donate £20 to charity if the often brutal Bloomfield Road pitch would be in decent shape for a match against Rochdale. After the official account responded that he'd better have his donation ready, the fan said he would donate it any way. He was then blasted with: "back track, typical arsehole wankers!!!"

In August 2011, Newcastle United told their fiery midfielder Joey Barton that he could leave on a free transfer. The reason? He had publicly criticized the club on Twitter. Barton had said of the club's board that summer: "And again it would be left to those magnificent fans to pick up the remnants of their once great football club. #hadenoughofcertainpeople”.
He isn't wrong though.

Swiss defender Michel Morganella landed himself in hot water after his side were defeated in the 2012 Olympic tournament by South Korea when he angrily tweeted: "I'm going to beat up every Korean. Go on - burn yourselves! Bunch of Motherfuckers."
He was subsequently thrown off the team and has only won a single cap since 2012.

No Love Lost Between Local Rivals

After defeating local rivals Wolves in 2013, Walsall FC's official Twitter account blasted: "@OfficialWoves Better look next time you six fingered, inbred, dingle bastards. YOU’VE LET US DOWN AGAIN!!!!”
The spelling was atrocious, but even more laughable was the club's excuse that their account had been hacked.

Liverpool player Ryan Babel was censured by the English FA in 2010-11 for posting a photograph of the referee Howard Webb mocked up in a Manchester United shirt on Twitter, in clear reference to the popular assertion that Webb gave United favourable calls.
SHARE SHARE SHARE