Home » Adidas , BMO Field , Kit , kits , Supporters , Toronto FC » Does the Colour of Your Team's Kit Matter to You?

Does the Colour of Your Team's Kit Matter to You? 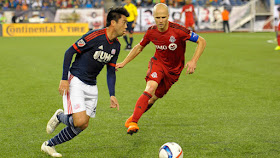 Supporters of my local club Toronto FC haven't had it easy over the past nine years. Eight losing seasons took their toll on TFC's followers and even last season's much improved campaign ended on a sour note when they were dumped out of the playoffs in a one match winner take all defeat to arch rivals Montreal.

This offseason the patience of the MLS club's supporters has been tested once again as they've seen their BMO Field ground broken up and reworked to accommodate the CFL's Toronto Argonauts and now it's been heavily rumoured that their new away kits are going to be blue.

So what's the problem with blue you might ask? Well, there's two strikes against that particular colour in that blue is the Argos colour, and TFC fans are not enamoured by the fact that they'll now be ground sharing with the gridiron franchise and will likely lose their natural grass playing surface, and also that blue is the colour of Montreal.

But does the colour of your kit matter? I feel it does, as I wouldn't want to see Manchester United trotting out in a sky blue kit like Manchester City and I'm certain that Boca Juniors fans would be enraged if their club adopted white kits with red sashes like River Plate.

While some feel that the colour of the team's kits don't matter, I feel that it's part of their identity and it shows a lack of understanding by a club's ownership if they mess with a detail like this.

What do you think?