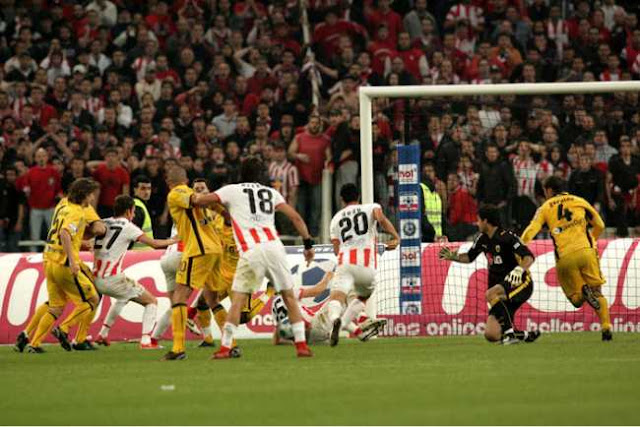 In our newest weekly column, Incredible Matches will feature a single classic football match from the long and beautiful history of the game. Some will be well known classics, while others may be from a part of the world which some of our readers do not follow at all as far as football is concerned.


Our first stop is Greece. The year is 2009, the competition is the Greek Cup Final and the venue is the Olympic stadium in Athens, home of club AEK who have won the cup 13 times before. But the opposition wasn't to be taken lightly; if anything, Olympiacos (who would become that season's league champions) were in fact the favorites in the match, despite AEK's home advantage. Eight goals split evenly, three red cards, extra-time and 34 penalty shots later, this meeting deserves the title of an "Incredible Match".

Led by a brace from Argentine Ismael Blanco, AEK would jump out to a 2-0 lead before the 10 minute mark of the match. It would take Olympiacos 64 minutes before they were tied at two goals a piece in the 72nd. It looked all but finished when AEK's "other" Argentine Ignacio Scocco helped the home side retake the lead, a 3-2 scoreline in the 90th minute. But injury time would be the savior of the red and white club from Piraeus as Englishman Matt Derbyshire who scored the club's first goal on the day, scored once more, this time in the 96th minute, sending the two sides to extra-time.

With AEK down to ten men Olympiacos would score first in the extra frame, but with two red cards given out to the away side AEK would make it level once again, a 107th minute goal from Ignacio Scocco that would see the two clubs take part in a very long penalty shootout, to see who would claim the 2008-09 Greek Cup.

Yet another Argentine would have to be the hero if AEK was going to claim the victory as Sebástian Saja was the man between the woodwork for the home side. Olympiacos' net was guarded by none other than captain and Greek international keeper icon Antonios Nikopolidis. Both Nikopolidis and Saja would enjoy time in the spotlight on the night after saving two of the first 16 spot kicks for each club. The two 17th shots for each club would decide the match, as AEK's Agustín Pelletieri's kick was saved by Nikopolidis, and then the keeper himself would go on to score the match winning penalty; handing Olympiacos their 24th Greek Cup title.

Widely considered the best ever Greek Cup final, this match was one for the ages. Enjoy the extended match highlights below. (If there is any "Incredible Match" you would like us to feature here at FootyFair email us at info@footyfair.com)