Toronto FC and the Reality of Emotional Exhaustion 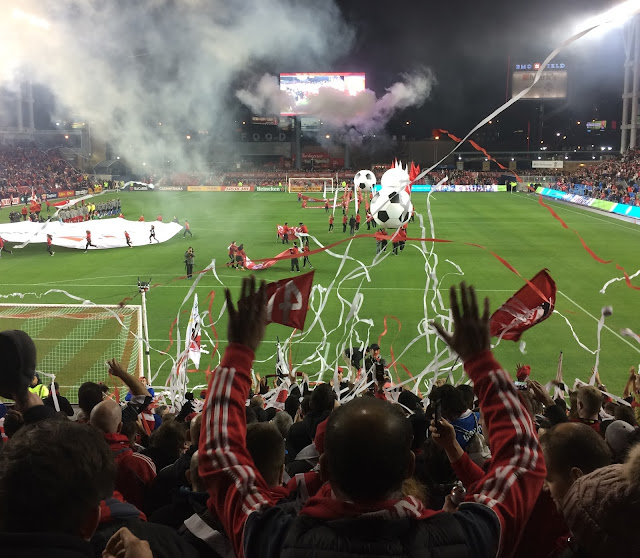 There is such a thing as emotional exhaustion. I learned that on a charged Wednesday night at BMO Field in Toronto a little over a week ago.

The result on the night was that our hometown club, Toronto FC, defeated their arch rivals Montreal Impact by a score of 5-2 to complete a 7-5 aggregate victory across two action packed MLS Eastern Conference Final legs, but this went beyond mere results.

It's impossible to explain emotional exhaustion, followed by a day suffering from what can only be described as an emotional hangover, over a football result to a someone who doesn't follow the sport. Hell, even some of those that do consider themselves to be football fans might not even be able to understand this concept.

I'm not an overly emotional guy, sure I love my family and experience the highs and lows that comes with them. I also experience blinding rage when it comes to the habits, and dirty smells, of my fellow train commuters. But on the whole I don't do things like cry over films, I give awkward hugs and I'm not a huge fan of over exuberant displays of affection. Maybe it's an ingrained British thing. At least I hope it's that, and I'm not just an undiagnosed, but highly functioning, sociopath.

But Wednesday night was a bit different for me and to understand why I was throwing myself around in the stands, hugging complete strangers and on the verge of tears at times you need to know what it's like to not just follow a team like Toronto FC, but to have at one point lived and breathed them. 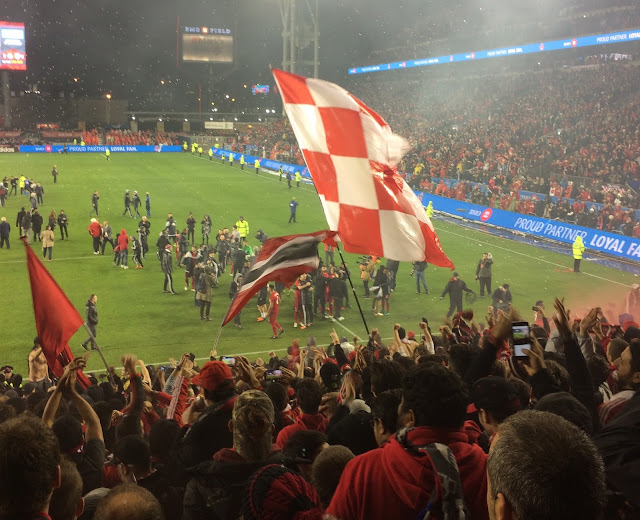 For the first seven years of the club's existence I was in a supporters group where I did things like spending Saturday's in February in cold barns or underground parking lots painting banners to support the team. I got in on roadtrips to New York, New England, Columbus (3 times), Chicago, Montreal and DC to see the team usually lose away. I spent long hours into the night working in Photoshop and Illustrator on designs for scarves, banners and t-shirts for my fellow supporters. But there were others in my group that did far more than I did.

In the midst of all of this I forged many great friendships, some of which I still have to this day. We organized pub nights, got together for birthdays and weddings, supported each others businesses, debating things online or in person, and even organized vacations together.

But Toronto FC's constant losing, the battles with the front office over issues around ticket prices or what we could or could not do in the stands took it's toll. Our group split up and unfortunately some of the bonds I'd had with people who were as close as family were severed completely. When you love something like we loved the club and our group so much the passion you have can go overboard.

There was a negative atmosphere around the club itself, probably reaching it's nadir under the awful tenureship of Paul Mariner in 2012. That, and the disastrous 2013 season under Kevin Payne and Ryan Nelson, seemed to be the tipping point for many.

Besides the losing on the field the club seemed to do their best to remind us of what an ugly corporate entity their ownership group Maple Leaf Sports and Entertainment (MLSE) could be, as they raised ticket prices for the first five seasons, sandwiched in unnecessary mid-season friendlies with European clubs, and even forced half season ticket holders to buy Toronto Marlies minor league hockey tickets the one year.

Even this week they reminded me of some of their more wretched practices when they allowed the lead-up to the MLS Cup to be somewhat sullied with a ticketing fiasco that left many season ticket holders uprooted from their normal seats, while scores of other single match tickets ended up on resale sites for ludicrous prices. TFC even provides a how-to guide on how to take advantage of the Secondary Ticketing Market with a link on their website.

While some of my fellow former North End Elite (NEE) members joined other groups or just started attending matches as every day fans, several like myself stepped away, picking and choosing which matches we went to.

I still loved the club, watching nearly every match on TV, and came out to a handful of matches a season, but life and different responsibilities had come up that didn't allow me to give what I once had to TFC.

The irony though, after suffering through all of those losing seasons, is that in my time away Toronto FC had gotten to be pretty damn good. Bolstered by Italian superstar Sebastian Giovinco and American internationals Jozy Altidore and Michael Bradley, TFC had just about made the playoffs in 2015 before falling to Montreal at the first hurdle.

This season saw the club take down Philadelphia 3-1 in the first round of the playoffs, before stunning New York City 7-0 over two legs in the Eastern Conference Semi-Final. The 5-0 return leg thumbing of New York at Yankee Stadium has to go down as one of Toronto's most emphatic wins ever.

In the Conference Final they faced off against their old rivals from Montreal and after going down 3-0 by goals from Dominic Oduro, Matteo Mancosu, and Ambroise Oyongo in the first leg our hometown club looked dead and buried. But out of nowhere Jozy Altidore dragged them back into the tie with a 68th minute goal before Michael Bradley grabbed a second on 73 minutes. Despite a 3-2 loss, with two away goals the second leg was finely poised for Toronto.

I worried about being seen as a bandwagon jumper coming back after my seasons away for the Conference Final, and maybe I was, but I couldn't miss this match after all the hard time I'd put in with my friends in those early years. It was the biggest night in the club's history and I couldn't stay away from BMO.

My dad, who stood with us in NEE many times came along with me that night and even though we were missing my brother who is living in Japan, I knew he was tuning in. 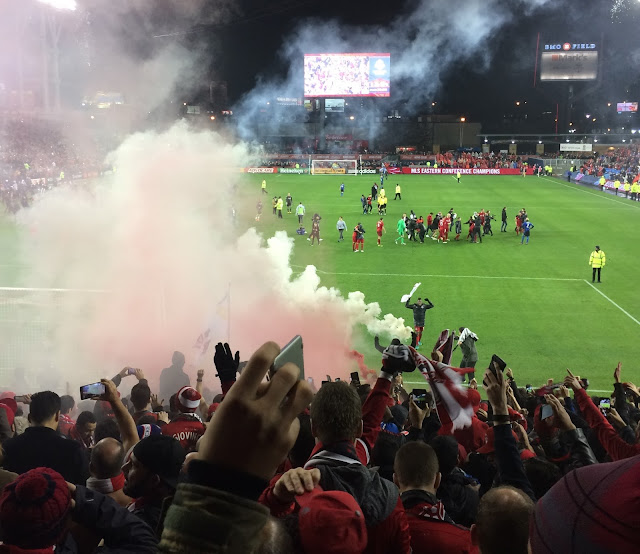 Taking our place in the South End, I marveled again at what the newer supporters group Inebriatti has brought to the ground in terms of their incredible enthusiasm and terrific displays. I continue to respect the passion that Red Patch Boys and the other remaining groups show for the club. This night was for all of them.

The noise generated by the 36,000 in BMO Field on Wednesday night left the hairs on your neck standing on end. Even when we went 1-0 down to the Impact through another goal by Oduro, the fans just kept chanting and singing. Incredibly we came back with two goals before the break through Armando Cooper and Altidore to lead 2-1 and take the lead across the two legs by virtue of the away goals rule.

We were forty-five minutes from the MLS Cup Final and I think I may have been thrown several feet in the air by the fella next to me when our second one went in.

Disaster struck early in the second half when Montreal equalized through Ignacio Piatti and in the process wiped out our two away goal cushion. TFC were in deep trouble and at one point I felt a pain in my chest that led me to think that I might be having a heart attack.

Again though, the crowd didn't let up and in the midst of cauldron of noise, Nick Hagglund thundered in a powerful 68th minute header that put TFC up 3-2 on the night and leveled the tie.

In extra-time, disaster seemed to strike as Giovinco had to be taken off with a suspected cramp, but substitute Benoit Cheyrou found the net for the home side on 98 minutes and the ground seemed on the verge of tearing itself apart such was the reaction of the crowd.

Two minutes later, Altidore did incredibly well to win a ball on the right hand side before crossing low for Canadian international Tosaint Ricketts to seemingly put the tie beyond Montreal.

For many of us it was the most thrilling match we've seen on Canadian soil and almost certainly the loudest Toronto FC's home ground has ever been.

I couldn't believe it and half expected to wake up the next day to find that it was an alcohol induced dream or something. Walking away from BMO Field, I couldn't help but think of the first few years supporting the club and how we never in our wildest dreams thought we'd reach this point.

Now all we need is a win on Saturday in MLS Cup 2016 over Seattle to complete what has been a remarkable run for this once beleaguered team.
SHARE SHARE SHARE