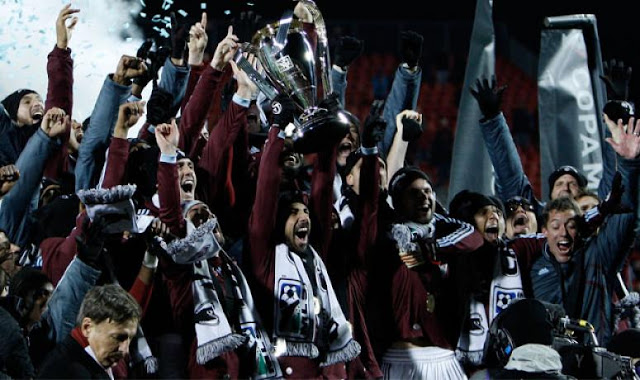 Few would have predicted a meeting between Toronto FC and Seattle Sounders in this year's MLS Cup final. For Toronto, ten tough years in the league would have been enough to keep critics clear of a deep playoff run prediction, while for Seattle it was simply a sub-par start to the season that signaled an unlikely post-season appearance altogether. While Seattle has clinched the playoffs in each of their eight years in the league, neither club has had the fortune of lifting the MLS Cup trophy to date. So, while December 10th will mark a historic and somewhat surprising win for one of those cities, we take a look at five previous MLS Cup winners that lifted Major League Soccer's championship trophy despite all odds being against them.

Not many experts are ever crazy enough to pick an expansion team to win a major trophy in their very first year of existence. But the newly formed Chicago Fire team of 1998 would go on to prove many wrong, as they stormed through their inaugural season to not only capture the MLS Cup, but also the US Open Cup. With future US men's national team coach Bob Bradley in his first year in-charge of a professional football club and the likes of Zach Thornton and Ante Razov on the pitch, the Fire were nearly unstoppable, defeating DC United in the MLS Cup final after a season which saw Bradley's side record a remarkable 11 game winning streak. Ironically, this is still Chicago's only MLS Cup victory to date.

After finishing dead last in the standings the year before, San Jose's newcomers Dwayne De Rosario and loanee Landon Donovan would prove key to the club's first ever MLS Cup victory. After securing 2nd place in the Western division, San Jose would go on to defeat Columbus, Supporters' Shield winners Miami Fusion before defeating LA Galaxy by a score of 2-1 in a final that saw Donovan tie the game up, before De Rosario scored the winner in a "sudden death" extra-time frame.

Squeaking into the last playoff spot of the '09 season, Real Salt Lake were given no chance of making any kind of an impressive run as they were to start the post-season by facing Supporters' Shield winners Columbus Crew. After winning both legs against the Crew, Real's semi-final PK victory against the Chicago Fire would see the club compete in their first ever MLS Cup final against a star-studded LA Galaxy side led by Landon Donovan and the most iconic Designated Player in the MLS, David Beckham. After going 1-0 down to a Mike Magee goal, Salt Lake managed to tie things up with a goal from Robbie Findley, a 1-1 scoreline that would hold to see the two sides decide the championship via a penalty shootout. Galaxy misses from Jovan Kirovski, Landon Donovan and Edson Buddle would hand Real Salt Lake their first and a very unlikely MLS Cup title.

This was an MLS Cup final I personally attended, and to be honest it was less than stellar both in level of interest and location. Having a Colorado team that finished 5th in their conference face an FC Dallas squad one star player short of having a "star player" at BMO Field in Toronto was always a recipe for a dull final. Nonetheless, after going 1-0 down in the first half the Rapids captured their first and only MLS Cup with a goal from Conor Casey and a Dallas own-goal in extra-time.

Usually, a Galaxy squad winning the league is not a big surprise, but in 2005 Los Angeles entered the playoffs with less points than any of their post-season rivals. In reality, this squad was probably the worst side to ever win the cup to this day! To make things even more ironic, it was LA's Guatemalan midfielder Guillermo Ramirez who scored the only goal of the finals against the New England Revolution, which was also his lone goal in 24 matches with the Galaxy.