Throwback Thursdays: Beckham Announces Himself to the World (1996) 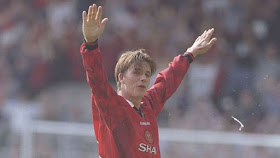 On the 17th of August 1996, Manchester United kicked off the defense of their English Premier League title with a 3-0 away win over Wimbledon at Selhurst Park.

A fairly routine sounding win over a side that would be uprooted to Milton Keynes within a few years may seem to the average reader like a pretty nondescript article for a Throwback Thursday piece, but the third goal in this contest changed the life of one of United's players and catapulted him to stardom few footballers have experienced before or since.

Before that 90th minute strike though, Eric Cantona the mercurial Frenchman who had led United to the league and cup double in 1995-1996 opened the scoring with a well struck effort in the 25th minute.

With the points already in the bag, and the match almost at it's conclusion, David Beckham received the ball just inside his own half and spotted Neil Sullivan off his line.

Beckham, at that point had made 42 league appearances for the club and was recognized as a key piece of the young side that had taken the club to such unexpected heights the previous season. He was about to become a superstar though.

Moving up towards the halfway line, Beckham hammered a hard, looping shot towards Sullivan's goal. 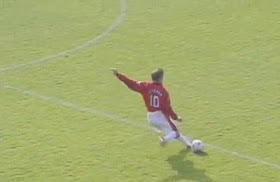 Racing back to try and keep it out, the helpless Sullivan could only look on as the ball sailed past him and into the net.

Beckham would then find himself on the cover of all the major British sports pages the next day and the boy from Leytonstone would quickly become a household name.

The United winger would later say of that goal: "It changed my life. The ball seemed to be in the air for hours and it all went quiet. Then the ball went in and it just erupted. I was on cloud nine. I just wanted to shake everybody's hand and be out on the pitch for an hour."

Beckham would go from strength to strength as he helped United defend their league title that season.

Success on the pitch also led to much attention off of it, and when he started dating Spice Girl singer Victoria Adams in 1997 the famous couple came to be dubbed "Posh and Becks" by the British Press. 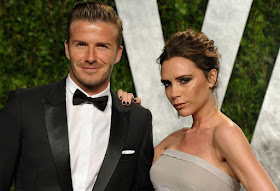