Throwback Thursdays: How Greece Shocked the World and Won Euro 2004 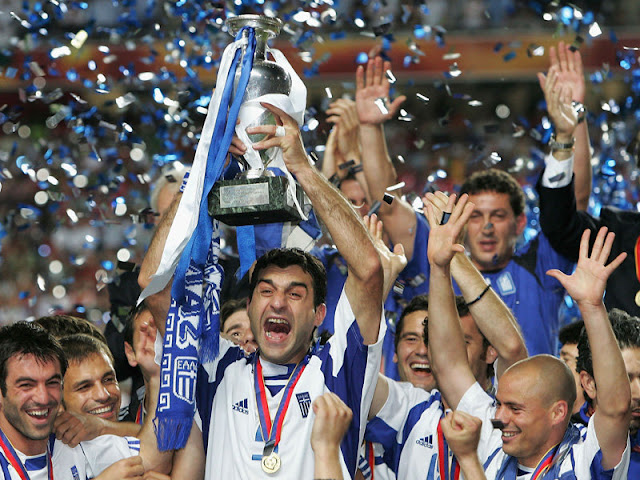 Whenever an underdog upsets the odds by coming out of nowhere to achieve victory in a prestigious competition, like this past seasons English Premier League champions Leicester City, it's typically celebrated by neutrals and perceived as a feel good story for the ages.

Greece's unlikely triumph at the 2004 UEFA European Championships, although an absolutely incredible achievement, isn't quite viewed in the same rose tinted light as other David toppling Goliath stories though.

For a nation that hadn't qualified for a European finals since 1980 and had been dumped out of their only World Cup appearance in 1994 at the group stage, scoring zero goals while allowing ten, very little was expected of them heading into Euro 2004 in Portugal.

After failing to qualify for the 2002 World Cup, the Greek Football Association handed the managerial reigns over to the experienced German manager Otto Rehhagel and immediately he began to exert his will on the squad.

A strict disciplinarian, who favours a rigid defensive style, Rehhagel reshaped the Greek setup by devising a tactical system to fit their squad that emphasized strict man marking and defensive approach that made them very difficult to break down.

Greece qualified for Euro 2004 on the back of six wins out of eight in their qualifying group, including a key victory in Spain which propelled them ahead of La Roja as the top placed finishers in the group.

They appeared to have their work cut out for them at the finals though when they were placed in a group with Spain (again), hosts Portugal, and Russia.

With expectations in check, their campaign got off to a flying start as goals from Giorgos Karagounis and Angelos Basinas saw them spoil the hosts party with a 2-1 win in the tournament opener and they would then follow that up with a battling 1-1 draw with Spain thanks to a goal from Angelos Charisteas.

Despite a 2-1 loss to Russia in their final group match they edged out Spain for a spot in the Quarter-Finals.

Facing the reigning European Champions France though, few gave Greece much of a hope against the Zinedine Zidane led side that also featured stars such as Robert Pires and Thierry Henry in their ranks.

Another goal from Charisteas gave Greece an unlikely lead, and with Rehhagel's suffocating defensive setup stifled the French attack they were unbelievably through to the Semi-Final. 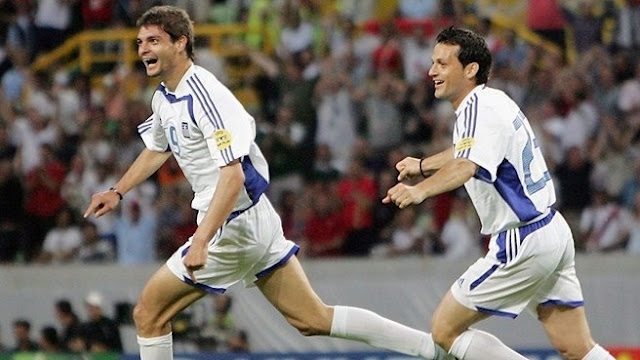 In their way stood an impressive Czech Republic side who had been, arguably, the best team to watch in the competition. Although, Greece were the definite underdogs their unattractive, defensive style of play had many neutrals hoping that the Czech's would progress at their expense to the final.

Again though, Greece shutdown their opponents much vaunted attack and an extra-time goal from Traianos Dellas sent them through to the final against Portugal.

The Greeks, who were 100 to 1 outsiders before the tournament, had both amazed but also sickened football fans with their progress as they had proven that an unfancied nation could make it to a major final, but they had done so playing extremely negative football.

With the hosts almost certain of their first victory in a major tournament at hand, neutral observers such as myself were caught between wanting to witness the sight of an international footballing minnow such as Greece winning the tournament verses seeing a much more attractive football side like the favourites from Portugal collect the Henri Delaunay trophy.

Prior to the match Barry Glendenning of The Guardian billed Greece as "the only underdogs in history that everyone wants to see get beaten."

Regardless of what anyone thought of them and their supposed anti-football, Greece proceeded to shackle the Portuguese attack in the first half and into the second before some poor marking on a corner by the hosts saw Angelos Charisteas put the underdogs into the lead on 57 minutes. 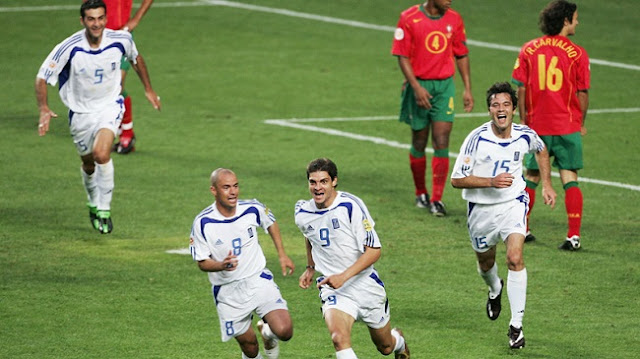 Despite the efforts of Luis Figo and company, a country that had never won a match a major tournament in it's entire history before 2004 saw out the final 33 minutes plus injury time and completed one of the biggest ever shocks in international football.