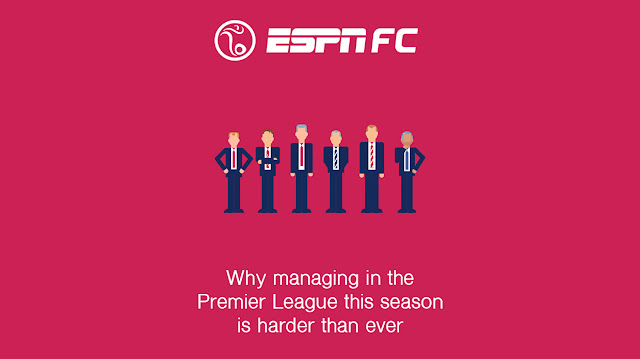 South African based Makers Company (@makers_co) had recently created a series of Gif animations for ESPN FC, showcasing in a humorous animated way why managing in the EPL this year will be more difficult than ever.

Below are the animations and the discriptions which were art directed by Neil Jamieson.

1. Hardest battles are on the sidelines

Don't expect to find comfort among your fellow managers. The tension between longtime rivals Arsene Wenger and Jose Mourinho has included several wars of words, last season's shoving match and the 2015 Community Shield's handshake snubs. What will this campaign hold in store? Their first game: Sept. 19 at Stamford Bridge. Set a reminder.

2. Perils of making your team your own

Louis Van Gaal is fond of asserting himself as Old Trafford's alpha dog. At the club's season-ending awards, LVG gave a lively, bizarre speech in front of captain Wayne Rooney & Co. He has been equally brave with transfers, the club spending over £230 million in one year on his new squad. If it fails, it's on him.

"Judge me in three years" was Liverpool boss Brendan Rodgers' infamous refrain following a bad run of form in 2012. We've reached that mark and the signs haven't been good. Liverpool have rearmed this summer after losing Luis Suarez and Raheem Sterling, but can players such as Roberto Firmino and Christian Benteke turn the Reds around? Remember: Jurgen Klopp is available.

4. Success can be fleeting

Alan Pardew's swashbuckling tactics and suave demeanour won him plenty of praise for rescuing Crystal Palace last season. Now, with Yohan Cabaye signed to add style in midfield, the bar has been raised. Can they improve on last season's 10th-place finish? If they don't, the fall could be even steeper than their rise.

England's "wally with the brolly," Steve McClaren, has taken on the herculean task of restoring Newcastle to mid-table comfort while getting along with notoriously stingy club owner Mike Ashley. The Magpies are known for selling key players, but this summer they spent handsomely on Georginio Wijnaldum, Aleksandar Mitrovic and Chancel Mbemba. Will any of it be enough?