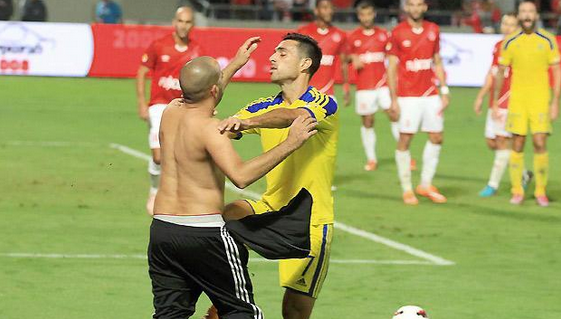 The Tel Aviv Derby is always a heated affair and creates for both a tense and exciting day in the calendar of the Israeli Premier League. This season's first league meeting between the two on Monday eve at Bloomfield Stadium created a few more sparks than usual, the conclusion of which was the abandonment of the match before the teams even managed to play a full half.


At around the 32nd minute of the first half an Hapoel Tel Aviv supporter ran onto the pitch and attacked Maccabi footballer Eran Zahavi. Zahavi who had previously played for the red outfit of this bitter rivalry scored from the spots moments earlier to draw the match level at 1-1 and seemed to taunt the Hapoel supporters in celebration of his goal. One shirtless fan was not too pleased and decided to show his displeasure by attacking Zahavi, which seemed to be too easy to do as the security did not take him away before he had enough time to attempt two kicks at the Maccabi player.


To the surprise of many, Zahavi was sent off for trying to protect himself and that seemed to be the straw that broke the camel's back, as Maccabi Tel Aviv Director of Sports and former Manchester United and Barcelona player Jordi Cruyff seemed to encourage his club to leave the field of play in protest. When Hapoel Manager and former West Ham, Celtic, Manchester City as well as Maccabi Tel Aviv footballer Eyal Berkovic was trying to convince Cruyff to keep his squad on the pitch all hell broke loose.

Supporters from both ends of the rivalry spilled onto the pitch, attacking players and police officers. One officer seemed to have been assaulted by a fan as he fell to the ground. Both teams left the pitch and the match was officially abandoned.


Eyal Berkovic was later quoted saying "This was not a game of football, it was war... I'm stunned and ashamed to be involved in football on a day like today. Both clubs and both sets of supporters must be severely punished for what happened here".

It is not yet clear whether either of the clubs will be punished and what will be the faith of this particular match.