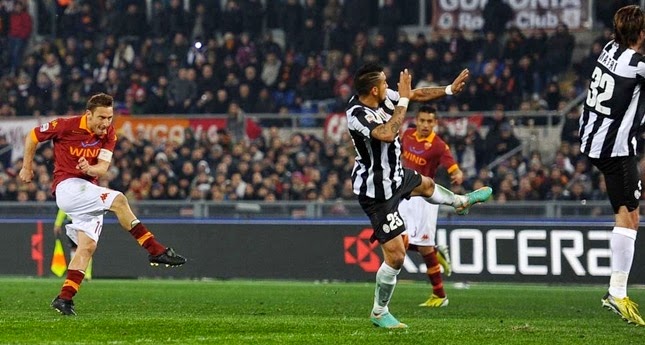 Yesterday Juventus defeated Roma 3-2 in what was without a doubt a very controversial Serie A clash.

Two teams fighting for top spot in the table and the rivalry that exists between them was sure to bring out sparks, but when you add 5 goals and three of them coming from the penalty spot, comments about refereeing are sure to surface.

The lead would not be long lived; Juventus got another penalty when Pogba was taken down at the edge of the box by Pjanic. Once again the video replay shows that perhaps Pogba embellished the play and instead of a foul, it could have been a dive. Tevez scored his second goal of the game and the second from the penalty spot. Juventus would go on to win the game with a goal from Bonucci in the 86th minute; this one could not be disputed. A long range shot from outside the penalty area gave Juventus the 3 points but left many complaining about the refereeing.

Totti, the Roma captain didn’t measure his words following the match. Blaming the poor referee for a loss that in his mind and based on his team performance should be nothing short of a win. “For years the same old incidents keep happening. I don’t know if we were beaten by referees, but we certainly were not beaten by Juventus tonight.” The captain said following the game.

He tried to contain his words, but he was obviously upset, and he may receive a fine for his comments, but it is hard to keep your emotions in check following such a match and when you lose with 2 doubtful penalties against you.

This should be enough fuel to keep journalist writing and people wondering about calls and officials for at least another week in Italy or at least until the next match where a dubious penalty is called in favor of Juventus.