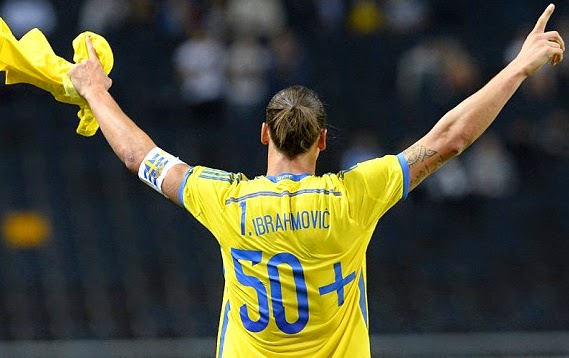 Like him or not there is no arguing the fact that Zlatan Ibrahimović is an extraordinary footballer. Earlier today Ibra became Sweden's top all-time scorer when he netted his fiftieth goal for his country in a friendly match against Estonia.

It wouldn't be Zlatan if he didn't come up with a way to make more headlines than just the right amount, as he displayed a message shirt after scoring the marquee goal. The text on his jersey read "Ni gjorde det mojligt", or "you made it possible" for those of you who haven't practiced their Swedish in a while. A message intended to the fans, the ones that watched him grow from a bad-boy youth at Malmö FF to the icon he has become in his home country and around the world today.

The record Ibrahimović broke was one set by Sven Åke Albert Rydell in 1932. An eighty two year old record that could not be broken until a Bosnian-Croatian kid, who may look like he could be from any part of the world but Scandinavia, came along and has been working towards this very achievement since his debut for Sweden in 2001.

As a matter of fact, Ibrahimović's very first competitive match for his country should have been an indication of the success that would come, as Zlatan netted his first goal for Sweden against Azerbaijan in the qualifying stage for the 2002 FIFA World Cup. But it wasn't just the fact that he scored on his competitive debut, it was how he scored, after he bounced the ball above the heads of the Azerbaijani defenders.

Since that October night against Azerbaijan Zlatan Ibrahimović has had numerous impressive, athletic, beautifully constructed goals while wearing the yellow and blue. Some of the most notable ones were the acrobatic-backward side foot-thing-a-whatever that he scored against Italy (you know exactly which one I'm talking about), and of course the insane bicycle kick from what seemed like a distance of 35 miles rather than feet, against England.

Zlatan Ibrahimović's best 15 goals according to some guy on YouTube