Home » court , FC Barcelona , Lionel Messi , messi , tax evasion » Any Given Sunday: Athletes Should Not Be Above The Law

Any Given Sunday: Athletes Should Not Be Above The Law 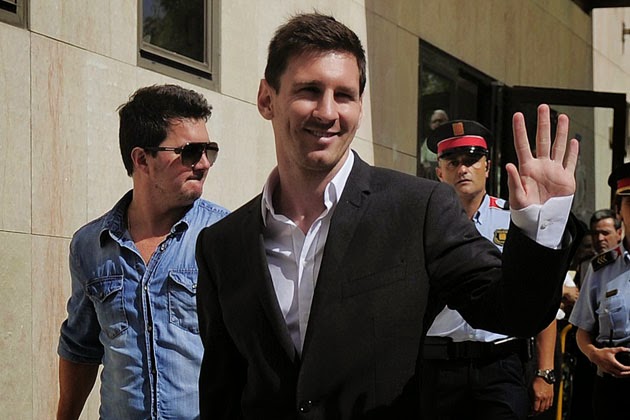 It looks like Messi hasn’t been able to dribble his way out of trouble when it comes to the allegations of tax evasion by the FC Barcelona player.

A Spanish court this week decided to push ahead with the process of charging the Barcelona player for alleged tax evasion despite the recommendations of the public prosecutor to dismiss the charges. Of all the judges Messi could have faced during this ordeal it looks like he is facing one that is not a Barcelona fan, otherwise this process would have been archived by now, this judge must be a Espanyol fan.

I for one am tired of seeing professional athletes being slapped on the wrist every time they do something wrong. The legal system and even the court of public opinion is always very quick to forgive and forget any possible wrong doing by an athlete and have the cases dropped and settled before even going to court. I am glad that this time around the judge looking after this case deemed that there was enough evidence for the case to proceed, that takes some real courage. The easiest thing here would be to take the lead from the public prosecutor and dismiss the charges and archive the case, but this judge decided to go ahead with it.

I believe that is done based on the evidence and rather not some personal agenda, because for as much as I want to see athletes treated like we all are, in the eyes of the law, I would also hate to see the opposite happen, and have an athlete being made a lightning rod of what is wrong with today’s society.

Looking at this case, what I find strange is that the public prosecutor argued that Messi’s father was in charge of the finances and therefore only he would be aware if taxes were not being paid, while the court decided that Messi must have been aware of the creation of shell companies that were allegedly used to evade taxes. Not once in any of the articles that I have read about this have I seen the words, defense lawyer. It looks to me that the public prosecutor has become Messi’s best defender, but when the guy responsible for prosecuting you is your best defender who needs a defense lawyer.

I find this dynamic very strange. If the courts found enough evidence to push this forward, why is the prosecutor whose job is to prosecute want to bail Messi out? I am not saying that Messi is guilty of any of these charges, nothing has been proven yet, I just find it strange that someone paid to charge him with an alleged crime, is the one defending him in the process.

Much ink will be wasted wring about this story for months to come and I don’t expect this case to be resolved in the short term, because any time something goes to court it takes a life of its own. I just hope that the people in charge of ensuring the law isn’t broken treat Messi the sameway they would treat any of us, if we were in the same situation he is in. No special treatment should be given to athletes, they are people just like us and deserve to be treated the sameway we should be. The message should be clear that nobody is above the law, not even one of the best football players in the world.