The Monday Meltdown - Golden Balls Up 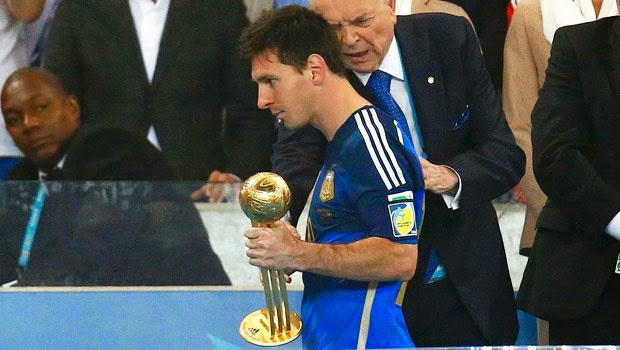 Years from now when we look back on the career of Lionel Messi we will see unbelievable statistics, read about the pile of trophies he won with Barcelona and view YouTube clips of him scoring outrageous goals in La Liga. However, we will also see that he won the 2014 World Cup's Golden Ball and remember what a pile of shit that was.

After Argentina lost the World Cup Final 1-0 to Germany in Extra Time, FIFA in their infinite wisdom handed out the player of the tournament to Messi and even he seemed embarrassed to receive it. As a movie aficionado it reminded me of how the Motion Pictures Academy has the nasty habit of handing out pity Oscars. As the diminutive Argentine collected his trophy I recalled Jack Palance doing a one armed push-up after winning the Best Supporting Actor Award for fucking City Slickers.

But perhaps commercial partnerships and marketing had something to do with this fiasco. The FIFA Golden Ball is sponsored by Adidas after all, so it makes sense from a business perspective to give the award to Adidas' poster child. FIFA President Sepp Blatter and the rest of his odious cronies know what side their bread is buttered. Even Argentina legend Diego Maradona shared this view:

“Messi? I would give him heaven if possible,” the 1986 World Cup winner said on his television show on Telesur. “But it’s not right when someone wins something that he shouldn’t have won just because of some marketing plan.”


Did Messi have a horrible tournament? Of course not, but if you look at the four goals he scored they all came in the group stage against fairly average opposition. Placed in a group with Bosnia, Nigeria and Iran, with all due respect to those countries, this was not the toughest draw for the South American side. Messi was then largely anonymous for the knockout stages.

It was defensive solidity that was largely responsible for Argentina making it to the World Cup Final, and perhaps the teams structure did stunt Messi's effectiveness.

If you look at who should have won the Golden Ball, a case could certainly be made for Colombia's excellent James Rodriguez. But with his side being eliminated in the Quarter Finals it was always going to be a stretch for Rodriguez to claim the best player prize, despite his six goals and overall terrific play.

In dragging, and in some instances diving, his side through to the last four, the Netherlands' Arjen Robben may have also been in with a shout for the Golden Ball, but again you're more likely to see someone from one of the finalists claim the top prize.

Out of the two sides that contested the final then it's hard to look outside of either Thomas Muller, Mats Hummels or Toni Kroos from Germany. All of which were excellent right throughout the tournament. Even on the Argentina side you could argue that Javier Mascherano had more consistently good performances than Messi.

Whenever something shady happens in football a friend of mine will say, "There's some FIFA'ing going on here." Without getting into too many X-Files style conspiracy theories, he means that the FIFA big shots have pulled a fast one. This best player award certainly looks like that's the case here.

It sort of feels like the owner of a fast food joint giving the Employee of the Month award, for the fifth straight month, to his dimwitted son Cecil.

Perhaps, as Russell Brand suggested "they just gave Lionel Messi the award for being Lionel Messi" and we can leave it at that.

Whatever way you look at it, I think it stinks worse than Cecil's underpants after he craps himself when the drive through line backs up at 6pm on a Friday. 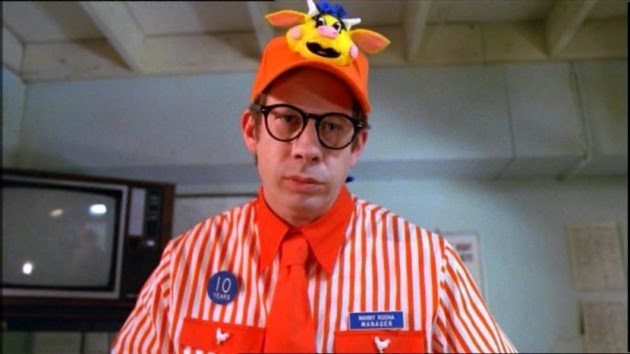