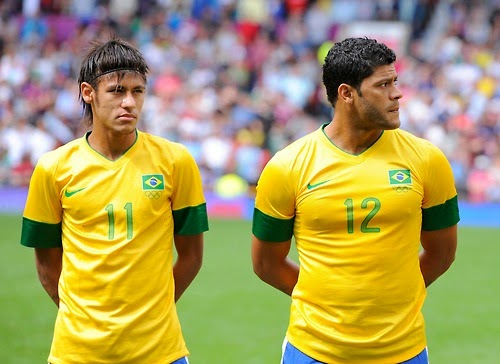 Neymar’s agent took to twitter to show how displeased he is with Scolari and the result of the semi-finals game between Brazil and Germany.

The humiliating defeat by Brazil yesterday against Germany in the semi-finals of the World Cup was bound to have ripples throughout the Brazilian footballing world. Most have criticized Scolari for the horrendous performance of the national team, and one of those people was Wagner Ribeiro, no other than Neymar and Hulk’s agent.

He took it to twitter to show his displeasure with the Brazilian coach and posted a list of six pre-requisites that one needs to have in order to be the Brazilian national team coach.

Below is a translation of the twitter message posted by Wagner Ribeiro:

“6 pre-requisites to be coach of the Brazilian national team:

1. Coach the Portuguese national team and not win anything

2. Go to Chelsea and be fired from the job

4. Come back to Brazil, coach a big team and relegate them to the 2nd division

5. Resign 56 days before the end of the league to avoid coaching a team in the 2nd division 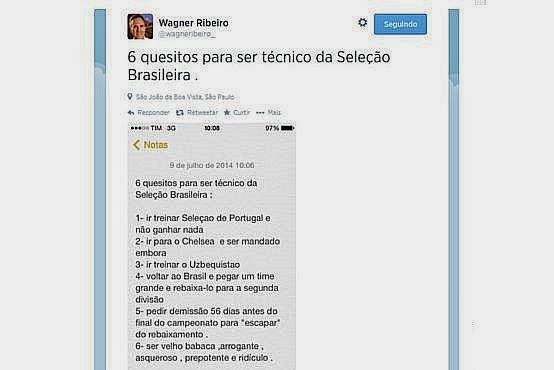 Alright, now that Wagner told us all of that, I wish he could tell us how he really feels.


I am not going to sit here and defend Scolari, I don’t think he is a great coach, but he is not horrible either. The loss to Germany was bound to leave marks and heads will roll for sure, but for a player agent to go on Twitter and blast the national team coach it shows some lack of class from the agent.

It is fine if you feel that way, but you should have a filter stopping you from looking like an even bigger ass than the one you are calling out.