Funniest Things We've Seen or Heard at a Football Ground


Sometimes the humor can stray into "offside" territory and be a bit on the offensive side, but often you'll hear or see things at a match that will not only make you laugh but will have you referencing it for years to come.

The following are some of the funnier things three of our contributors have seen or heard at matches over the years.

"Take that, you pottery making bastards!" - Yelled by a group of Walsall fans at Stoke City, "The Potters", supporters after a later equalizer for the West Midlands club.

"John Carew, Carew. He likes a lap-dance or two. He might even pay for you. John Carew, Carew" - Sung to the tune of 'Que Sera Sera' by Doris Day, by Aston Villa fans after their striker was caught at a gentleman's club.

"Efan Ekoku! I know your sister... Effin' Hell!" - Yelled by a Manchester United fan within earshot of the former Wimbledon player as he warmed up.

Following a match between Toronto FC and the Chicago Fire, several of the Fire's unused subs came onto the pitch for a warm down. One of my friends started yelling abuse at former Toronto FC player Dan Gargan, when all of a sudden Gargan stopped running and directed a D-Generation X Crotch Chop in his direction.

And, this banner directed at Columbus Crew fans by Toronto FC supporters: 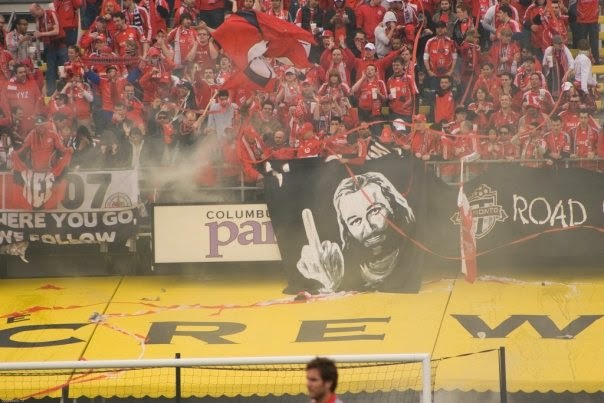 "Where's our ice cream, goalkeeper?" - While attending a cup match in Israel, this was shouted at Liran Strauber (the opposition goalkeeper) throughout the match. This was due to the fact that Strauber, who would go on to play for the Israeli national team some years later, shared his last name with a popular ice-cream brand.

"F--k off, you're not in a movie theater" - At a World Cup qualifying match between Israel and Cyprus I heard one fan say this to the other, when he was asked to get out of his seat. See in Israel even the smallest movie theaters (at least used to) have seat numbers when you purchased your tickets. In the stands however, although official seat numbers exist, many chose to ignore them.

"You're shit for our club and shit for our country, we need to sell you and get you a different passport" - A fan yelling at a player at a Ukrainian football match.

During the very financially-unstable days of Ukrainian 2nd tier side (and my hometown team) FSC Bukovyna Chernivtsi in the early 2000's, the gates to the team's stadium would often stay open around the clock, whether there was a match to be played or not. The local "bottle dependent" citizens would take advantage of the 12,000 seat Bukovyna Stadium as a rest-stop for long hangover naps. Sometimes they would be greeted by the 500-1000 home supporters with loud chants and songs during a match, and the often irritated "why are you yelling in my house" type of look on their face was something worth seeing.

Once at a very rainy match I saw a supporter throw a full roll of very wet toilet paper at a player taking a corner kick. The roll hit the player straight on the back and it was so wet that it actually made a splash once it came in contact with him. (The person who threw the roll may, or may not have been me). 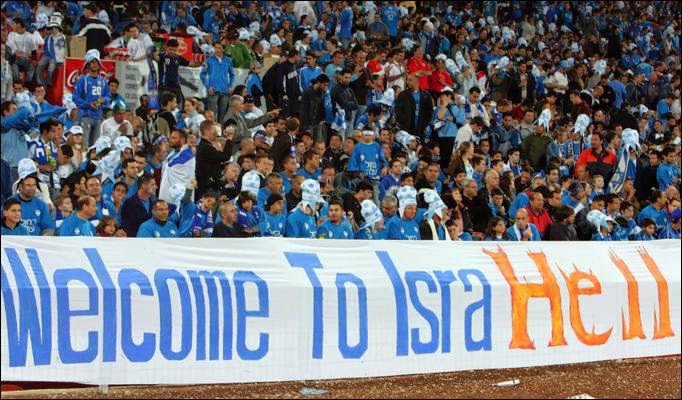 "Yo linesman, since you are not using that flag to call offsides why don't you stick it up your ass?" - A Benfica fan yelled that at a linesman during the last home game of the season at the Stadium of Light. Final score was 1-1.

"No means no! No means no!" - Toronto FC fans yelled those words at Freddy Montero as he is warming up on the sideline at BMO Field. He had been accused of rape in the weeks leading up to that match.

Benfica was playing an away match at Porto, which they would end up losing 5-0. Roberto, the Benfica keeper, was known for letting some easy goals in, which in Portugal is referred to as "Frango" (chicken in English). So when the score was 3-0 the Porto ultras who stood behind the net used by Roberto, let a live chicken loose on the field, forcing the security guards to run after it and interrupting the match. 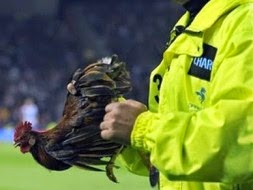