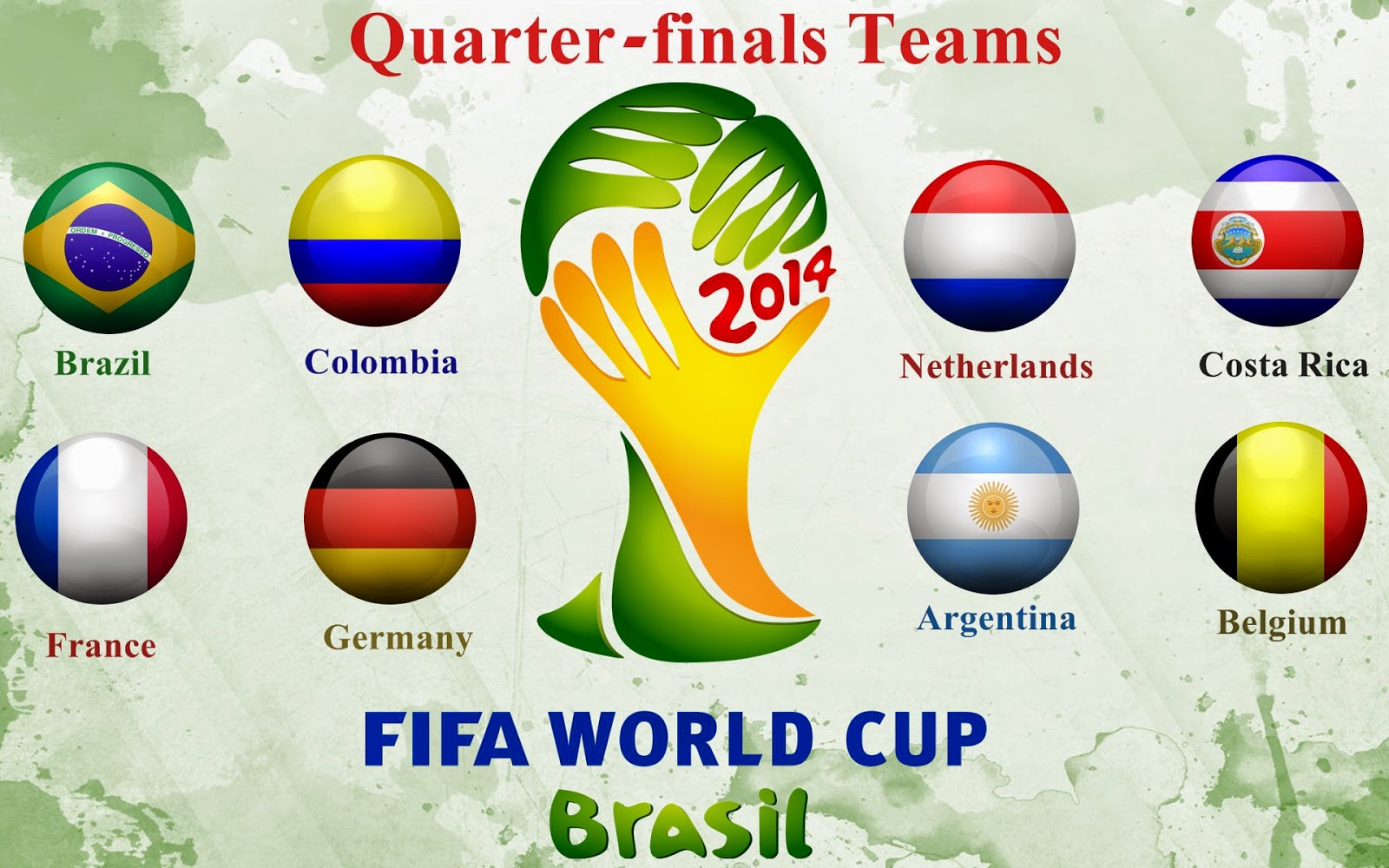 For the first time ever in World Cup history the field of eight teams will consist of the eight group winners. Keep in mind that the format of eight groups only came into existence in France 1998, which means that this is only the fifth tournament with this format, but nonetheless. Our guys give their predictions.

But first, let's take up how they did in the previous round.

Round of 16 prediction results:

KON: With Chile unable to surprise and with little confidence in Costa Rica Kon picked 6 of the 8 matches correctly, although he could not pinpoint a single correct score. [Match Outcome: 6/8, Correct Scores 0/8]

PEDRO: Pedro also got 6 of 8 correctly. Also picking Chile to knockout the hosts and Algeria to shock the Germans. Unlike Kon however, Pedro did predict the correct scoreline for Colombia's 2-0 win over Uruguay. [Match Outcome: 6/8, Correct Score: 1/8]

IAIN: In the group stages Iain couldn't get a prediction right if his life depended on it, but in the round of 16 he is the hands down winner with predictions that could make FIFA investigate him instead of Cameroon for match fixing. He did get one wrong picking the US to defeat Belgium on penalty-kicks, which is pretty much as close as you can get being wrong. But not only did Iain had seven of eight outcomes correct, he also predicted five of the eight scores correctly as well (if you consider a PK win as an extra goal of course, with Brazil and Costa Rica being 2-1 victors). But even if you don't like counting it like that it is still three of eight exact score picks, pretty impressive Iain! [Match Outcome: 7/8, Correct Scores: 5/8]

Kon: This stage is very hard to predict. I liked the French to get pretty far before the tournament started, but did not have enough faith in them to put it on paper, to be honest. Now that they are here I'd like to pick them for the win, especially after the Germans didn't impress me enough in their match against Algeria. That said, looking at the match-ups on the field I do like the German midfield against the French and think they will be able to control the all important "spine". I am going with my gut feeling here and predict a German triumph, even though as a whole I do like the French just a bit more this year. [Final Score: France 0-1 Germany]

Pedro: From what I have seen from both teams, I think France will have the edge in this game. Germany hasn't looked like a real team since their demolishing of Portugal in the first game of the group stages, on the other hand France has looked like a team ready to face anybody. I like France's midfield over Germany's, and Benzema and Giroud are working well together up front. France's defense has been the better of the two teams so for me the best team overall will win and it will be France.  [Final Score: France 2-1 Germany]

Iain: This one is a very difficult one to predict. Going into the tournament, Germany were seen as the European side that would likely go the furthest in the tournament and were perhaps one of the favorites to win the whole thing. France on the other hand have a history of imploding at International tournaments, so no one knew what to expect from them. France have been terrific so far in this tournament, but you could argue that they haven't been truly tested yet. This will be a massive test to say the least. The slow German back line does concern me a bit, but I just think that they have enough experience in their ranks to edge this one.
[Final Score: France 1-2 Germany]

Kon: I will keep picking the hosts to crash out for as long as they keep playing whatever it is this this style of football is called that they are playing at the moment. Brazil? They are not living up to the crest that is on the shirts they are wearing. Colombia on the other hand is exciting, the same way Chile was, but perhaps a bit better. With James Rodriguez performing the way he is I would love to see him go through as far as he can. [Final Score: Brazil 1-2 Colombia]

Pedro: I have been a huge fan of Colombia since the start of the tournament, and at this point if there is a team capable of beating the host nation it's them. James Rodriguez has been not only the MVP of the tournament but is also the leading scorer, and with the help of Yepes in defense and Cuadrado in the midfield this is a very cohesive team. Neymar alone won't be enough to stop Colombia.  [Final Score: Brazil 1-3 Colombia]

Iain: I had originally picked Brazil to win the tournament, but they have done nothing to impress me so far, other than get the ball to the brilliant Neymar. Brazil look very nervy at the back and I've never seen a Brazilian side with such a horrific collection of strikers in the hapless Fred and the clueless Jo. Colombia have been the team of the tournament for me and I expect them to put Brazil out in a thrilling encounter.
[Final Score: Brazil 1-2 Colombia]

Kon: Just like with Brazil, I can't wait to see Argentina out of this tournament already. They have looked flat all along and they haven't even played a "major" squad. I can't say that Belgium with all their star players have impressed me immensely, nonetheless, they are stronger than the Swiss were and we all saw that a bit of resilience can go a long way against the Argentines. [Argentina 1-1 Belgium, Belgium wins on PK]

Pedro: Argentina hasn't looked spectacular during the tournament so far, but Messi has found ways of winning games and pushing them to the next rounds. On the other side you have a Belgium team full of talent, but not firing on all cylinders. Hazard has not been at his best and they have had problems getting goals from their forwards. This will be a low scoring affair, but I expect Messi to once again resolve it for Argentina. [Argentina 1-0 Belgium]

Iain: Argentina have looked pretty poor throughout this tournament, and like Brazil have relied on Neymar, Argentina have leaned heavily on Messi to drag them through. Belgium have been a bit disappointing themselves for a side that everyone predicted to be an exciting dark horse. That being said, they did put in a good performance against the United States. I expect Argentina to just about squeak through this one, but it won't be pretty.
[Argentina 1-0 Belgium]

Kon: The Ticos have moved on further than their wildest dreams already, and again, as much as I would love to see them go even further I cannot imagine them pulling a miracle against the mighty Dutch. Sure, van Gaal's side had some difficulty against the Mexicans, but the Costa Ricans had trouble of their own against the less than stellar Greeks. I see this one being over and done with without the need for extra-time or shootouts, with a fairly comfortable win for the Oranje. [Final Score: Netherlands 2-0 Costa Rica]

Pedro: Costa Rica is without a doubt the surprise of the tournament, and I don't think their surprising ways are over yet. Riding a hot goalkeeper in Keylan Navas this team has all the tools they need to beat Netherlands. They have shown against Mexico their difficulties in breaking down defensive sides that break quick on counter attacks. That is how I expect Costa Rica to play in this game, strong defense and quick counters. I think we will see another upset by Costa Rica. [Final Score: Netherlands 0-1 Costa Rica]

Iain: The Ticos have had the greatest tournament in their countries football history, but this will be the end of the road for them I'm afraid. The Netherlands have had a few struggles after their terrific 5-1 hammering of Spain in their opener, but they've found ways to win and I'm confident they will do here as well. The Dutch have just too much quality in their ranks and will win this one comfortably.
[Final Score: Netherlands 3-0 Costa Rica]
SHARE SHARE SHARE