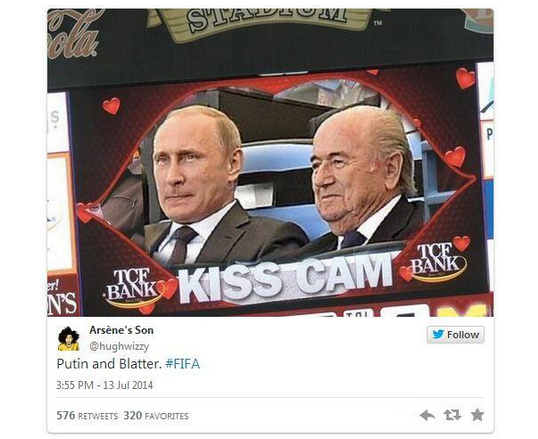 With the World Cup drawing to a close this past Sunday, we took some time to capture our favourite tweets from the knockout rounds.

If you missed our favourite tweets from the group stage, you can check them out here.

These tweets, from writers, celebrities and fans, often capture the events on and off the pitch as they occur in a unique lens and are of course completely uncensored. If you come across any gems that we've missed, feel free to copy them into the comments below.

The Round of 16 Kicks Off

Ochoa is great in this World Cup, but I preferred him as the love interest in Good Will Hunting.
— Nooruddean (@BeardedGenius) June 29, 2014


love this well-drilled brazilian defence,. Thiago Silva appealed for offside there and turned round to see Luiz 15 yards behind him
— Dion Fanning (@dionfanning) June 28, 2014


David Moyes has just sat back on his sofa and declared "This is much more like it" about the Costa Rica v Greece game.
— pauliegunn (@PaulGunning1) June 29, 2014


More Americans Fall in Love With the Beautiful Game

New American fans: this is what soccer is like. It kills you, and you die, and sometimes it's beautiful, and then you do it again next week.
— Brian Phillips (@runofplay) July 1, 2014


Good to see that even @BarackObama was getting into the match last night: pic.twitter.com/bGRAbQExLH
— David Squires (@squires_david) July 2, 2014


Germany Start to Emerge as Favourites at the Quarter Final Stage

This is the #Germany we were all expecting….looking sharper than a porcupines backside today.
— Ray Hudson (@RayHudson) July 4, 2014


The Signing of World Cup Stars (and Villains) Begins


When #mufc sold Ronaldo, someone at club said: "It was a rocky marriage but the sex was great." Analogy works even better for Suarez at #LFC
— Oliver Kay (@OliverKayTimes) July 11, 2014


When I left Liverpool not many people thought I could have been replaced. Liverpool will survive without Suarez
— Titi Camara (@TitiCamara22) July 7, 2014


No Redemption for Brazil in the Third Place Match

Admitting your watching the World Cup 3rd place play off is like confessing to having seen a Transformers DVD with director's commentary.
— Irvine Welsh (@WelshIrvine) July 12, 2014


"I am tempted to watch this but there is a finite number of times you can see Fred, Hulk and Oscar make cunts of themselves." - Neymar
— Irvine Welsh (@WelshIrvine) July 12, 2014


If I was the Brazil boss, I'd plunge my finger into my own arse, then put it under the nose of each player. It's the only way they'll learn.
— notBigSam (@TheBig_Sam) July 12, 2014


If I was Scolari, I’d just slip out now while everyone’s watching the replay.
— Iain Macintosh (@iainmacintosh) July 12, 2014


And in the End the World Cup Goes to Germany