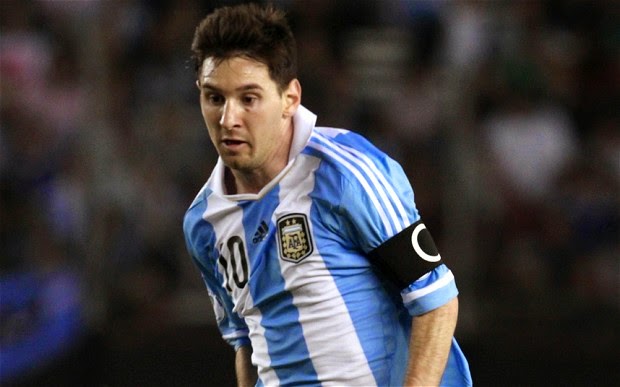 You would think that, arguably, the best player in the world would be loved in his home country of Argentina, but this isn’t the case.


Lionel Messi is one of the most adored players in the world today. He has won the Ballon d’Or for four consecutive years, he has helped Barcelona become a winning machine, with complete domination in the domestic Spanish league. He has helped them win the Champions League, earning him a $20 million dollar annually until 2018 according to Forbes magazine. He has Europe at his feet and most of the footballing world. I say most, since Argentina is not convinced.

We can look at several factors as the main causes for such a divide when it comes to Argentinians and Messi. Why is he not as loved at home as he is abroad?

Several football experts look at the fact that he left Argentina at the age of 12 to move to Spain and play for Barcelona. He has never played in the domestic league and therefore has not cultivated his roots within his own country. In other words, he isn’t Argentinian enough.
He left his country at a young age, doesn’t really have his roots in Argentina, since he has made his entire professional career and has lived the majority of his life in Spain. When you combine that with the fact that is yet to perform for Argentina as he has done for Barcelona, it leaves Argentinians with a sour taste in their mouths.

Messi played his first World Cup in 2006 in Germany. He was too young to have a real impact in his first go. He was used more as a bench player and coming from an injury he wasn’t 100% to really be the impactful player we knew he could be. He didn’t play the quarter final match against Germany, which they would end up losing 4-2 on penalties.

Four years later in 2010 World Cup in South Africa, he was already a legend in the footballing world. This was his World Cup. Diego Maradona was the coach and Messi in his prime, everyone had all the chips in on Argentina, but yet, this wasn’t to be. Argentina lost to Germany in the quarter finals for a heavy 4-0 result. Once again Messi, failed to deliver in the big stage for his native land. This had his critics once again voicing their displeasure with the Argentinian star.

This year, I am not sure the expectations on him are as high. At least not from a fans perspective, from his perspective I believe the pressure to succeed has never been this high. A World Cup trophy is all that he is missing; he has pretty much won everything else.
2014 won’t be his last World Cup, but at 26 years old, this will probably be his best chance at winning one. In a group with Bosnia Herzegovina, Nigeria and Iran, nobody is expecting Argentina to finish anywhere but first. If Messi is able to play injury free and at the level he has accustomed us, we should see them going deep into the tournament and even a final. I am sure Messi is well aware of this situation. 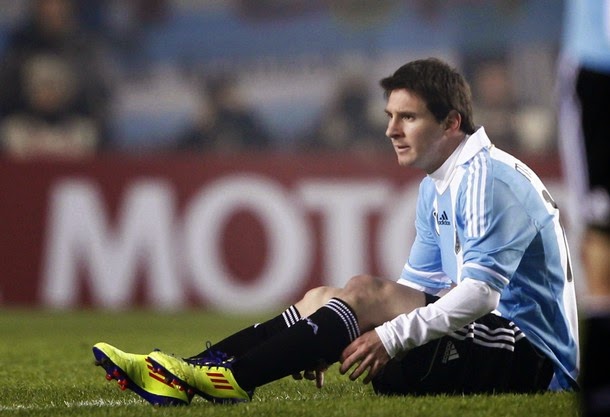 Messi has been filmed and photographed vomiting during matches with both Argentina and Barcelona. The latest incident happened during Argentina’s last warm-up game leading into the World Cup. He came in as a second half sub and minutes later he was bending over and vomiting on the field.
Alejandro Sabella, his national team coach, has blamed this on nerves. You would think a player of his ability and with the experience he has at both club and country, would not be vomiting due to nerves. Considering this was a friendly, it makes you wonder even more on how realistic this assessment is. 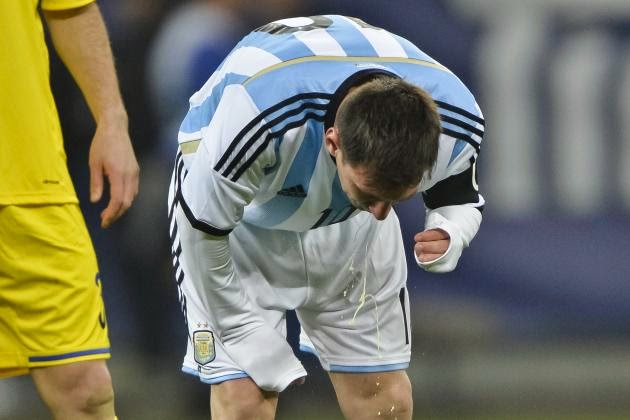 Having said that we all know the pressure he is under at this World Cup. His legacy while not in danger could be tarnish if he manages to finish his career without ever winning a World Cup with Argentina.

I believe Argentina fans believe they can win the tournament, what I don’t think they believe in is how much can Messi help them do it.
SHARE SHARE SHARE