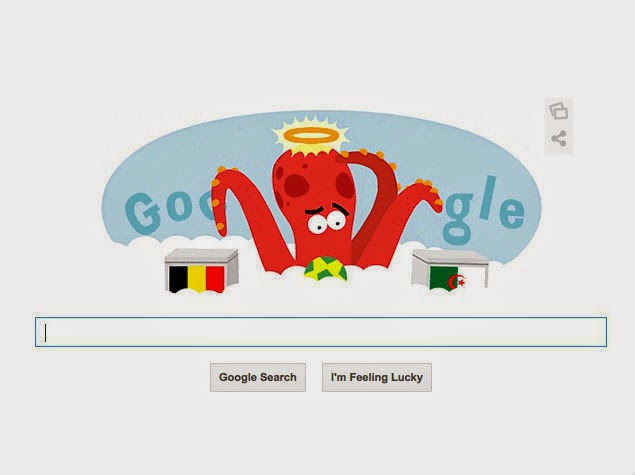 It seems like we have gone from psychic hotlines to psychic animals, but when it comes to taking a shot at guessing a winner of a World Cup, anything goes.


Paul was the first animal psychic of his kind. He lived in the Sea Life Centre in Oberhausen, Germany and spent his days predicting results of football matches. He gain notoriety during the 2008 Euro Cup, co-hosted by Austria and Switzerland, and two years later he took his talents to the 2010 World Cup in South Africa.

More people followed Paul’s predictions than nut jobs follow Nostradamus.  Paul, the octopus, became a phenomenon of global proportions.  Every day during those two tournaments he would be picking between two boxes that had the country flag on it. The one he picked would win the match. He had an incredible run with an un-matching record of 12 correct predictions out of 14. Not even the best psychic hotline can offer you that kind of result.

Paul would die in 2010, but the animal psychic is a trend that has continued into this World Cup in Brazil, or it wouldn’t be a major football tournament without one of these animals telling us who will win. 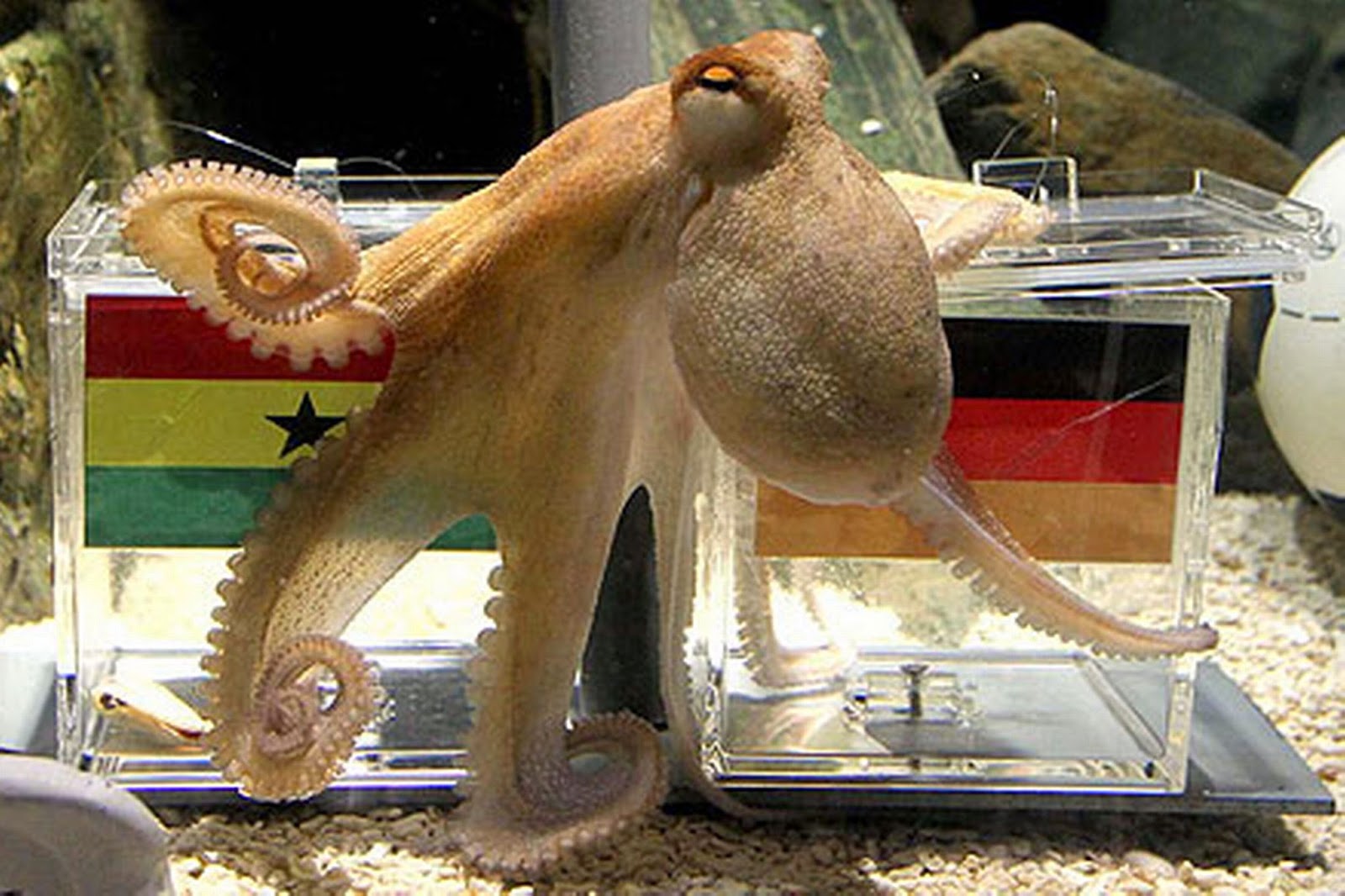 Since Paul, no other animal has reached his status or efficiency, but they are trying. This year in Brazil we have a turtle. The turtles name is Cabecao, which means big head in Portuguese. The turtle is only picking Brazil’s games, so its psychic powers are limited when compared with the great Paul, the octopus. For now the turtle has a perfect score, but let’s face it, if it wants to become a legend in the animal psychic world it will need to expand its horizons. 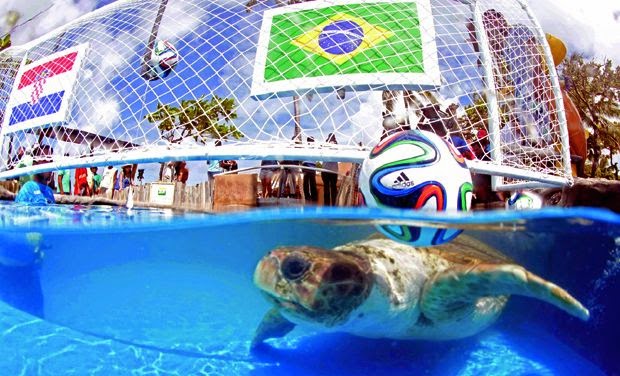 There is also Shaheen, the camel. He seems to be a bit broader than its counterpart, the turtle. So far it is 4 for 5 with the only blemish being picking Portugal to defeat Germany. I guess, he is also a fan of Cristiano Ronaldo and his hairstyles, proving that even psychics have bad taste. 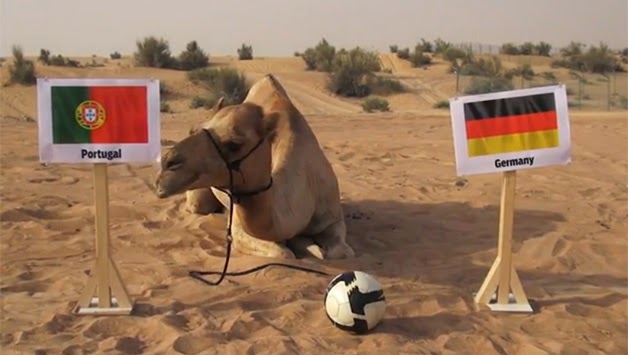 A heavy weight of the animal psychic world is Nelly, the elephant. Nelly predicted the winner of the 2010 World Cup, Euro 2012 and the Champions League final of 2013. Nelly also has a weakness for Cristiano Ronaldo, he seems to be as big of a hit with the ladies as he is with the animals. Nelly predicted Ronaldo and Portugal to tie Germany and victories against Ghana and USA. Poor Nelly, she will be crying even more than Cristiano Ronaldo when they leave the tournament on Thursday.

Last but not least is Flopsy, the kangaroo. Crocodile Hunter’s daughter, Bindi Irwin works at the Australian Zoo where she works with Flopsy on picking the results of matches for the 2014 World Cup. Flopsy picks food from a bowl that is marked with the country’s flag. Flopsy is a bit of a flop, it picked Portugal to defeat Germany and Australia to defeat Netherlands. Here we have another psychic animal with a weakness for Cristiano Ronaldo. 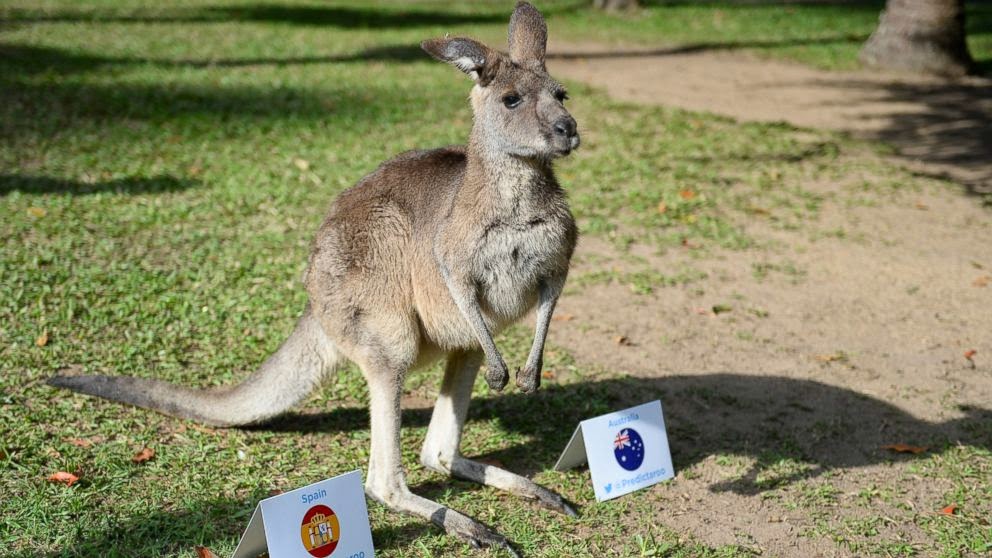 If one thing these animals all seem to have in common is a “love affair” with Cristiano Ronaldo. His sex appeal has no boundaries and it moves from the human realm to the animal kingdom. He might be the first human to seduce females of all species. If we are to send a probe into space looking for alien life we should send it with his picture, for sure this will result in a positive and lovely first encounter of the third kind.
SHARE SHARE SHARE