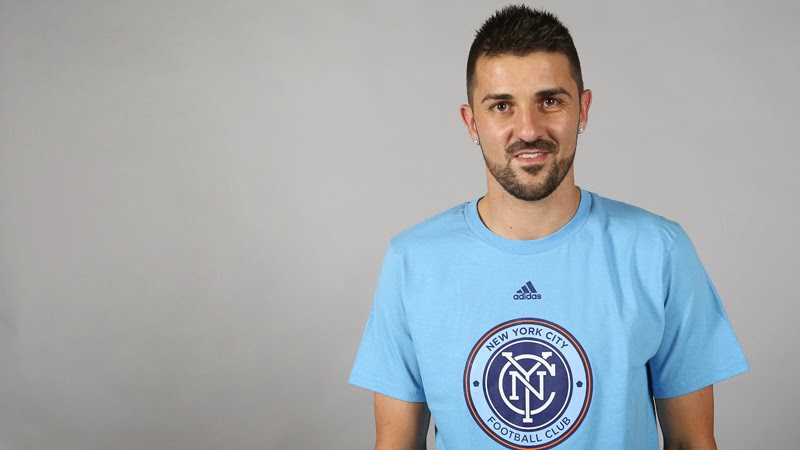 It has been widely reported in the past few days that both David Villa and Frank Lampard are on their way to New York (David Villa officially signed for NYCFC earlier today), where they will most likely finish their professional footballing career with a new Major League Soccer club New York City FC (owned by Manchester City). With that in mind, we have compiled a list of the 50 most famous international footballers that have made their way to play in the MLS since its inaugural season in 1996. While some had difficult time adjusting to the North American league, others took advantage of the opportunity and not only extended their professional careers, but did so very successfully.

Here are the first 14, in alphabetical order from A through D. 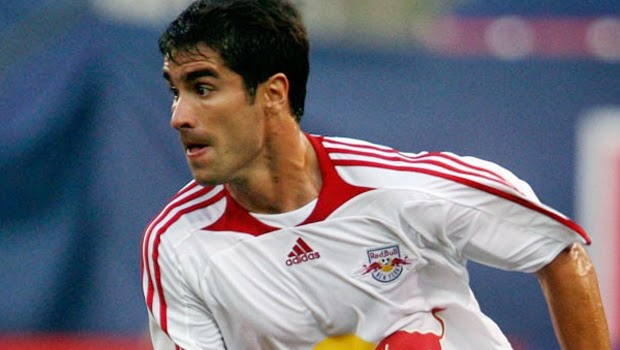 Ángel joined the MLS in 2007 at the age of 32. After a successful career with Argentine side River Plate and later with English club Aston Villa, Ángel made his way across the ocean for a stint in New York City that would last 3 years, and a 5 year total in Major League Soccer. In the 5 seasons Ángel spent in North America, he had scored an impressive total of 72 league goals. Ángel has recorded 9 goals in his 33 matches with national side Colombia. 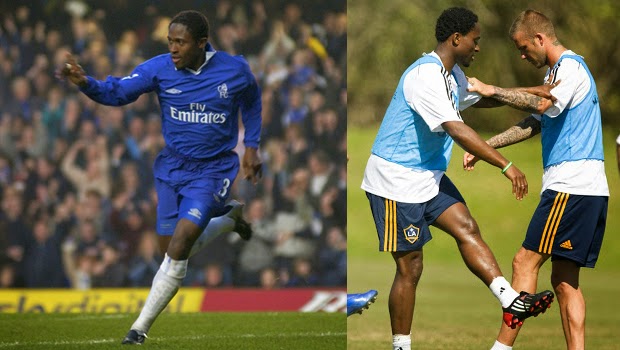 Babayaro's MLS career lasted one pre-season and all of 45 minutes of match-action in a friendly fixture, but when his signing was announced it was seen as an impressive one for the LA Galaxy with Babayaro bringing along an impressive CV from his playing days at Anderlecht, Chelsea FC and Newcastle United. The cocky Nigerian would go on to complain about the team's flight arrangements and hotel accommodations while on the road, so after his one half appearance (in which he conceded a yellow-card and gave away a penalty-kick) the club decided to let him leave to "greener pastures". Now, we all know Karma is a bitch, and she (I think Karma is a "she") was watching Babayaro's every move it seems, because after leaving LA, Celestine would never again play professional football and eventually would officially retire from the game two years later. 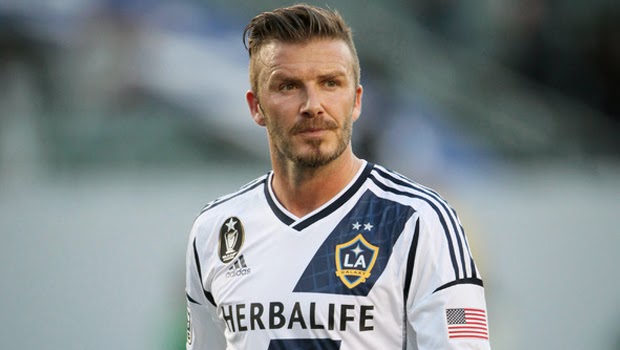 Of course, the biggest high-profile footballer to join an MLS outfit was David Beckham. When he joined the Galaxy in 2007 at the age of 32 after spending the previous 4 years with Spanish giants Real Madrid, and 11 years with English power-house Manchester United. Needless to say, Beckham's signing made front-page news all over the world and provided Major League Soccer with global exposure unlike ever before. Beckham spent 5 seasons in LA in which he played 98 league matches and helped the Loas Angeles club to 2 MLS Cup titles. But even at the age of 37 the Galaxy would not be Beckham's last professional club, as the Englishman moved to France where he retired from professional football  while playing for Paris Saint-German in 2013. Beckham stays involved with the MLS as an owner of a new franchise in Miami, Florida. 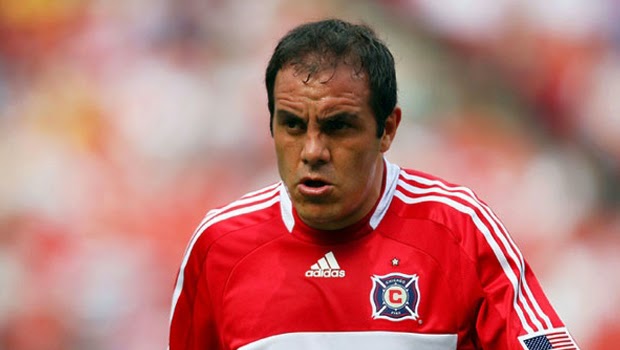 Blanco signed for the Chicago Fire in 2007 when he was 34 years old. He spent two seasons with the MLS club, scoring 16 goals in 62 league appearances. The Mexican international footballer was a very highly-rated signing, and while in Major League Soccer was the second highest paid player in the league behind David Beckham. Now at 41, Blanco is still an active player with Mexican outfit Peubla FC. 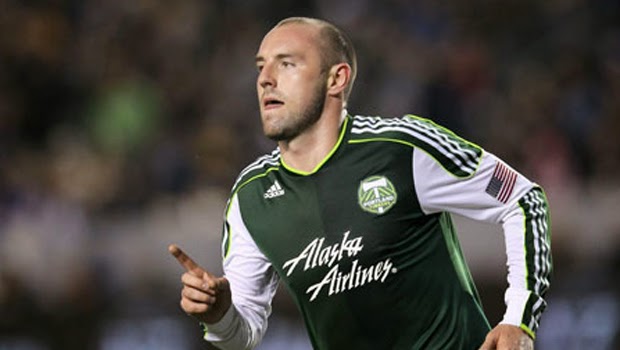 In 2012 Scottish national Kris Boyd made his way to America to play for the Portland Timbers at the age of 29, coming from Turkish club Eskişehirspor. Previously,  Boyd spent most of his career with Scotland's premier league clubs Kilmarnock and Glasgow Rangers. In his first (and only) season with the Timbers, Boyd appeared in 26 league matches for the club. After his release, Kris Boyd went back to his home country and rejoined his youth and first professional club Kilmarnock. Boyd has yet to officially retire from Scotland's national team and although his last call-up to the national side was just recently in 2013, the last time he saw match action with the squad was back in 2010. 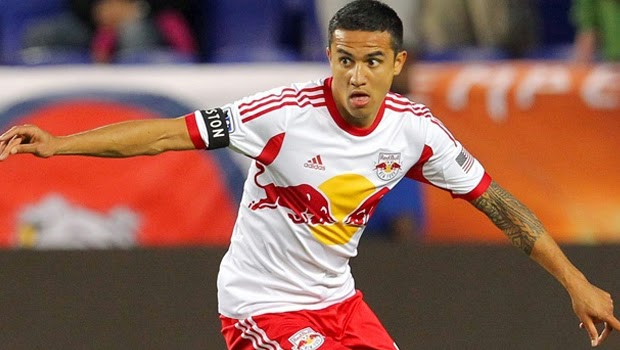 After an impressive 14 year professional career with Millwall and Everton in England, Tim Cahill signed with the New York Red Bulls at the age of 32 in 2012. Two years later Cahill is still an active player in the MLS with the New York club, and will be representing Major League Soccer at this summer's World Cup in Brazil with his national side Australia. To-date, Cahill is just 4 appearances shy of his 50th in MLS. In October of 2013, Cahill scored just 7 seconds after kick-off, recording the fastest goal in Major League Soccer play. 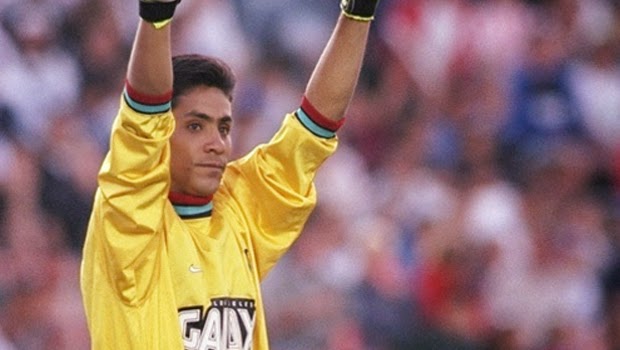 The eccentric Mexican goalkeeper came over to the MLS in its inaugural season in 1996. At only 30 years of age, Campos was very much still in his prime and excelled with the Galaxy. But his stint in California did not last particularly long, and Campos left back to his native Mexico (not before appearing in 8 matches for the Chicago Fire though) perhaps because the Major League Soccer clubs wouldn't let him design his own jerseys or sometimes play as a striker (both things were something Campos has done on numerous occasions while playing in Mexico). 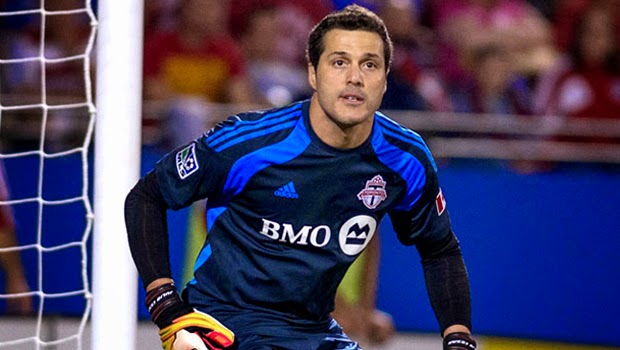 Júlio César Soares de Espíndola (yes, very long full name) is a world-class goalkeeper who joined the Canadian MLS side in Toronto before the start of the 2014 season, on loan from his current club Queens Park Rangers. Cesar is a UEFA Champions League winner with Inter Milan and is the starting goalkeeper for the Brazilian national team in this year's FIFA World Cup. César played 7 matches for TFC before leaving to the Brazilian World Cup training camp. It is not 100% clear at this point, but it looks more likely than not, that César will be going straight back to London to rejoin QPR after the World Cup. 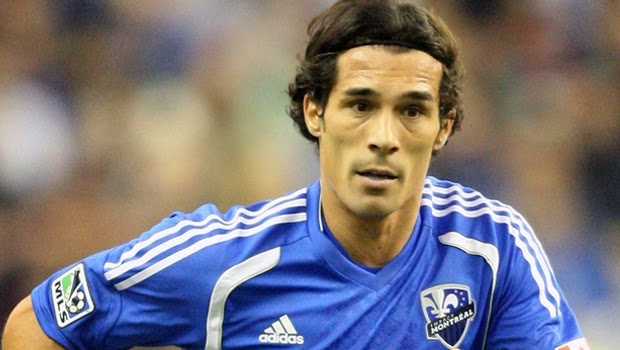 Before joining the Montreal Impact Bernardo Corradi spent most of his 17 year professional football career in Italy. With previous experience with clubs like Udinese, Lazio, Parma, Valencia and Manchester City, Corrradi is quite a big name coming over to the MLS, although his signing did fly a bit "under the radar". Playing just that one year with the club from Montreal, Canada, at the age of 36, the Italian striker  managed to find the back of the net 4 times in 11 league matches. Released by the Montreal club that same year, Corradi is not officially retired, but could not find another club after leaving Canada 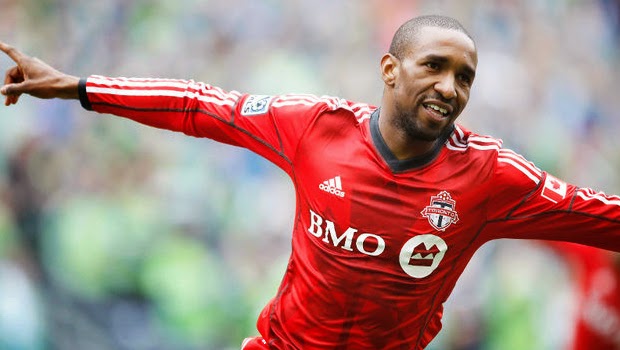 "It's a bloody big deal", was the name of the campaign introducing the English striker (together with the signing of American midfielder Michael Bradley) to the Toronto FC faithful, and a "bloody big deal" it's proving to be indeed (at least so far). Defoe, who spent a combined 9 years with Tottenham over two stints (while taking a year off to join Portsmouth) has only had 7 matches wearing the TFC red, but has impressed greatly averaging almost a goal per game with 6 scored in 7 fixtures so far for the Canadian MLS club. Although Defoe is quickly proving to be a very good Major League striker however, his dreams of joining the Three Lions in this year's World Cup in Brazil came to a halt when England manager Roy Hodgson simply did not call him up to join the squad. Maybe its for the best as the club from Toronto will need all the help they can get to achieve a first playoff spot in franchise history. 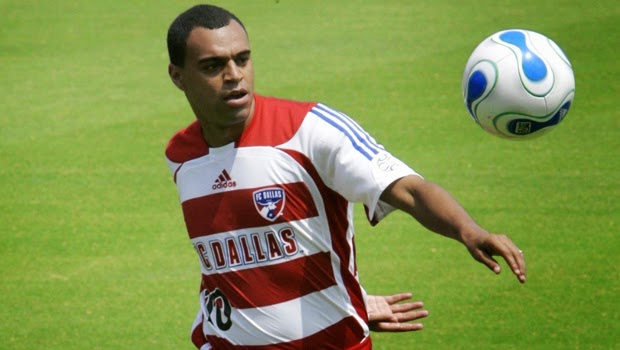 Runner-up in 1998, and winner of the 2002 World Cup trophy with his national team Brazil, Denilson was too a "bloody big deal" as a signing for the North American league. Denilson joined FC Dallas at the age of 30, which compared to a few other "older" successful MLS players didn't seem all that bad at all. We all have learned over the years however that for some reason Brazilian "superstars" age quicker than anyone else, so after 8 matches played, and just one goal scored, Denilson was released by the club and moved back to Brazil. He played a bit in his home country and eventually retired while officially being a part of some squad that nobody cares about in the lower leagues of Greek football. 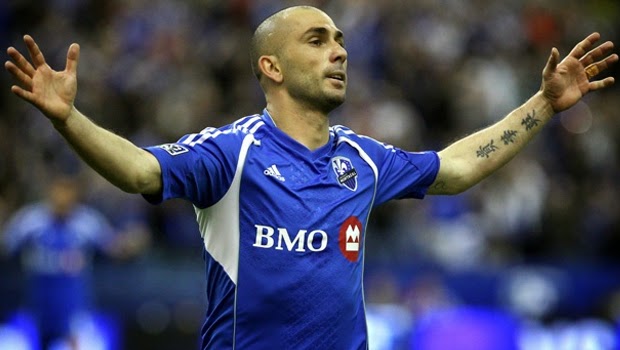 A bit higher profile than former  teammate Corradi, Di Vaio was another Italian to join the "Impact de Montreal" in 2012. Di Vaio was already 35 (about to turn 36) at the time, but unlike Corradi he is still active and has had somewhat of a resurgence in his career thanks to him joining the MLS. His past with Juventus, AS Monaco, Valencia and Bologna has obviously taught him how to handle a Major League soccer caliber defense, because even at 37 Di Vaio holds a record of 26 goals in 57 matches with the club from Quebec. 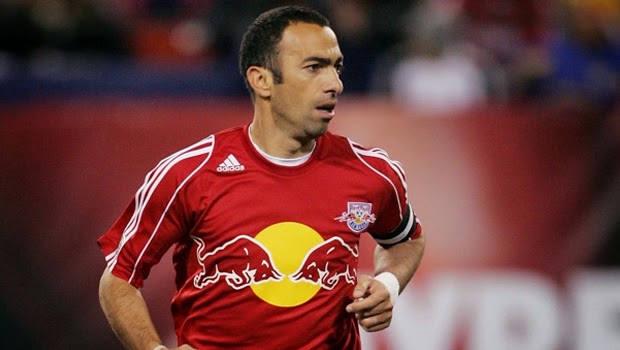 Winner of both the 1998 World Cup and the 2000 European cChampionships with France, Djorkaeff's move to the  re-branded New York Red Bulls of the MLS was quite simple to understand. The Frenchman came to America to make a bit of money, sell some of the new jerseys and retire from professional football. 40 mathces and 10 goals later the plan worked perfectly, as the New York club enjoyed Djorkaeff's popularity, while the French star striker got to make some money while living in the "land of opportunity". 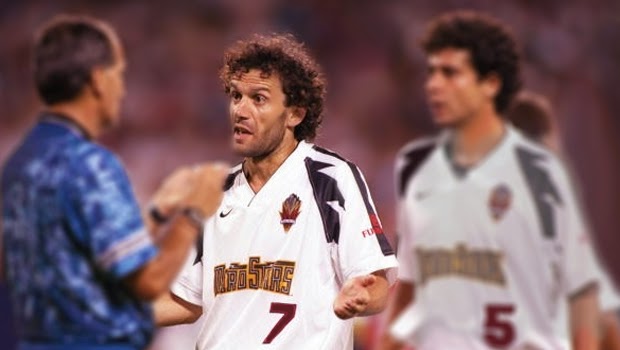 Donadoni was a huge international star when he joined the Metrostars in 1996. In his time with the MLS club, the Italian midfielder became the centerpiece of the club although he could not help them to a league title in his 49 caps. Famous for his playing days with AC Milan, the 33 year old played two seasons in America, before going back to his native Italy and playing for Milan again for two more yers, winning the Serie A once again.