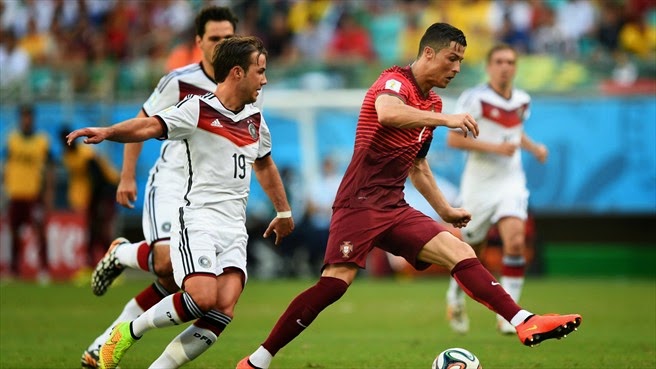 A true display of the "The Good, the Bad and the Ugly" in this clash between the Portuguese and the Germans. All eyes were on Cristiano Ronaldo, but it was Germany ("The Good") who looked well in the mood with an early display of skillful possesion play and precise passing. In just the 12th minute the Germans were able to create a  one on one chance on the back of an impressive passing combination. Portugal's Pereira had no choice but to take the German down in the box which resulted in a yellow card for the Portuguese, and a Goal for German Mueller from the penalty spot.

After the goal from the spot it reamained all the same, as Germany enjoyed most of the posession, with the Portuguese creating very few scoring chances. Ronaldo ("The Bad") still looked out of place, with the Portuguese electing to play through the right flank, instead of that where CR7 was situated. In the 30th minute another scoring chance for the Germans inside the Portuguese box was deflected for a corner kick. The set-play was curled perfectly into the box, where Mats Hummels took advantage with a run-on header to put Germany's second goal in the back of the Portuguese net.

Just 5 Minutes later Portuguese defender Pepe, would be involved in an episode that would prove crucial to the Portuguese demise in this match ("The Ugly"). After an arm to the face of Mueller, which was probably accidental, Pepe decided to approach the German and confront him for faking the hand-to-face contact. Pepe head-butted to the German while the man was still on the ground, resulting in a straight red-card, and Portugal being down to 10 men for the remainder of the fixture.

Before the end of the half, Thomas Mueller would score his second of the match, after he blocked a clearance attempt by the Portuguese defense, and then slotted the ball into the back of the net in the 45th minute, just before the break.

In the second half spectators did not enjoy the same quality of football, as it was obvious that the Germans were quite happy to just hold the ball, while the Portuguese were just hoping to preserve the goal difference and stop Germany from turning this match into a more embarrassing final. In the second half Cristiano Ronaldo had three opportunities to take a free-kick but he managed to put two of them straight into the German wall; the other was a pretty nice save from Neuer.

Mueller would record the first hat-trick of the 2014 World Cup in the 78th minute as he took advantage of a rebound from the Portuguese goalkeeper's save.

There was not a stretch in the match where Germany did not look dominating, and while they are off to a great start, there will be many questions the Portuguese will have to answer before their remaining two matches if they are hoping for these two not to be their last in this year's tournament. 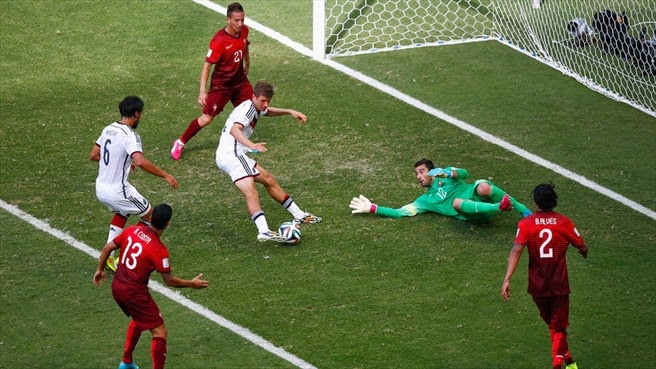 Iran and Nigeria played out the first match of the 2014 World Cup in which there were no goals scored, a very dull 0-0 draw. Especially after the first match of the day between Germany and Portugal, this fixture did not offer much in terms of creativity or precise ball distribution. Quite the opposite, this match was full of incomplete passes, shots off target and broken plays.

Nigeria did look the better of the two sides, controlling the ball for the majority of the match, but just like in the qualifying stages the "Super Eagles" were missing the strike force required to put the ball in the back of the net. Iran simply looked disorganized and individually some of the players looked selfish at times. Nigeria's keeper Enyeama was forced to make one good save from an Iranian corner, but otherwise was in-charge of mostly easy catches of high balls into his box. Nigeria had a total of 6 shots on goal, most of which did not bother the Iranian goalkeeper either.

This was the first scoreless affair and the first draw of FIFA World Cup 2014. 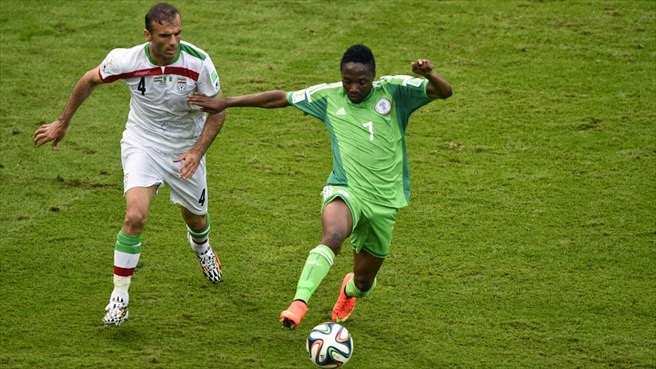 It seems that any kind of a half-decent performance would do for the final match of day 5 after the boring performance of Nigeria and Iran in the previous game. USA started the match with a bang, when captain Clint Dempsey controlled the ball well, got into the box and shot the ball in past goalkeeper Adam Kwarasey just 32 seconds from kick-off. But the early goal was a bit misleading as Ghana would enjoy more of the scoring chances and possession for the rest of the first-half. In the 23rd minute, Jurgen Klinsmann's side were forced to make their first substitution as striker Jozy Altidore seemed to pull his hamstring during a breakaway; Altidore was replaced with AZ Alkmaar striker Aron Johansson. It seemed that the American captain and goal scorer Dempsey would also be forced to leave the match early when he got caught with a high kick right on the nose. Dempsey went down with what seemed like a possible broken nose or at least a very bloody one, but remained on the pitch. After 5 added minutes and a couple more good chances for the African side, the first half finished with a 1-0 lead for the US.

In the second half Ghana started exactly where they left-off in the first. The Africans started pressing right away and created various goal-scoring chances with Asamoah Gyan testing Tim Howard on two occasions, with the American keeper being up to the task both times. The Americans looked content to keep the score at 1-0 and were playing nine or even ten players behind the ball almost the entire half. Michael Essien who did not start the match came on in the 71st minute, but instead of injecting his team with the energy they were looking for him to provide, the match dulled-down and even when it seemed like Ghana had created a scoring opportunity, "amateur" mistakes would prove to be the Africans' key for their inability to put one past Howard.

But in the 81st minute, Magic! Asamoah Gyan received a ball in the American box and with his back heel passed the ball right back to the provider, Andre Ayew. Ayew made no mistake, striking the ball with his left into the near side of the goal and the game was all tied up at 1-1. But just four minutes later, against the run of play, and just on their third corner kick of the match, the Americans managed to take a lead back when the head of defender John Brooks met the dangerously placed ball in to the box, putting the Americans at an advantage yet again with a 2-1 lead.

Perhaps the Americans did not fully deserve the full 3 points, but with a 2-1 final score they will look to take away the second spot in the "Group of Death" away from the Portuguese who suffered a big loss at the hands of the Germans a few hours earlier. 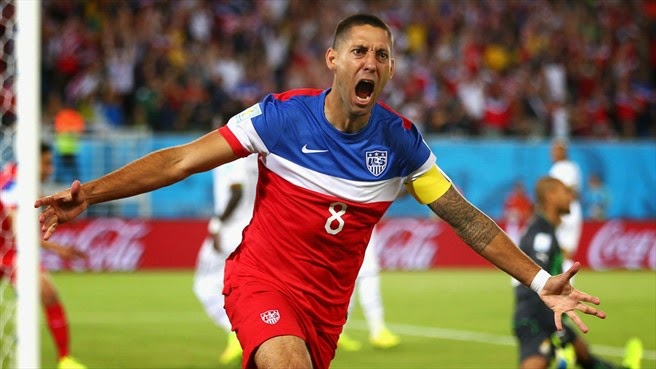